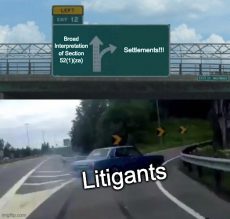 In May, 2022, we reported that the Delhi High Court appointed Prof. Arul Scaria, under Rule 31 of the IP Division Rules 2022, as an expert in a copyright dispute, for assistance in interpreting the nuances of Section 52(1)(za) of Copyright Act. Now after almost five months since the appointment, the Court has passed an order (pdf) stating that the parties to the dispute have settled the matter out of court. (Note: I couldn’t find a record of the terms of the settlement and would really appreciate it in case any reader has an idea about what the parties agreed to.) Recognizing the efforts undertaken by the expert, the Court did take the written submissions by Dr. Scaria on record, however, it cautioned that it is not ruling on the legal issue. In this post, I shall discuss in detail the submissions made by Prof. Scaria and the implications of the ruling by the court.

The dispute was brought by Phonographic Performance Rights Society (Plaintiff), a copyright society against Lookpart Exhibitions and Events Pvt. Ltd (Defendant), an event management company. Plaintiff alleged that Defendant’s unlicensed use of former’s sound recordings in commercial venues for events like weddings amount to infringement of its copyright. The Defendant on the other hand pled the exception of fair use under Section 52(1)(za), which protects unauthorized use of a protected work during any bonafide religious ceremony including marriage and its other social festivities, and argued that its use of the protected sound recording in events like weddings and associated ceremonies does not require it to take any licenses from the Plaintiff. While passing the earlier order in May, 2022, the Court observed that music is an intricate part of wedding ceremonies in India and would include aligned functions like sangeet and mehndi etc. Regardless, considering the large-scale implication of the issues involved, the Court appointed an expert (Prof Scaria) under the above rule, upon payment of due remuneration. The Court then mandated the appointed expert to “file a written note of submissions on the issue raised in the present case….consider the legislative history of the provision Section 52(1)(za) of the Copyright Act, 1957, and cite the relevant case law, from India and abroad on the question of fair use and fair dealing.”

On July 6, 2022, M/s. Novex Communications Pvt. Ltd. and The Indian Performing Right Society Limited (IPRS) sought intervention as interested parties in the suit, which was permitted by the court citing the nature of the issues involved. On October 10, 2022, the court was informed that the parties have agreed to settle the disputes amicably and in light thereof, the suit was withdrawn. However, acknowledging the assistance rendered by the appointed expert, the court took the written submission filed by Prof. Scaria on record and clarified that it has not considered the merits of the matter and is not ruling on the legal issue.

Written Submission by the Expert

The 85-page document submitted by Prof. Scaria is perhaps the most detailed and nuanced assessment of Section 52(1)(za). The submission encapsulates the legislative history and essential case laws from India and abroad as well as an assessment of international practices and foreseeable ramifications of a narrow interpretation of Section 52(1)(za). The notable findings/ recommendations from the report are summarised below: –

However, owing to the settlement in the present case, these cases are still the relevant precedents for interpreting Section 52(1)(za), which unfortunately renders the whole exercise of appointing an expert and taking the submissions on record largely futile. It wouldn’t take much to guess as to the reasons for preferring a settlement here. In the previous order dated May 2022, the Court opined that the concept of “marriage” under the exception will also include associated activities and that music is intrinsic to these ceremonies. The written submission further substantiates this understanding and argues for a broader interpretation of the provision by the court, in line with the legislative intent and international best practices, and the fundamental right to privacy. With these submissions on record, chances were high that this case would have witnessed strong arguments from those in favor of wider rights for copyright owners and also from the ones asking for broader fair use interpretations. However, with the suit being withdrawn now, chances are that the latter of the above will have to live to fight the same fight another day, while the former can easily rely on the narrow interpretations and can still insist onphonographic_final_settlement_decision  licenses to play songs in weddings and other ceremonies.

Meanwhile, for the same reasons, though the court did take Prof Scaria’s submission on record, I am not sure whether or not it will have persuasive value in future cases. Regardless, it could be extremely helpful for parties in any future cases pertaining to Section 52(1)(za), especially considering that Prof. Scaria has made the report public for anyone to read/ use it.