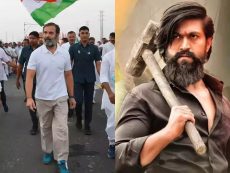 A Bangalore commercial court recently directed three tweets from the Twitter handle of the Indian National Congress (‘INC’) to be taken down. Additionally, it ordered twitter to temporarily block the handles @INCIndia and @BharatJodo until the next hearing. The order was passed ex-parte in a copyright infringement suit filed by MRT Music which holds the rights to the Hindi version of songs from the movie KGF 2. Based on a screenshot of the complaint available here, the infringement claim was made with respect to two videos posted by the INC on Twitter, available here and here. The videos, in brief, are promotional materials for the Bharat Jodo Yatra being undertaken by the INC with the music from KGF 2 being used in the background. In this piece, I shall examine three facets associated with the order: first, the validity of ex-parte proceedings, second, the strength of the infringement claim, and third, the validity of the blocking order. I shall argue that while it might be a valid infringement claim, the granting of an ex-parte injunction and the order to block the two handles is incorrect.

As noted earlier, the order passed by the Bangalore court was ex-parte, without the presence of any representation from the INC. When made aware of the order, the INC responded by noting that they “were neither made aware of nor present at court proceedings” and had not received a copy of the order. If the statements are true, it implies that the court proceedings were initiated by MRT Music without prior notice to the INC. Additionally, from the limited copy of the complaint available here, it also seems that MRT Music did not ask INC to take down the concerned videos from its social media handles before approaching the court. With this background, I shall now analyse the validity of the ex-parte proceedings.

As a general rule, as per Order XXXIX, Rule 3, of the Code of Civil Procedure, 1908, before granting a temporary injunction the court is required to give notice of the injunction application to the opposite party. As noted by the Supreme Court in Morgan Stanley Mutual Fund v. Kartick Das, “ex parte injunction could be granted only under exceptional circumstances”. The factors to be considered while determining the validity of an ex parte injunction plea include, inter alia, irreparable or serious mischief, acquiescence by the plaintiff, complaining by the plaintiff at the first notice of the alleged infringing act, good faith, greater injustice caused by the refusal of injunction, and general injunction principles of prima facie case, the balance of convenience, and irreparable injury. Moreover, as per Rule 3, the court is required to “record the reasons for its opinion that the object of granting the injunction would be defeated by delay” while granting an ex-parte injunction.

In the instant case, the two allegedly infringing videos had been uploaded by the INC for nearly four weeks before the plaintiff approached the court. Given the seriousness with which the plaintiff takes the protection of its copyrights and the significantly wide reach of a political party such as the INC, it appears difficult to believe that the plaintiff was unaware of the clips until it filed the suit. It also appears, as noted earlier, that the plaintiff did not complain to the INC before approaching the court. As far as irreparable mischief or great injustice is concerned, it is unclear how that factor is satisfied in this case considering that it is a run-of-the-mill copyright case securing the financial interests of the copyright owner. Any loss caused by the refusal of an ex-parte injunction can indeed be monetarily compensated at a later date.

Notably, it has been pointed out by some that the complainant is a member of the opposition party, the BJP, and that the same songs have also been used by the BJP in their promotion material but not contested by the complainant (for instance, see here, here, here, and here). This, in itself, however, does not imply a lack of good faith since a copyright owner does have the right to enforce their rights in whatever manner they choose. Nonetheless, as highlighted above, despite its popularity in the political discourse, it is an ordinary copyright infringement dispute with nothing exceptional about it. It is rather the quintessential case that arises in such circumstances.

While I do not have a copy of the order, from the limited coverage it also does not appear that the court expressly provided reasons why an ex-parte order was necessary. The court alludes to vague reasons of “irreparable injury” or discouraging piracy, without even paying lip service to the impact of “delay” and why it can’t wait until the next hearing. The only reference to ‘delay’, as reported here, was concerning the appointment of the commissioner. I hope that this is just a consequence of omission in the coverage, and the court actually addressed the issue, in which case it will be interesting to look at the reasons cited by the court. In any case, irrespective of the strength of the infringement claim, the ex-parte injunction may not end up standing scrutiny of ‘exceptional circumstances’ as required by the earlier mentioned SC case.

From the perspective of the infringement claim, this case is similar to a previous issue that I had discussed on the blog concerning the use of the popular song Enjoy Enjaami for political campaigning. The only difference between the two scenarios is that while the INC case involves the use of the background music and the song, the earlier issue involved the background music and the video, but not the song. This does not, however, have a substantial impact on the accompanying analysis apart from the change in the kind of work involved. Thus, in order to avoid repetitiveness, in this post I shall just summarise below the findings from my earlier post which readers can refer to for a more elaborate discussion.

In brief, the use of the song by the INC in its campaign videos would amount to infringement as it did not seek a licence from the plaintiff unless it is protected by any exception under Section 52 of the Copyright Act. The only possible exception is that under Section 52(1)(a)(ii) concerning fair dealing for the purposes of ‘criticism or review’. As the focus is on the current clips rather than the underlying work, it could be considered a ‘review’. However, there is a considerable possibility that the work is not considered fair dealing. This is because, despite the possibly transformative nature of the work and the negligible impact on the market of the work, the use of the underlying work in the INC clips is for a political, and arguably commercial purpose. Additionally, the underlying work is creative as opposed to factual, and clips use both quantitatively and qualitatively substantial parts of the underlying work.

Till this point, I have argued that irrespective of the fact that the plaintiff has a reasonably strong case of infringement, it did not merit an ex-parte injunction. The next element of the order that deserves attention is the relief granted by the court. The relief included not just taking down three tweets (I am not sure which the third one is as the complaint copy seems to suggest only two allegedly infringing tweets), but also blocking the handles @INCIndia and @BharatJodo on Twitter. While it can be contested even for the former (taking down of three tweets) that it might not satisfy the limb of irreparable injury and a temporary injunction might not be warranted, it is the latter aspect (blocking the handles) that I shall be discussing more substantively.

While Twitter itself has previously blocked handles for infringing its copyright policies, a court order to that end appears to be a new remedy. At least I have not come across a previous instance of an Indian court passing a similar direction, but would be happy to be corrected if the readers are aware of it. There remains a difference between the exercise of blocking powers by the two entities. Twitter’s blocking of any given handle is based on its own interpretation of its community guidelines, and its policies such as its treatment of a DMCA complaint. It has expansive de-platforming powers without any mandatory constraints in the exercise of this power. It can impose more restrictive interpretations of free speech than courts in a given jurisdiction are to govern by.

On the other hand, the Indian courts are constrained in their power to censor any form of content by the applicable legal system. Accordingly, given the importance of freedom of speech and expression, and its recognition as a fundamental right, courts are required to ensure that any restrictions on this right are narrowly tailored. This restraint is also applicable in cases involving copyright infringement. This is exemplified in a slightly similar issue that the courts need to address at times which is whether to block a specific infringing URL or to block the entire website on which the infringing content is uploaded (see here). Recognising the need for balancing free speech with intellectual property, the Delhi High Court in UTV Software Communication Ltd. v. 1337X.TO held that website blocking orders should only be passed when it is necessary and proportionate. Such orders, thus, are restricted to rogue websites which, inter alia, consist of predominantly infringing content.

Applying a similar approach to the issue of blocking specific tweets as against blocking the entire handle would require an assessment of the content posted by the concerned handle. The @INCIndia and @BharatJodo handles consist of 122.1k and 1228 tweets respectively at the time of typing. Out of such a large number of tweets, even as assessed by the court thus far, only a couple of them have been found infringing. This is a negligible quantity when compared to the total tweet count. Hence, it is far from correct to claim that the handles are engaged in predominantly infringing content. Rather, as the handles belong to the largest opposition party in the country it is even more important for their expression to be communicated to the public at large. In this instance, the harm caused by the blocking of the handles is much more than that caused by their continued existence. Therefore, the order to block the said handles appears to be incorrect in law.

The present decision is yet another example of the unruly horse that the mechanism for content blocking in India is. As has been discussed on multiple occasions on the blog (see a quick summary here), this stems from the ad hoc, vague approach taken by the courts in deciding these questions. In the instant case, the casual approach to blocking orders has scope for broader ramifications for the Indian democracy if a key channel of communication of the leading opposition party is blocked in a rather disproportionate way. Interestingly, neither the handles nor the concerned tweets have been taken down at the time of writing. It remains to be seen whether staff-shortened Twitter will resist enforcement of the order in line with its conflicting free speech beliefs under its new administration.

Edit: Soon after this post was published, it was reported that this order has been set aside by the High Court. Livelaw has the details here.