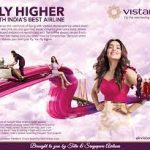 “Fly Higher” is descriptive in character and is commonly used by airlines and aviation-related educational institutions. (paragraph 24). It was not used as a trademark – meaning that Vistara did not use “Fly Higher” as a source identifier.

Frankfinn registered “Fly Higher” under the classes 16 and 41 (para 5). Vistara’s core services are in classes 12  and 39 (para 10(c)). The channels of trade and classes of customers are different. The Court found the element of confusion to be prima facie lacking in this case (“27. It is difficult to fathom that an informed decision to travel by Vistara airlines would be taken by a person intending to travel, keeping in mind the alleged popularity of the “Fly High” mark of the Plaintiff or the services pertaining to training in varied fields of travel, hospitality and hotel industry, including Aviation Sector. Plaintiff has not placed on record any material to establish that it has the necessary goodwill or reputation in the services offered by the Defendant.”). Thus the case did not satisfy the requirements of Section 29(1) and (2) given below.  (para 25, 26, 27).

This is a well-reasoned and well-written judgment going into the fundamentals of trademark law.

A mark, in order to obtain trademark protection, should attain secondary meaning i.e. it should attain distinctiveness (Section 2(zb)). It should have the innate ability to enable a consumer to connect the product or service with the source (known as the source-identifying function of trademark). Generally, descriptive marks fall in the lower end of the spectrum as far as potency of trademarks is concerned.

It does not appear that the mark or tag line “Fly Higher” enjoys an independent existence. In fact, I do not think that it enables a consumer to immediately connect “Fly Higher” with either Vistara or Frankfinn (or any entity for that matter). Vistara presented evidence suggesting that it is an industry practice to use “Fly Higher” (and variants of the same) by airlines and aviation-related education academies (para 29. 30, 31, 32). Since “Fly Higher” appears to be descriptive in character, the onus is upon Frankfinn to prove that it has attained distinctiveness. From a layman’s perspective, I don’t think that anybody can think of any service provider or manufacturer when she/he hears or sees “Fly Higher” (unless proven otherwise). If “Fly Higher” does not enjoy distinctiveness and is not a standalone mark protected under the trademark law, the question of infringement does not even arise.

More importantly, when classes are different, the issue of trademark infringement generally does not arise (unless the services are similar or allied). Vistara is an airline. And Frankfinn is into imparting aviation-related education. The target consumers are, as pointed out by the Court, altogether different.

I couldn’t get the order dated 21 January 2022 from the high court website. According to me, this was an erroneous order in the first place for the reasons discussed above. (In jurisdictions like Germany, preliminary injunctions are sometimes not enforced by the successful parties. It is because, in case of an adverse final order vacating the preliminary injunction, the losing party will have to reimburse all costs associated with the court action (including that of the costs incurred by the other party). For more, click here (page 144). That acts as a deterrent against misuse of legal proceedings.)

I understand that the 21 January order was an ex parte order.  However, the Supreme Court in Ramesh Chand Ardawatiya Vs. Anil Panjwani, (AIR 2003 SC 2508), pertinently held as follows:
“33. ………In the absence of denial of plaint averments the burden of proof on the plaintiff is not very heavy. A prima facie proof of the relevant facts constituting the cause of action would suffice and the court would grant the plaintiff such relief as to which he may in law be found entitled. In a case which has proceeded ex parte the court is not bound to frame issues under Order 14 and deliver the judgment on every issue as required by Order 20 Rule 5. Yet the trial court should scrutinize the available pleadings and documents, consider the evidence adduced, and would do well to frame the “points for determination” and proceed to construct the ex parte judgment dealing with the points at issue one by one. Merely because the defendant is absent the court shall not admit evidence the admissibility whereof is excluded by law nor permit its decision being influenced by irrelevant or inadmissible evidence.”

I do not expect the final judgment to be different. Vistara can take note of the Supreme Court judgment in Salem Bar Association case: “Judicial notice can be taken of the fact that many unscrupulous parties take advantage of the fact that either the costs are not awarded or nominal costs are awarded on the unsuccessful party. Unfortunately, it has become a practice to direct parties to bear their own costs. In large number of cases, such an order is passed despite Section 35(2) of the Code. Such a practice also encourages filing of frivolous suits. It also leads to the taking up of frivolous defences. Further wherever costs are awarded, ordinarily the same are not realistic and are nominal. When Section 35(2) provides for cost to follow the event, it is implicit that the costs have to be those which are reasonably incurred by a successful party except in those cases where the Court in its discretion may direct otherwise by recording reason therefor. The costs have to be actual reasonable costs including the cost of the time spent by the successful party, the transportation and lodging, if any, or any other incidental cost besides the payment of the court fee, lawyer’s fee, typing and other cost in relation to the litigation. It is for the High Courts to examine these aspects and wherever necessary make requisite rules, regulations or practice direction so as to provide appropriate guidelines for the subordinate courts to follow.”