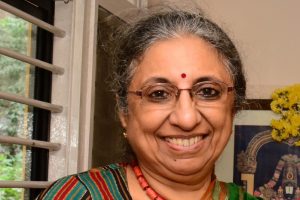 Justice (Retd.) Prabha Sridevan served as a judge of the Madras High Court from 2000 to 2010. Post retirement, she was appointed as the Chairperson of the IPAB (Intellectual Property Appellate Tribunal) from 2011 to 2013.

During her tenure as a High Court judge, Justice Sridevan dealt with a wide range of cases, including the celebrated Novartis Glivec case, where she ruled against Novartis, holding that India’s section 3(d) was a constitutionally valid statutory provision.

In her capacity as Chairperson of the IPAB, she delivered a number of important IP decisions including one relating to India’s very first (post TRIPS) compulsory licensing case. She also played a monumental role in improving the functioning of IPAB (documented here, here and here).

Over the years, she’s had numerous distinctions conferred on her, two of the most important of which are highlighted below:

2. She was awarded the Justice Shivaraj V. Patil Award for Service to Humanity.

3. In 2004, she was tasked by the government to head an IPR Think Tank to formulate India’s IPR policy.

She is also a prolific writer and public intellectual, and pens regular columns for both English and Tamil newspapers on a range of social, legal and political issues:

1. Some of her notable editorials have been documented on SpicyIP: here, here, here and here.

2. Her articles for the Tamil daily Dinamani were compiled and published in the form of a book titled “Karappan poochi nagaikkumo” (Will the Cockroach have the last laugh?) in 2015.

’, containing a compilation of her published articles and speeches was published and launched at an event hosted by CUSAT, Kochi.

5. She translated a number of short stories written by R. Chudamani from Tamil to English (some of which have been published in the book ‘Seeing in the Dark

An excellent public speaker, she’s been known to deliver punchy talks including one at the MIP India and Innovation Forum on the topic of “Life of P.I. (Public Interest)”.

A truly versatile personality, her recently found interest is line drawing and some of her artworks have been auctioned for the purpose of fundraising by two prominent NGOs: The Banyan and IDIA.