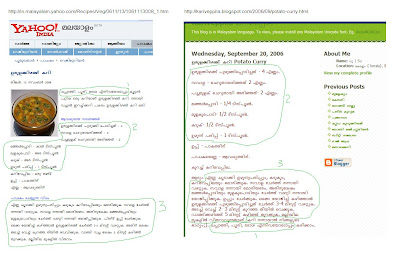 Yahoo! has been in the midst of a spicy controversy since it launched its Malayalam portal last month. A number of bloggers from Kerala, lead by Ms. Surya Gayathri attacked Yahoo for allegedly plagiarizing content from their blogs. Ms. Surya Gayathri, who had posted her recipe for Erunellika (Gooseberry pickle) on her blog (Kariveppilla – see image) was shocked to find her recipes copied verbatim on the Yahoo portal (For a translation of recipes on the Yahoo site and on Ms. Surya Gayathri’s site, click here).

Yahoo’s initial response constituted a shifting of blame to Webdunia.com, who, Yahoo claimed, provided the content “on the express representation that they are duly authorized by the author of the story to publish it.” The reactions to this response ranged from clearly outraged to downright humorous. (See for example the cartoons “Yahoo Subcontracts Plagiarism”). However, Yahoo did immediately remove the controversial content from its website. Webdunia, on the other hand, through the chief editor of Weblokam (a portal run by Webdunia) made an unconditional apology for what it claimed to be an “innocent and inadvertent” lapse.

After weeks of angry emails and calls in a variety of languages, and an official bloggers protest on March 5 (which was declared by the bloggers as the “Remove Plagiarism Day”, Yahoo has now come out with a more concrete “apology” (which is considered by some to not amount to a direct apology to Ms. Surya Gayathri) stating that “Yahoo respects the blogging community and the etiquette followed. We regret inconvenience caused by the inadvertent posting of the recipe without attribution. Our regional content provider webdunia should have checked out the legal right for the reproduction of the content. We see it as a serious matter and have removed the content from our site. We as a company respect the values of the blogger community.” (As Quoted in the Times of India article available here).

Going through the numerous comments made by interested and disinterested parties to this controversy, I started wondering about the underlying legal issues that could be raised if the matter were to go to court. The most obvious issue is whether a recipe is copyrightable. Sub issues (depending on the jurisdiction in which the case is brought) may include whether there is a minimum amount of originality or creativity that make the recipes copyrightable (the Fiest standard), whether a recipe can be considered an “expression” at all (see the very interesting article by Christopher J. Buccafusco titled “On the Legal Consequences of Sauces: Should Thomas Keller’s Recipes be per se Copyrightable?” published this year by the Cardozo Arts and Entertainment Law Journal (24 Cardozo Arts & Ent. L.J. 1121) and whether or not Yahoo can seek cover under the creative commons license – the license that allegedly covers many of the blogs and blog contents in issue (To view one version of the Creative Commons license – i.e. the Attribution 2.5 license click here.)

In the US, the relevant law relating to copyrightability of recipes is 17 USC § 102(a), § 102(b) (which excludes certain subject matter from copyright protection), US Copyright Office Fact Letter 122 (which excludes mere listings of ingredients as in recipes from copyright protection unless the same a accompanies by substantial literary expression) and 37 CFR §202.1. Recent US cases interpreting the above law have denied copyright protection to recipes per se (other than recipes in “cookbooks in which the authors lace their directions for producing dishes with musings about the spiritual nature of cooking or reminiscences they associate with the wafting odors of certain dishes in various stages of preparation.” – (See Publications Intl. v. Meredith Corp. 88 F.3d 473)

In India however, there is no law similar to the US law that prohibits copyright protection from being granted to recipes. In Govindan v Gopalakrishna (1955 – case relating to compilation) (quoted in Burlington – discussed below), it was held that even if the amount of originality in a compilation is very small, the same is protected by law and no one can appropriate the result of another’s brain, skill or labour even in such works. Arguably, if a small creative input in a compilation is copyrightable, a recipe, particularly original instructions in a recipe will certainly be copyrightable in India.

The more recent cases of Burlington and SCC Online, seem to be discordant as to the standard to be applied in determining copyrightability of a database. In Burlington, the court appeared to endorse a “sweat of the brow” type doctrine while in SCC, it followed the Fiest logic of minimum creativity (See comment). While a recipe is not, strictly speaking, a database, the “ingredients” portion of a recipe may be considered akin to a database in that it is a list of items. However, no matter which standard we apply, recipes will in all likelihood be found to be copyrightable in India. In Fiest, the court held: ”Facts, whether alone or as part of a compilation, are not original and therefore may not be copyrighted. A factual compilation is eligible for copyright if it features an original selection or arrangement of facts, but the copyright is limited to the particular selection or arrangement. In no event may copyrights extend to the facts themselves.”

A recipe, especially an original recipe, does “feature an original selection or arrangement of facts” and may therefore merit copyright protection even under the Feist rationale. There is certainly a more than just a minimum level of creativity involved in determining which items are to be used, and in what quantity. Indeed, there is a clearly high degree of creativity involved in determining which ingredients to mix with which and in which order, to get that perfect result! The description of the “method” also involves a great deal of creativity – a glance at the comments of users of the plethora of recipes available online clearly demonstrates that some recipes are easier to follow than others and give better results than others (for the same dish) simply because the method is explained in a lucid and precise manner.

Further, from the facts as they have unraveled during the course of this controversy, it is clear that what Yahoo did was what qualifies as a “slavish copying” that is a clear copyright violation.

Whether or not the recipes in questions are copyrightable under the relevant IP laws may well be a secondary issue in the present Yahoo! controversy. The primary issue here is one of corporate ethics. Even under the various creative commons licenses, which often cover the content within the blogs, while the copying of the content may be permissible (depending on the type of license), attribution of the source is mandated. A simple attribution of the various blogs from which the content was “plagiarized” may in fact have been adequate to avoid the entire controversy altogether!