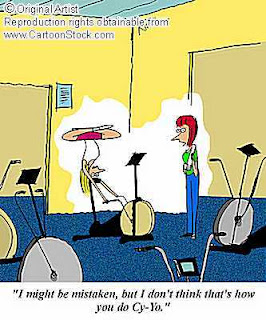 The recent spate of posts on the now-dormant-now-alive issue of Bikram Yoga and the copyright battle in the US, especially Shamnad’s piece on the Suketu Mehta op-ed brings a related though slightly tangential issue to mind. One that Shamnad once described as the “doctrinal confusion” issue – albeit in a different context.

I’ve seen this repeatedly in the Indian media. A tendency to confuse copyrights and patents and use both interchangeably. And it often does not stop there. It extends more often than not to the law itself and the alleged “simplification” of legalese by reporters, ostensibly to interpret legal jargon and make it comprehensible for the “lay person”. And the “lay person” who often than not either for lack of access to the relevant background material or for a preference for a bullet-point summary of world issues ends up forming crucial opinions on the basis of this distilled and often incorrect representation of a legal controversy by reporters.

And the result? More often than not, the real issue is lost sight of on account of this spate of irresponsible and trigger-happy reporting.

Consider the piece below from the 23rd May issue of the Delhi Times, a supplement that accompanies the Times of India.

I’ve reproduced the article as I thought it may be worth spending a little time looking at whats wrong with it.

Patenting Yoga: The issue steams up

He’s called the bad boy of yoga by some in the US media. Bikram Choudhury, who migrated to the US several years ago, ostensibly on the invitation of former US prez Richard Nixon, is definitely in the big league. The man claims to have taught yoga to several Hollywood celebrities. Now, Choudhury is in the news for having applied for a patent on his form of yoga. This entails doing yoga in a steam room which Choudhury calls, ‘Bikram’s torture chamber’. Earlier, in 2002, Bikram had successfully obtained copyright to his style of yoga – for 26 poses and two breathing exercises.

Despite protests by a group of teachers in 2002 that yoga is not anyone’s personal domain, in 2005, a US federal judge ruled that Bikram’s copyright was legitimate and enforceable. Judge Phyllis Hamilton’s ruling said that you can get a copyright on a “compilation of information that’s in the public domain, as long as it’s assembled in a sufficiently creative fashion.”

And, it is learnt that the US Patent and Trademark office has reportedly issued 150 yoga related copyrights, 134 trademarks on yoga accessories and 2,315 yoga trademarks.

Yoga experts and practitioners here are livid about this. Says Hari Singh Bhupesh who has been teaching yoga for the past three decades, “How can anyone even think of patenting yoga? It’s a big mistake, because a real yogi would like his yog to spread to as many people as possible.” Talking about Choudhury in particular, he says, “By patenting it, this man has made it clear that he’s interested only in money, not yoga. He’s got diverted from the real purpose of yoga, which works towards making you independent and still binding you with people.”

“Yoga helps you become physically, mentally, emotionally and spiritually strong. It creates prem bhava and works to bind humanity into a comprehensive whole. But people who are ‘selling’ yoga for money are going against the basic tenets of yoga” says yoga guru Surakshit Goswami. According to him, the yoga scripture Gherand Samhita mentions that there are 84 lakh asanas. “Has he created one in addition to these?” he asks adding that the Indian government must take up this matter with the US authorities.

Adds keen yoga practitioner and art expert Alka Pande, “Nobody can patent yoga. It’s a particular wisdom. Tell me, can you patent Indian classical music or meditation? You cannot. Likewise, yoga too reflects the collective wisdom of the country. You can’t take everything and anything into the domain of commerce.” Yoga, reiterates Alka, emerges from the Yoga Sutras that are the canons of knowledge. “You can interpret it in different ways and even devise your own method of doing it, but it will be from these Sutras only. So, how can you patent it?”

To Bikram’s claim of doing yoga in a high-temperature steam room, Bhupesh says, “He seems to be going against our scriptures that prefer yoga done in open, fresh air.”

And to America’s intervention on matters that are quintessentially Indian, popular yoga guru Baba Ramdev says, “America has no right to do this. The Indian government must intervene and get such patents cancelled.” And he warns those doing yoga in steam rooms, “This is extremely harmful. Yoga should be done in cool conditions, other wise you can end up with hypertension, heart problems, depression and problems related to the nervous system.” Adds former CBI chief Joginder Singh, “It’s stupid of America to even think of doing such things. No country should entertain requests for such patents, on matters they have no knowledge of.” — PURNIMA SHARMA

Firstly, it begins with the predictable pronouncement that Bikram Chaudhury is attempting to patent yoga and then goes on to contradict this by stating that the USPTO has issues 150 yoga related copyrights.

Thereafter, it seeks comments from people who clearly are not any more aware of the real issue than the reporter herself. So, while “Hari Singh Bhupesh” trashes Bikram Chaudhury for not being a real “yogi”, “Surakshit Goswami” demands to know if Chaudhury has created any “new asanas” that are not written about in “the yoga scripture Gherand Samhita (which) mentions that there are 84 lakh asanas”.

Perhaps no one explained the concept of copyrights in compilations to Surakshit Goswami.

“Keen yoga practitioner Alka Pande” announces that no one can patent yoga. She is absolutely right. But who is attempting to do so? Remind me again?

“Bhupesh” laments that yoga done in a steam room is “against our scriptures”…(And the intellectual property violation issue there is…?)

Indeed we hope that the collective wisdom that governs the legal advisory mechanism for the Indian Government is better informed on the issue or we stand to have a political gaffe larger than what Michael Moore ever dreamt of, on our hands.

On a more serious note, I am not on the merits of the issue. I am personally sceptical about the copyrightability of a series of yogic postures in a controlled environment, but my point today is different. All I am saying is that responsible reporting can go a long way in influencing, moulding and positively channelising public opinion, encouraging healthy debate and promoting greater activism in the world’s largest democratic society.

Yet what happens is far from it. Today nobody correctly understands the real issue. Yet nobody is willing to admit it. The result? We cry ourselves hoarse about scriptures and traditional knowledge when none of that has even been sought to be monopolised by the man in question.

I am reminded of a recent debate in Indian political circles over whether singing of Vande Mataram (also known as the ‘Morning Song of India’)in schools should be made mandatory. The ruling coalition (UPA) and Opposition members debated over the Government’s stance that singing the National Song Vande Mataram on September 7, 2006 to mark the 125th year celebration of its creation should be voluntary.

A television channel in a “sting operation” visited a number of ministers in their homes and offices (those who were spearheading the movement to make the singing mandatory) and simply asked them to sing the song. They faltered, they stared, they tried and all of them, with no exception, failed to sing the song. They knew neither the words, nor the tune! While the country laughed at the twenty seconds worth of discomfort of its leaders, the issue, predictably was buried forever.

This time round too, for all our blogging and academic analyses, Bikram Yoga and its copyrights, I fear, will remain intact and unchallenged, while the collective energy of our intelligentsia is spent, ahem, barking up the wrong tree!