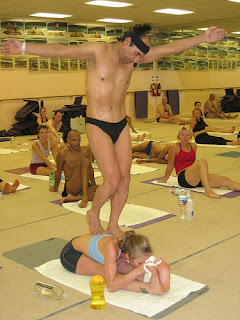 The controversy surrounding the Yoga guru, Bikram Choudhary and his copyrighting of “hot” yoga poses (perhaps a better term ought to be “sauna yoga”) has reared its ugly head yet again. Talk about ‘stretching” IP!!.
Oh well—if a patent can issue on a method of exercising a cat by making it chase a laser beam, what’s wrong with copyrighting a more holistic exercise regimen that does not involve anything as fancy as lasers—and more importantly, one that pertains to human beings.

What’s funny (or rather “troubling”) is that, in all this media frenzy, the Indian press continues to conflate the terms “patents” and “copyrights”. Most news reports are shocked at the “patenting” of yoga asanas—when Bikram’s claim to fame (or rather, “in-fame”) is really in trying to “copyright” it. Anyway, what began this new found interest in the monopolization of yoga may be Suketu Mehta’s op-ed in the NY times, titled “A Big Stretch”—something that was commented on by Aysha in her excellent (and provocative) post on religion and IP.

Prof Bhaven Sampat, whom I’d blogged about earlier, in connection with the creation of a very useful database of Indian patent applications, responded to Suketu’s piece and sent a copy to the NY Times—unfortunately, for reasons best known to them, they didn’t publish.

Bhaven is spot on in his critique—but I also think he is way too kind. After reading Suketu’s highly “stretchable” notion of trading Gleevec for yogic nirvana (maybe a future India—Swiss FTA should have this!!), and his rather implicit preference for the monopolization of knowledge along caste lines, my advise to Suketu would be along the lines of what was tendered by a towering Indian intellectual, Ramchandra Guha to Booker winner, Arundhati Roy in response to her piece on the Narmada dam: Please stick to fiction!!

In fact, Suketu’s very first paragraph reveals a deep ignorance for how copyrights operate. He states:

“I grew up watching my father stand on his head every morning. He was doing sirsasana, a yoga pose that accounts for his youthful looks well into his 60s. Now he might have to pay a royalty to an American patent holder if he teaches the secrets of his good health to others.”

Suketu—notwithstanding Bikram’s abominable attempt at monopolizing an ancient Indian knowledge form, his dubious copyright over yoga poses does not in any way prevent your dad from standing on his head or of teaching this to others. Of course, if he does this in a “sauna” environment (105 F or 45 C) and follows the exact same sequence of 26 odd steps that Bikram claims to have distilled out of the ancient scriptures, he may be in a little bit of copyright trouble in the US.

I say “may be”—because even under the most liberal IP standards that the US has now come to represent, you could still run a claim that yoga sequences are not copyrightable, since they are predominantly “functional”. And if the US is serious about “precedents” and respecting the classic “idea expression” dichotomy laid down in Baker vs Selden, you’re likely to succeed. The Patry Copyright Blog, by William Patry, Senior Copyright Counsel, Google Inc, elucidates this point quite well and also cites to 2 law review articles on this theme.

Suketu is right to be concerned about this rampant commercialization/monopolization of a holistic health regimen that has been in the public domain for several centuries—but deploying his poetic (or literary) license to “stretch” logic is nothing short of disrespect to an intelligent public that will soon tire of excessive emotional rhetoric. Anyway, this is Prof Sampat’s critique:

The posturing in Suketu Mehta’s op-ed column on patenting yoga may have interfered with his quest for enlightenment. The author is correct that there has been a worldwide growth of patenting of knowledge and techniques that are not novel but rather have long been in the public domain. These include not only the yoga related patents identified by Mehta, but also, in the United States, patents on how to swing on a swing (U.S. Patent 6368227) and a crustless peanut butter and jelly sandwich (U.S. Patent 6004596).

However, none of these patents have had deleterious effects: the vast majority of patents are never enforced or litigated, and most are easy to invent around. Just as we can swing and make our lunches without fear of paying royalties, Mehta can continue practicing downward dog in peace. Mehta’s article does point to a more important and more general point: worldwide, patent offices lack the expertise, incentives, and resources to make determinations of whether an invention is really “new enough” to merit patent protection.

This can not only lead to the issuance of silly patents that don’t matter, like those discussed above, but also questionable patents on inventions that can have life-or-death consequences, like the cancer drug Mehta cites. But the implication of the article—that the problem in both cases is patenting per se—is misguided. Well—designed patent systems can simultaneously promote innovation and prevent encroachment on the public domain. (And patent-based regulation of knowledge is probably better for facilitating diffusion than the caste-based regulation of knowledge Mehta appears to favor.)

The salient concern is granting of low-quality patents: those that should not have been issued in light of what was already known. The solution is two-fold. First, policymakers worldwide need to think carefully about how high (or low) to set the bar for patentability. Second, they need to provide patent offices with better information about pre-existing knowledge and inventions, and the resources needed to evaluate this information.

The author is an assistant professor at the Mailman School of Public Health at Columbia University, and co-creator of a free searchable database of Indian patents and applications, india.bigpatents.org .