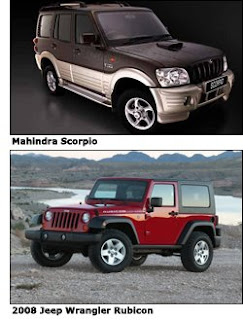 After their last IP dispute over the ‘Jeep’ trademark, Chrysler and Indian car major Mahindra & Mahindra have moved on to their next IP dispute over the design of Scorpio’s front grill. Chrysler has alleged that the Mahindra & Mahindra has ripped off one of its designs for the front grill. Its not clear as to whether or not Chrysler had actually protected its design under the Indian Designs Act. Regardless Chrysler could still sue for copyright infringement. Media reports however suggest that there is hardly any chance of the dispute being dragged to the courts since both parties seems to be intent on resolving the issue out of court.
One commentator however notes and very rightly that
Even if Chrysler does not wish to seek serious remedies against M&M, it may still have to defend its trademark and copyright because of the potential implications the failure to do so could have for future clones. Because of the global nature of today’s car market, actions taken or not taken in one nation can affect legal rights in another. Failure to prosecute a known infringement could amount to a waiver of rights to protest other infringements of the design or its elements in some countries. That could lead to a nightmare scenario of third-party companies creating unlicensed conversions, body kits and other products that could seriously impact the company’s image and bottom line. Click here for IPKat’s take on the issue.