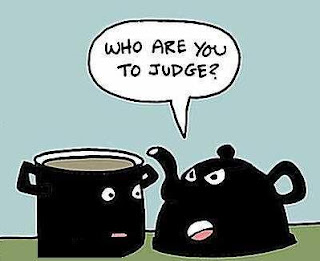 Talk about getting paid back in one’s own coin! Be it the annual human rights report card or the IP progress report (the USTR Special 301 report), the US of A finally seems to have met its match and this time it’s someone its own size, literally and figuratively- China. It looks like Pax Americana is truly at an all time low (what’s the word for it? Ah yes- rock bottom).

According to a post on the International Economic Law and Policy Blog, a Chinese official, Mr. Wang Ni Ni, who purportedly is the director general for the “China WTO/TBT National Notification & Enquiry Center” in Beijing, has sent a letter to a state senator from Vermont. Senator Virginia Lyons of Chittenden County, chairperson of the Natural Resources and Energy Committee, received the letter from the Chinese official who raised objections to Ms.Lyons’ bill that seeks to impose fees on manufacturers of electronic goods sold in Vermont, based on the weight of the item. The fee collected is meant to be spent on recycling of e-waste (an extension of the polluter pays principle?).

This scheme, according to Ms.Lyons, could prove to be effective in reducing the volume of electronic waste in Vermont landfills. However, she expressed her outrage saying that the letter flew “in the face of state sovereignty and democratic principles“. She further added that:
“It’s simply not OK for other governments, foreign national governments, to feel they have a right to intervene in our state legislative process in the way China has”
The Forum on Democracy and Trade, a network of US public officials from State and Federal governments has issued a statement in this regard and believes that China’s allegations are too vague “without much factual or legal explanation”. Specifically addressing the objections of China, the forum feels that the proposed Vermont legislation, on one hand could fall under the definition of “technical regulation” as defined by the TBT for it lays down product characteristics and on the other, since the primary objective of the bill is recycling of e-waste, it may not strictly be a “technical regulation”. However, all the parties involved are treating it as one.
It has gone on to state that Chinese manufacturers may not fall within the definition of “manufacturers” as defined by the Vermont bill, though in the natural course of things, any additional financial burden on the US distributors could indirectly affect manufacturers in dragonland.

Without taking sides (lest I be accused of taking vicarious pleasure in the perceived violation of US sovereignty), I would like to understand the facts better before passing a comment.

First things first, (as many articulate and better-informed readers would know) an agreement called the Agreement on Technical Barriers to Trade, negotiated in the Uruguay Round, was entered into by WTO members. As the title explains, this agreement deals with the kind of technical barriers to trade that may be legitimately imposed by both the Central government (Article 2) and Local governments of provinces (Article 3) of a member on the products imported within its territory, transparency provisions of such barriers, dispute resolution mechanism etc.
What constitutes a legitimate technical barrier has been listed in Article 2, though not in an exhaustive manner. According to Article 2 (which is applicable to local governments under article 3 as well), legitimate objectives include protection of human health or safety, animal or plant life or health, or the environment. To this extent, Ms.Lyons’ scheme is justified in its objective.
What about the solution proposed to achieve this objective? Does the Agreement have provisions to guide such solutions? Paras 2.3- 2.9 of Article 2 deal with standards for such technical barriers. The gist of these paras is that in cases where international standards already exist on such technical specifications, or if they are on the verge of being adopted, members shall either adopt them or atleast relevant portions of the same. This is to ensure that the regulation is implemented in the “least trade restrictive way” possible and to achieve harmonization in international standards.

This leads us to ask if there exist international standards on recycling of e-waste. ISO 9001:2001 and ISO 14001 cover electronic recycling plants; then there’s Waste Electrical Electronic Equipment (WEEE) Directive of the EU. Interestingly, para 2.7 of the TBT Agreement states thus:

“Members shall give positive consideration to accepting as equivalent technical regulations of other Members, even if these regulations differ from their own, provided they are satisfied that these regulations adequately fulfil the objectives of their own regulations.”
One is not sure if these regulations have been considered; the most important fact to be noted here is that most of these standards are customised for certain categories of electrical and electronic equipments pointing to the fact that there is no single standard possible for all classes of electronics, though the end objective is the same- cleaner and safer environment free of e-waste. This means a gross standard for all kinds of electronic goods cannot be applied. More importantly, para 2.8 of the Agreement unequivocally states thus:
“Wherever appropriate, Members shall specify technical regulations based on product requirements in terms of performance rather than design or descriptive characteristics.”
Here’s where Ms.Lyons’ scheme fails to comply with the Agreement for, as far as my knowledge goes, no reasonable, intelligible and satisfactory justification has been given for choosing “weight of the good” as the criterion for fixing the fee. This violates para 2.5 of Article 2 which states thus:
“A Member preparing, adopting or applying a technical regulation which may have a significant effect on trade of other Members shall, upon the request of another Member, explain the justification for that technical regulation in terms of the provisions of paragraphs 2 to 4.”
Evidently, Ms.Lyons hasn’t thought this through; however, in her defense she can probably say that the objections were not forwarded through the federal channel since para 3.3 of Article 3 states that members may require “contact with other Members, including the notifications, provision of information, comments and discussions referred to in paragraphs 9 and 10 of Article 2, to take place through the central government.”
The Chinese centre/center in question is officially called WTO/TBT National Notification Authority & Enquiry Point of People’s Republic of China. The Technical Barriers to Trade (TBT) Notification authority is required to be set up by every WTO member in accordance with Article 10 of the TBT Agreement, which authority is capable of answering all reasonable enquiries from other Members and interested parties in other Members; this, in addition to providing relevant documents regarding technical regulations, standards, conformity assessment procedures etc adopted within its territory. So the Chinese official should probably have contacted his US counterpart through the federal route (the USTR) instead of shooting off a letter to Ms.Lyons. The irony in this case is that Ms.Lyons believes that it was the US federal government that notified the WTO of this legislation and its purported violation of international trade law.

Notwithstanding all this, many among us feel that this is a case of selective amnesia, rather selective cognition on the part of the US. Instances of US interference both in WTO/TRIPS-related and other mainstream political issues aren’t rare (in fact, they abound; the Mulford episode for instance); so though legally correct, it would be better if one is spared that tone of sanctimony and righteous outrage (“Raudram” is the word which describes righteous outrage better) with which Ms.Lyons conveys her views. What goes around comes around…..