As readers would know, the TRIPS Waiver proposal at the WTO regarding Covid vaccines and treatment, has been discussed ad-nauseum for more than a year now, with very little actual progress. Roshan John brings us an interesting update from a closed-door discussion between EU, India, South Africa and the United States, based on some leaked text that appears to be a draft document outlining a potential compromise / way forward. Roshan is a lawyer and works on trade and intellectual property-related issues in medicine and has previously written for us here. You can view SpicyIP’s previous posts on the TRIPS Waiver here. 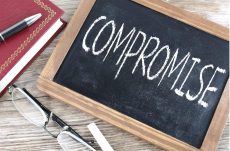 Image by Nick Youngson from here.

Wealthy nations like the European Union (EU), the United Kingdom (UK), and Switzerland have been opposing and stalling the landmark TRIPS waiver for over a year now. The details of the initial proposal made by India and South Africa are available in the MSF briefing document here. To break the stalemate, the EU, India, South Africa and the United States (quadrilateral discussion group) are working on a possible compromise in close door discussions, which will be presented to other WTO members, possibly this week for deliberation. Stat News has put out a ‘leaked text’ which gives insight into the proposed solution of the potential compromise.

The proposed solution is limited only to addressing patent barriers on COVID-19 vaccines. The proposed solution does not include other COVID-19 medical tools like therapeutics and diagnostics. Any outcome on COVID-19 should also apply to diagnostics and therapeutics, as these are essential aspects of containment and mitigation of COVID-19. The member states will decide on the proposal’s extension to therapeutics and diagnostics within six months. However, there is no guarantee that WTO will decide in 6 months.

The limited scope of the proposed solution will significantly impact COVID-19 treatments like baricitinib, which is not accessible in many countries due to patent barriers and geographical exclusions in voluntary licenses signed by the patent holder Eli Lily. Baricitinib is widely patented in more than 50 countries blocking access to generic versions of the drugs until 2029 when the patents expire. Generic versions of baricitinib can be made available for under US$7 per 14-day treatment course from India, which is significantly less than Eli Lilly’s prohibitive price of $1,109 per 14-day treatment course in the US.

MSF analysis shows that Latin America will have a significant impact of these barriers, and access to the new treatment will be limited due partly to patent barriers and restrictive licensing deals controlled by pharmaceutical corporations.

The eligible members under the proposed text ( i.e. both exporters and importers), who can use the proposed solution are only limited to developing country members that have not exported more than 10% of global exports of the COVID-19 vaccines in 2021.

The WTO does not define “developed” and “developing” countries. The Member States announce for themselves whether they are “developed” or “developing” However, other members can challenge the decision of a member to make use of provisions available to developing countries.

Due to the vague definition of a developing country, countries like Brazil with significant manufacturing and supply capacity could be excluded from being an eligible member because it decided to give up its ‘developing country’ status in 2019. The absence of a list of developing countries or developed countries at the WTO makes it challenging to figure out which countries are eligible.

Furthermore, according to the proposed text, China will be the only developing country based on the export threshold to be excluded as an eligible member. China has more than a 30% share of world exports of COVID-19 vaccine. India’s share of world export stands at 2.4% and will be included.

Regarding Least Developed Countries (LDCs), an issue that requires further clarity is the deliberate exclusion of LDCs from using the proposed solution. Under the TRIPS agreement, developing countries and LDCs are treated differently. WTO recognises and gives a list of LDCs. It is difficult at this point, without any clarification, to conclude that developing countries are referred to in the leaked text will also include LDCs.

This eligibility criteria based on ambiguous definitions and threshold of global export share is arbitrary and blocks potential critical avenues to increase access to COVID-19 medical tools for low- and middle-income countries.

Only limited to patents

The proposed solution is only limited to patents as it clarifies circumstances where steps are taken to use patented technology without the patent holder’s authorisation. Further, there is no clarity whether the patented subject matter shall include all granted, pending and any future patents that are filed.

Non-patent legal barriers, including barriers to accessing confidential information (such as dossiers submitted to regulatory authorities) and trade secrets, are not addressed in the proposed solution. The leaked text limits clarification regarding Article 39 of the TRIPS Agreement to only its clause (3) to “any authorisation issued as per this Decision” [i.e., a license issued as per the proposed solution]. This clarification regarding Article 39.3 will at best allow regulators to rely on patent holder’s data for follow-on regulatory approval, which is already a current TRIPS flexibility. The proposed solution does not address the issue of data exclusivity as a barrier when patent barriers do not exist. Further, barriers that are caused by confidential information and trade secrets as mentioned under clauses (1) and (2) of Article 39 are not addressed.

The United States has been pushing developing countries like India to have a standalone trade secret regime. The issue of trade secrets is also intrinsically linked to the broader arguments for the need for technology transfer to develop COVID-19 medical tools. However, the 2021 USTR report has criticised countries requiring or pressuring technology transfer from US companies. (Adyasha and Nikhil have analysed these issues here) In this context, the leaked text, of which the US was a part, not addressing the issue of trade secrets is not surprising.

The clarifications: Is it really a waiver?

The current compulsory licensing rules under the TRIPS Agreement were not designed to address some key challenges arising in a global pandemic. Some provisions also contain limiting factors in the context of a pandemic or an emergency in general.

The proposed solution has clarified that member states may authorize the use of patented subject matter under Article 31 without the right holder’s consent through any instrument available in the law of the member state. The leaked text clarifies the ‘law of members’ to include executive orders, emergency decrees, government use authorizations, and judicial or administrative orders. This clarification could be further utilized for compulsory licensing reforms in India to allow compulsory licenses through court orders/intervention. Courts can play a critical role and compel governments to issue a compulsory license when required. Rahul and Praharsh have written on a case before the Bombay High Court seeking a compulsory license on two new TB drugs, bedaquiline and delamanid. India has not granted a compulsory license since 2012—a situation that could be partly attributed to pressure from the US trade lobby groups.

Article 31(a) of the TRIPS Agreement requires authorisation on a product-by-product basis, which was one of the shortcomings of the existing mechanisms. The proposed solution retains the product-by-product approach, which is not an adequate measure to tackle pandemic challenges.

The clarifications offered in the proposed solution to Article 31(a) is a TRIPS-plus requirement. The clarifications now require identifying and listing all covered patents, which is an additional obligation and currently not a requirement under TRIPS. An alternate producer will not benefit from the proposed solution unless the government authorisation lists all patents covered, which may be difficult considering the lack of transparency and visibility around patent landscapes. A waiver on Article 31(a) itself will be helpful to some extent.

Member states are still required to notify the TRIPS Council, and the existing clauses on re-exportation (anti-diversion clause) are retained. The notification to the TRIPS council requires details of the authorised entity, the products, quantities, list of countries to be exported. These requirements are not currently part of the current Article 31 and do not do much to overcome the cumbersome processes under Article 31bis.

The proposed solution is an old wine in a new bottle. The already existing mechanisms under the TRIPS agreement and those presented as an alternative text by the EU over the last year are offered again as though they were new. The proposed solution does not deliver on the essence of the initial TRIPS waiver proposals and adds further conditions to utilise the flexibility under Article 31. The proposed solution falls short of a meaningful waiver