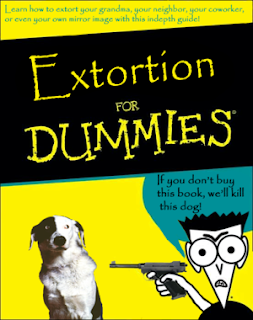 In a first of its kind for SpicyIP, we bring you a “ghost-post”, a term that we use to refer to a post by someone who wishes to remain anonymous.

Interestingly, I met this certain someone (“X”) during my years in active IP practice. We had raided a small firm accused of software piracy and X was the defendant’s counsel. It was perhaps one of the last software piracy raids that I ever did–as it left a bad taste in my mouth and I figured that aggressive IP enforcement against small traders was often inequitable and really not my cup of tea. Part of the reason was also a heart to heart discussion I had with X during the course of that case. X strongly castigated me for representing a team that used highly extortionist tactics for getting their way against small defendants.

I met X again recently and we resurrected our old discussion on the inequity of IP raids. I asked him to write a piece on this for us, given his vast experience with these sort of cases. And here is what he has penned: very heartfelt, and yet very persuasive.

You are working in your office one day, when all of a sudden, a group of people arrive unannounced brandishing a court order. The order allows them to walk into your office and conduct an audit of all your office computers to collect evidence of the use of unlicensed software in your office.

This group consists of a court-appointed commissioner, lawyers representing the plaintiff, and technical persons who will carry out the actual software audit.

Knowing that to disobey the order will amount to a contempt of court, you allow the group to carry out the audit.

The audit lasts several hours and continues well into the night. Needless to say, it is physically and emotionally draining on you as your work has come to a stand-still. Everyone around you knows there is some court proceeding going on. You have already lost face with your employees, and possibly even clients who have visited your office during the audit.

As you have several dozen computers purchased over a period of time, and the audit is conducted unannounced, you may not have the time to gather documentation and invoices demonstrating the purchase of licensed software.

While the court order allows you to back up your valuable client and business data, the plaintiff’s lawyers don’t allow you to do so, stating that documents/ data found on machines that contain any unlicensed software may not be backed up.

As everything is happening so fast and your whole world has been turned upside down, you do not have the time, presence of mind or legal representation to argue that (a) the court order does not make any such distinction; (b) such data may have been created on licensed software or (c) that such a backup of DATA does not infringe the copyright of the software company in its PROGRAMS.

All computers found with copies of what the plaintiff’s lawyers are calling unlicensed software are seized and sealed. You do not have the time, presence of mind or legal representation to argue that such copies may be backup copies allowed under the law, or that therefore several, or all of the seized machines are not liable to be seized, or that such copies are actually allowed under the software license.

The plaintiff’s lawyers conveniently do not inform you that the law allows back-up copies to be maintained or what constitutes a back-up copy permissible under law.

Even more importantly, your licensed servers are seized because they are found to contain back-up copies of software, allowed under the law, but deemed infringing by the plaintiff’s lawyers.

At the end of the audit, you are informed that your computers contain copies of unlicensed software to varying degrees. You are made to sign a report prepared by the commissioner, along with sheets that represent the software audit of each computer in your office.

Most of your computers and servers are seized and sealed. You are told that you cannot touch them till the court allows you to. You are not even allowed to separate the hard drives of those machines that contain the alleged unlicensed software, for the purpose of seizure, so as to enable you to continue using the rest of the machine, even though the court order clearly states that only storage media containing the unlicensed software is to be seized.

Again, you do not have the wherewithal to argue that the scope of the order has been exceeded.
The group leave your office in complete disarray, but not before the plaintiff’s lawyers tell you to meet them at their hotel later that night to discuss “settlement”, and vague references to press publicity.

You suddenly realise that you do not have access to any of your data and cannot service your clients.

You promptly rush over to the hotel in an attempt to save your business, reputation and sanity and make this go away at any cost.

The plaintiff’s lawyers play good-cop bad-cop. But they tell you that it is in the best interest of your business and reputation to settle immediately. There are threats about going to the press, about shutting your business down forever of you don’t play ball. They provide you with an exorbitant settlement figure that will effectively bankrupt you.

You beg and plead that you cannot afford the figure, that there are defences and mitigating circumstances, that maybe some software was installed in an unauthorised manner by employees and that you did not know, that you certainly do not need all that software for your business and therefore why must you be forced to purchase it; that you undertake that you will not use that software, and even if you do, in future, you will buy licenses, or that you will make use of open-source free alternatives (that last bit doesn’t go down too well).

You find yourself agreeing to all this even before you have seen the allegations made against you in the lawsuit. You agree to settle even before you know the merits of your case.

You cannot be concerned about whether you in turn have a right to sue the plaintiff for wrongfully seizing your machines or overreaching the orders of the court.

You cannot be concerned with the fact that the court issuing the order to have you raided, did not have jurisdiction to do so in the first place, and that therefore the order itself is bad in law.

You don’t have the time to be concerned about all these nuances!

Even if these points are brought to your attention by your lawyer, you are keenly aware of the delays that are endemic to the legal system.

You are also keenly aware of the fact that the plaintiff will try and delay the hearing of the matter as much as possible to cripple your business to gain an forceful hand in the settlement negotiation.

The plaintiff also delays entering into a mutually agreeable settlement with you, knowing that you are in an extremely weak bargaining position (considering your office is virtually shut down), and that you won’t have any choice but to meet its exorbitant demands.

To top it off, the plaintiff’s PR agency puts out an article in the leading newspapers stating that your company was raided and found to be running on unlicensed software, thereby ruining your reputation beyond all measure.

Fighting on the merits would invite further unwanted media attention, not to mention a delay in the resumption of your business.

You are genuinely unable to meet the plaintiff’s monetary demands but execute a wholly one-sided settlement agreement anyway as you are left with no choice.

The suit papers arrive a few days later and you finally know what the lawsuit against you was all about.

More importantly, you realize that if the cards weren’t all stacked against you, you may have had a chance to successfully defend yourself.

It is too late, as you now have a court decree against you.

Does it not strike anyone that even if the court had jurisdiction, certain safeguards must be incorporated in order to allow for the backup of data, and other methods so that the business of the defendant is not brought to a standstill.

Must the court not appoint independent technical experts to conduct such commissions ?

Must not the court provide the commissioner with some amount of discretion in the execution of the commission, for instance, to allow the use of computers after taking an undertaking from that the unlicensed software on such computers will not be used ?

After all, the purpose of executing a commission is to collect evidence, not stop a business. What purpose is served by not allowing a defendant to back up data, or be denied the use of an entire computer, when it is really only the hard disk that matters ?