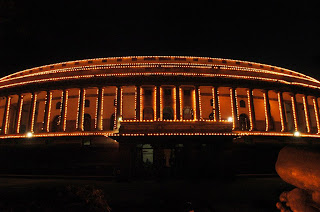 Subsequent to Shamnad’s post on shortened Parliament session and IP Bills I briefly browsed through Parliament to compile a list of legislations and rules, impacting innovation and intellectual property in India, which were scheduled to be debated by Parliament this session. The list can be found on the Parliament website over here. These laws are as follows:
(i) The Commercial Division of High Courts Bill, 2009 – This Bill proposes the creation of original jurisdiction amongst all High Courts in the country for high value commercial litigation. This includes high value trademark, patent and copyright matter. The Bill also amends the procedure for such suits. The Bill has already been passed by Lok Sabha. The Bill was subsequently referred to a Select Committee of the Rajya Sabha. The CPI(M) etc. have vehemently opposed the Bill. Our previous post on the topic can be accessed over here. It was scheduled to be debated and voted on by the Rajya Sabha in this session.

(ii) The Seeds Bill, 2004 – This Bill aims to create a mechanism to regulate the import, export, production and supply of seeds. PRS has some excellent material on this Bill which went through some important modifications after the Standing Committee Report. There have been concerns that the Bill overlaps with the Protection of Plant Varieties and Farmers’ Rights Act, 2001 (PPVFR Act). Either way the Bill, as is the case with any Bill aiming to regulate the seed market, can be expected to have a substantial impact on the innovation culture amongst farmers and plant breeders. This Bill was scheduled to be debated and voted on by the Rajya Sabha in this session.

(iii) The Pesticides Management Bill, 2008 – This Bill aims to regulate the distribution of pesticides and in the process also creates a data exclusivity regime for pesticides. We’ve blogged about it over here. It was scheduled to be debated and voted on by the Rajya Sabha in this session.

(iv) The Copyright (Amendment) Bill, 2010 – This Bill which was scheduled to be passed this session is most certainly not going through in the present session. Maybe in the monsoon session.

(v) The Academy of Scientific and Innovative Research Bill, 2010: The Bill which was introduced last year was examined by a Standing Committee of Parliament. The Bill’s title is self-explanatory. It was scheduled to be debated and voted on by the Rajya Sabha in this session.

(vi) The Biotechnology Regulatory Authority of India Bill, 2011: This Bill is one of the most crucial Bills for the bio-tech industries as it seeks to create an authority to regulate the biotech sector. So far the biotech sector is regulated by a web of informal committees. We’ve blogged about it over here. The Bill will be crucial in creating public confidence in genetically modified foods and the future innovation in this sector depends on this Bill. The Bill was scheduled to be introduced in the Rajya Sabha this session.