The Bombay High Court recently delivered an interesting judgment pertaining to passing off / trademark law. The dispute was over the shape adopted by the defendant for its Vodka bottle.
Gorbatschow Wodka Kg v. John Distilleries Limited 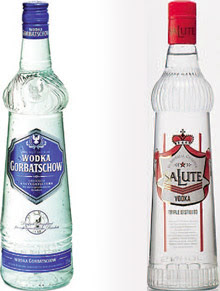 The plaintiff which owned one of the top fifteen premium Vodka brands in the world – “Gorbatschow Wodka”, marketed it in a bottle which was quite distinctive in shape. The shape was registered in various jurisdictions. In India, claiming use since December, 1999, the plaintiff applied for registration in January 2008 under Class 33 of the Trade Marks Act, 1999. The application is still pending.
The defendant was set to launch its Vodka under the trademark “Salute”. According to plaintiff, the shape of the bottle of the defendant was deceptively similar to that of plaintiff. The Court initially granted (ex-parte) ad interim relief subjected to the condition that defendants could market and sell its goods under the trademark “Salute” in a bottle of different shape and packaging. In the instant judgment, the Court considered the merit of  rival submissions of the defendant.
Arguments of defendant
The defendant contended that its bottles of Vodka – coupled with a distinctive trademark “Salute” and a differently coloured, distinctive label, could not be confused by the general public with the bottles of the plaintiff. The product of the plaintiff was a premium Indian Manufactured Foreign Liquor (IMFL) sold at a price band of Rs.650/ to Rs.750/ per 750 ml bottle. The target consumer was, according to the defendant, highly educated, rich and discerning. It was unlike a situation where a product would be purchased by a consumer of average intelligence and imperfect recollection. Therefore, the test of passing off had to be differentially applied. The design of defendant which was registered in 2008 under the Designs Act, 2000, was granted after an extensive search for similar designs. As the registration of the design was prior to the first use of the plaintiff in India, the duty casted upon the defendant to make a reasonable enquiry was duly discharged. Further, relying inter alia on non-registration of goodwill, defendant argued that the goodwill of the plaintiff could not be ascertained at the interlocutory stage.

The plaintiff asserted that the shape of its Vodka bottles was distinctive and formed an intrinsic part of its goodwill and reputation. It was contended that the conduct of the defendant would result in dilution of a) distinctive shape of plaintiff’s vodka bottles and b) goodwill and reputation in relation to the distinctive shape of the bottle and therefore, constituted passing off. If the defendant succeeded in launching the product, it would confuse the consumers. Further, registration under the Designs Act, 2000 was not a defence to an action for passing off. Therefore, the plaintiff sought for an injunction restraining the defendant from using the objectionable bottle and / or any other shape identical / deceptively similar to the plaintiff’s mark.
Judgment
The Court held that the plaintiff prima facie established its trans border reputation as well as reputation in Indian market. The Court noted that the plaintiff adopted the instant shape capriciously, purely to give the article a distinctive appearance. It did not have a functional character. The shape of plaintiff’s bottle was based on the architecture of Russian Orthodox Church – a bulbous structure. The shape of defendant’s bottle relied primarily on the same bulbous structure. The defendant could not give a bona fide explanation for adopting the impugned shape for its bottle.
If the defendant was allowed to dilute the distinctivenss and exclusivity of the mark of the plaintiff, it would embolden other infringers to invade upon the proprietary right of the plaintiff. The Court categorically blunted the argument of the defendant that the consumers of Vodka being affluent and educated, were less likely to be deceived. The Court drew the fallacy of the assumption underlying that argument viz., while those who were educated or affluent had the ability to discern, consumers who did not belong to the aforesaid category were more likely to be deceived. Stretched to its logical conclusion, the submission of the defendant would lead to a situation where the remedy of passing off would become available only in respect of goods which the average consumer purchased for the daily necessities of life. If that argument was accepted, that would render the remedy of passing off illusory. The class of purchasers was undoubtedly a relevant consideration. But all other relevant circumstances should also be weighed. Further, even if one proceeded on the argument of the defendant, it per se did not disposit the issue of whether the conduct of the defendant amounted to passing off or not. Further, the fact that defendant had obtained registration under the Designs Act, 2000 did not impinge the right of plaintiff to move an action for passing off.
For the reasons above, it was held that the plaintiff made out a strong prima facie case for the grant of  injunction. The balance of convenience weighed in favour of the plaintiff which had an established reputation. If the defendant was allowed to launch its product, it would cause irreparable injury to the established goodwill and reputation of the plaintiff. Accepting the arguments of the plaintiff, the Court restrained the defendant from using the objectionable bottle and / or any other shape identical / deceptively similar to the plaintiff’s mark in relation to its products/business in any manner whatsoever.
Note : The judgment discussed various case laws which recognised the significance of shape of package / carton / container in trademarks / passing off [ paragraphs 19 – 24 ].
For our earlier post on shape and trademark law, see here.