In a decision that is bound to have an impact on the creative faculties of Indian music composers, Justice Manmohan Singh of the Delhi High Court on the 21st of September, 2011 acting on a copyright infringement claim, filed by Canadian singer Loreena McKennitt, has passed an ex-parte interim injunction against Deepak Dev, an awarding-winning music composer from Kerala; and the producers & distributors of the Malyalam movie ‘Urmi’. The order however is restricted to the proposed release of the movie and the impugned song in the Tamil, Telugu, Hindi and English languages. The Court has not included in the terms of the injunction, the music which has already been released in the Malyalam version i.e. ‘Urmi’. 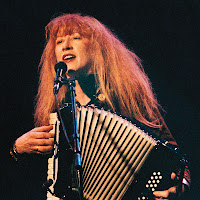 Loreena McKennitt, (pictured on left, image from here) a Canadian singer, famous for her Celtic music has claimed that Dev’s composition – ‘Aaro Nee Aaro’ – in the hit Malyalam movie ‘Urumi’, has been directly lifted from two of her own compositions by the name ‘Caravanserai’ and ‘The Mummers’ Dance’. McKennitt appears to have an extremely strong prima facie case in her favour. All three songs are available on Youtube, over here, here and here. In fact if you have a look at the comments on this video and this video you can see some pretty scathing remarks against Deepak Dev by some of his fans who appear to be terribly disappointed with this promising young music composer. Sample some of these comments:
(i) @piper42 thanks﻿ bro for pointing this out.i was turning to be a fan of deepak dev…not any more and;
(ii) @manimanijacobjacob: I used to think of Deepak Dev in a respectable manner. But NOT ANY MORE. Do you think we malayalees are fools ? Do you think by advertising statements like “already been stated in various interviews”, you can get away with it ? Sorry. I have NEVER ever seen nor heard a mention of Loreena McKennitt anywhere during the promotions, nor interviews, not just by Dev, but also it﻿ has never been mentioned by the producer of the movie, Prithviraj. Its straight STEALING, admit it.

Apart from suing Dev (pictured right, image from here) for copyright infringement of her melodies, McKennitt is also suing for violation of her ‘moral rights’ or ‘special rights’ under Section 57 of the Copyright Act, 1957 which not only give her a right to attribution but also a right to protect her work against mutilation or distortion or synchronisation with particular visual images. If you see the picturization of the impugned song ‘Aaro Nee Aaro’, you’ll notice that it is slightly on the sensual side (depending on your idea of sensuality), while McKennitt’s original numbers are set to more sobering lyrics.
On the lighter side, just to give you a simple analogy of the importance of moral rights and visual synchronisation: imagine somebody taking Kolaveri Di and syncing it with visuals of Mallika Sherawat gyrating to the original tune of Jalebi Bhai and just imagine how offended the composers of Kolaveri D would feel! Seriously though, music can be intensely personal to every composer and to take a melody out of context can and should attract the force of the law.
This particular decision of the Delhi High Court is particularly welcome because for much too long Indian composers, especially the biggies, have been blatantly ripping off foreign melodies, without paying a dime or even attributing the same to the original composers. Save for a few exceptions, like when Karan Johar bought the rights to the ‘Pretty Woman’ song, for his movie ‘Kal Ho Na Ho’ the rest of the flock have rarely ever drawn the line between inspiration and plagiarism. In fact the situation is so bad in Bollywood that earlier this year Anu Malik had claimed that Pritam’s super-hit number ‘Character Dheela’ had been ripped off from his composition in ‘Mohabbat naam hai kiska’; when in fact Anu Malik’s number itself was ripped off from Bappi Lahiri’s hit number ‘Disco Dancer’, which in itself is ripped off from Modern Talking’s ‘Brother Louie’! We had blogged about that controversy over here.
This decision of the Delhi High Court should hopefully shakeup the Bollywood music industry. Apart from music composers, entertainment lawyers should take adequate care while conducting a ‘due diligence’ on any music because the injunction in this present case is not only against Dev but also the producer of the movie, August Cinema (India) Pvt. Ltd and also the distributors Manorama Music and Moser Baer Entertainment Ltd. One man’s mistake can have a rippling effect through the entire industry especially since these days film music is exploited through multiple avenues.
McKennitt and her co-plaintiffs were represented by Advocates Nikhil Krishnamurthy and Sai Krishna Rajagopal. The order is available over here on the website of the Delhi High Court.