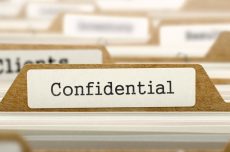 Image of folder tag with text “confidential”. Image from here.

The case, decided by a single-judge Bombay High Court bench, concerned an allegation by the plaintiff, Tarun Wadhwa, of copyright infringement and breach of confidentiality. Wadhwa claimed that he had written a synopsis and a screenplay, Haila Zombie!, which he had shared with the defendant, a fact that was undisputed. Wadhwa claimed that the defendant’s movie, Zombivili, against whose release he was seeking an injunction, was based on his screenplay. To prove the same, the plaintiff tried to establish that there were similarities in the plot of the movie and his screenplay.

Broadly, it was pointed out that the plots of the plaintiff’s screenplay and the defendant’s movie were similar and that if the parts that may be attributed to the plaintiff are removed from the defendant’s movie, then nothing of substance would remain. To establish the same, the plaintiff, in his plaint, compared the plot and synopsis that he had created with that of the defendant’s movie in a chart that considered locations, specifics of plot devices, and picturization. The plaintiff claimed that ‘the germ of an idea’ for a zombie comedy originated from him and the same was conveyed to the defendant, who then infringed his copyright and also breached confidentiality in the process of creating their movie Zombivili.

The defendant, on the other hand, claimed that their movie and the plaintiff’s screenplay dealt with completely different ideas and were distinct from each other. Notably, the plaintiff’s conceptualization was comical whereas the defendant’s was ‘grim and realistic’. The defendant noted that the parts identified by the plaintiff to be a part of his screenplay were actually scenes-a-faire for the genre of zombie movies, over which no monopoly could be claimed.

It is interesting that the plaintiff did not claim originality of his screenplay when seeking copyright protection. He specifically sought protection for the arrangement of the various components of the film, thus, seeking protection over its specific expression. However, the plaintiff also did not argue that his arrangement of the plot was substantially copied by the defendant. It was rather argued that individual elements were used by the defendant. Thus, effectively only arguing that particular scenes of the screenplay and the movie were similar without making a case for ‘substantial similarity’ between the works. The same is noted in the judgment with it stating that the “commonality of the arrangement of known elements must be demonstrated” (emphasis added) and not merely the commonality of known elements for an infringement claim to be successful.

The claim of individual elements being infringed runs contrary to accepted tenets of establishing that copyright infringement has occurred. It does not prove that the defendant actually copied the work and also does not exhibit sufficiently that the copied elements were protected. Since the plaintiff points to a limited number of similarities between the screenplay and the movie, it is also possible to discern that there could exist enough dissimilarities that make them substantially different from each other. Merely showing certain elements were copied does not pass the threshold for copyright infringement.

While the judgment notes that breach of confidentiality and copyright infringement offers a similar remedy in the form of an injunction, it is pertinent that copyright and confidentiality law operate in different spheres, and the minimum requirement for the two vary, with copyright law setting a higher threshold for what can be protected. For breach of confidentiality, there must be both information that is not available in the public domain and the communication of this information in confidence, either expressly or in an implied manner. For copyright infringement, it is necessary to prove that there is similarity in the expression of an idea.

The judgment observes that it is necessary to prove all four elements. Further, based on these factors, it was held that what is essential for confidentiality, was not the originality of expression but rather the need for the information to be proprietary. This emphasizes the wider ambit of confidentiality law, under which it is possible to protect original ideas, and also the fact that confidentiality law protects the substance of the information rather than its form of expression, which falls within the extent of protection under copyright law. The judgment also clearly conveys that while there exists protection outside the scope of copyright law, for any equity-based remedy under confidentiality law to take effect there is an evidentiary burden to be fulfilled.

Apart from reiterating the requirement for proving breach of confidence, the judgment clarifies how copyright infringement claims interact with the same. It reinforces the importance of the idea-expression dichotomy when it comes to proving copyright infringement and the need to prove that the tangible arrangement of an idea, i.e., its expression was copied when claiming the same and not merely that individual elements were similar. With reference to both copyright infringement and breach of confidentiality, the judgment’s insistence on exactitude and precision in the claims being made provides a distinct clarity regarding the prerequisites to be established while seeking injunctive relief.