Sometime ago IPKat had carried this interesting post on a decision of the General Court sitting in Luxembourg, in the case of Tilda Riceland Pvt. Ltd. v. Office for Harmonisation in the Internal Market (Trade Marks & Designs) (OHIM). We somehow missed it but as they say better late than never. 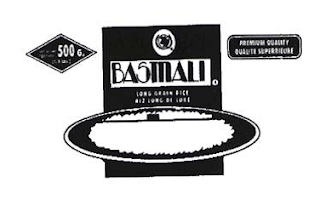 The basic facts of the case are quite simple. Siam Grains Company Ltd, a company incorporated in Thailand, had filed a trademark application, in 2003, with the Trade Marks Department of the Office for Harmonization in the Internal Market (OHIM), European Union, for the mark ‘Basmali’ for long rice in Class 30.
Tilda which is an Indian company and also one of the largest exporters of ‘basmati’ from India filed an opposition against this applicant by Siam one the grounds of ‘passing off’ as per Article 8(4) of the Community Trade Mark Regulation (CTMR) & Section 5(4) of the United Kingdom Trade Marks Act, 1994. Since ‘basmati’ was a particular type of rice native only to India and Pakistan and since Tilda has acquired substantial goodwill in the name by virtue of being one of the largest exporters to the U.K., it had the right to oppose the registration of ‘basmali’, since the same would be a misrepresentation to the public most of whom had come to associate ‘basmati’ with a kind of long grain rice exported from India and Pakistan.
In furtherance of its case Tilda cited a judgment of the English Court of Appeal in Chocosuisse Union Des Fabricants Suisses De Chocolat and others v. Cadbury where it was held that there was goodwill in the term ‘Swiss Chalet’ and inappropriate usage of that particular phrase constituted a misrepresentation to the consumer that the chocolate was indeed ‘Swiss Chocolate’.

Tilda lost that opposition before the OHIM when the latter ruled in favour of Siam. The decision of the OHIM can be accessed over here. (Image from here) The OHIM recognized that ‘basmati’ was indeed native to only India and Pakistan, the opponent had failed to file any evidence which could establish that it had a goodwill associated with ‘basmati’ in the United Kingdom. The reason for this being that Tilda was only transporting ‘basmati’ from India to the U.K. where the rice was re-packaged and processed by other companies which would then sell the rice under their own brand names. The ‘basmati’ was not sold in U.K. under Tilda’s brand-name and hence it was unable to show that it had any good-will associated with the sale of ‘basmati’. Since Tilda could not prove any ‘goodwill’ associated with the ‘basmati’ name, it could not oppose the application for a similar sounding trademark on the grounds of ‘passing off’. In pertinent part the court held the following:
To sum up, taking all the above-mentioned factors into account, it is concluded that the opponent did not prove that it has acquired the goodwill necessary to succeed under the law of passing off. As one out of three conditions to succeed in a passing-off-action are not fulfilled, the opposition based on Article 8(4) CTMR must be rejected as it is based on the United Kingdom law of passing-off.
Thereafter, Tilda unsuccessfully appealed the decision to the Board of Appeals. The judgment of the Board of Appeals has been summarized by the General Court in the following words:
In essence, it found that, under Article 8(4) of Regulation No 40/94, the opponent had to show that it was the proprietor of the right on which the opposition was based. In the case before it, however, Tilda Riceland Private had not shown that it was the proprietor of the right relied on. In particular, the Board of Appeal found that the term ‘basmati’ was not a trade mark or sign covered by proprietary rights, but simply the common designation of a variety of rice. The term ‘basmati’ is generic. Furthermore, the Board of Appeal pointed out that the property protected by an action for passing off does not relate to the sign at issue but to the ‘goodwill’. The Board of Appeal concluded that Tilda Riceland Private had failed to show that it had ownership of the term ‘basmati’ and that, accordingly, the opposition did not fulfil the condition, provided for in Regulation No 40/94, relating to the existence of a proprietary right.
In its decision dated 18th January, 2012 the General Court over-ruled the above decision of the Board of Appeals on the grounds that Community Law and U.K. law did not require the opponent to claim ownership of the mark, on the basis of which it was claiming ‘passing-off’. Instead, the General Court ruled that in order to prove ‘passing off’ it was enough for the opponent to establish that it was ‘using’ a mark. The decision of the ‘Board of Appeal’ was hence ‘annulled’.
Curiously, the General Court was silent on the ‘lack of evidence’ issue raised by the OHIM. Does ‘annulling’ a decision result in the Board of Appeals hearing arguments again? Also the GC notes that the Board of Appeals has held ‘basmati’ to be generic and curiously the GC has not expressly over-ruled the Board of Appeals on that point. Moreover why has a private company taken up the task of defending ‘basmati’ when APEDA has claimed that it is the defender of everything related to ‘basmati’?