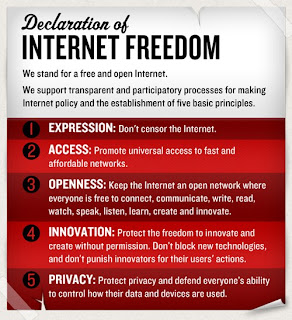 The recent past has seen a spate of internet legislation across several different countries – sometimes attempted and foiled, sometimes successful – which have raised a number of issues which have unfortunately been discussed very minimally. I believe the SOPA and PIPA bills received the largest amount of publicity when several large websites and internet activists vigourously protested against it. More locally, the multiple website blocking Ashok Kumar (John Doe) orders garnered much attention as well, before it was clarified that whole websites were not to be blocked under it. Amlan also wrote a post ‘directed’ at Mr Sibal highlighting some important internet issues. Click here to see other posts we have written on this area. It seems as though, regardless of how much protests most of these bills receive, at the most, they disappear for some time only to come back in another form shortly after. This seems to have pushed a large group of net advocates, entrepreneurs, academics and others, led by Josh Levy of Free Press, Reddit co-founder Alexis Ohanian and others including Yochai Benkler, professor at Yale Law School to come together and draw up a Declaration for a Free and Open Internet.
The principles themselves are quite simple and straightforward.
Given the lack of understanding of digital issues, coupled with greed for power and control amongst policy makers, I hope that this declaration catches on and reaches more concrete positions of authority.
Individuals interested in signing this declaration can do so here. At the time I signed it, there were already 17,000 + signatures and it hasn’t even been one day since it was released. Here’s to hoping that this gains enough momentum to reach some kind of tipping point.
The Verge as put together a good write up of the movement here.