India dropped a couple of places from its last year’s ranking of 62 to rank 64 this year on the Global Innovation Index (GII) which is prepared by INSEAD and WIPO. India’s rank has consistently dropped over the years – 62nd in 2011, 56th in 2010 and 41st in 2009.
Switzerland, Sweden and Singapore once again took the top 3 places, while the Republic of Moldova was the top Lower Middle Income country at 50. China, which topped the Lower Middle group last year at rank 29, came into the Upper Middle category this year but also dropped its ranking to 34th. 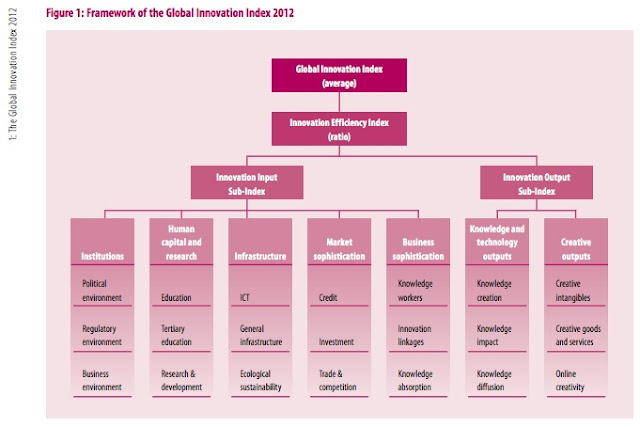 As per the report: “The GII project was launched by INSEAD in 2007 with the simple goal of determining how to find metrics and approaches to better capture the richness of innovation in society and go beyond such traditional measures of innovation as the number of research articles and the level of R&D expenditures.” Instead, the project uses a variety of indices as described in the graph above.
There is some positive news for India though. India’s output to input ratio was only behind China’s, putting India as the 2nd highest on the Innovation Efficiency scale. India’s input rank is quite low at 96, but it’s output rank is comparatively much better at 40. The identified major weakness areas are unsurprisingly Institutions (rank 125) and Human Capital and Research (rank 131). For those wondering, Human Capital and Research are broken down as Elementary Education (rank 113), Tertiary Education (rank 135) and R&D (rank 55).
And so India continues on in it’s Decade of Innovation…
The full report is available here.
For our post on the 2011 report, see here.