In a couple of weeks, I shall be posting a detailed analysis of the methodology employed by the Global Innovation Index (GII) 2017 Report. But prior to that, I felt it would be beneficial to provide readers with a brief synopsis of India’s performance in the said report.

Over the course of this post, I intend to cover the following:

Essentially, the GII is a report generated by WIPO, Cornell University and INSEAD that attempts to measure and rank the innovation capacity and potential of participant countries (127 in all). The idea is to provide a robust set of data for policy makers to rely upon, while framing innovation ecosystems.

Next, we need to look at the kind of data that was taken into account.

The data used to arrive at this figure involves variables that affect innovation, as opposed to those that measure the results.

The broad areas looked into were:

There were a number of sub-variables under the broad heading outlined above, but I do not wish to delve into details at this stage. In the promised follow up post, I will surely explain each of the factors in much greater detail. In the current post, I only intend to provide a superficial glance of the mechanics, such that we can, at least to a certain degree, comprehend the data presented below.

The “Innovation Output Sub-Index” was arrived at using data that measures results of innovation (e.g. number of patent filings), rather than the factors that cause it.

The broad areas considered were:

Again, don’t be too bothered with the terminology. Just get a broad sense of it.

Moving on, the final GII rankings are based on a final figure arrived at by calculating the average of the “Innovation Input Sub-Index” and the “innovation Output Sub-Index”.

The “Innovation Efficiency Ratio” is the ratio of the Input and Output Sub-indices. Basically, it is a measure of the output generated with respect to the input.

Now that we have a brief idea about the GII, let us now look at the actual data.

You can access the detailed report at INDIA COUNTRY REPORT.

India is the leader in the Central and Southern Asia Region. 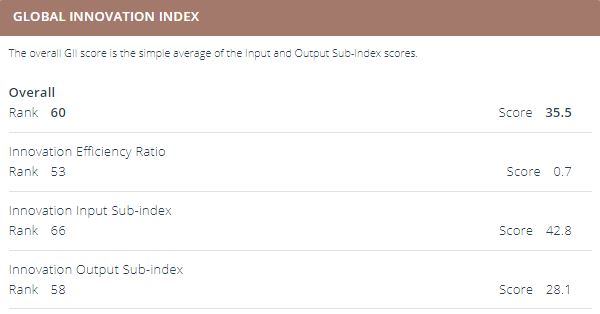 The following is India’s rank under each of the broad areas covered under the Sub-Indices:

You can compare economies with a tool available here.