On October 24th, the Niti Aayog released the first edition of the India Innovation Index (III). The Institute for Competitiveness was the knowledge partner for this endeavour. After years of various other global and pseudo global innovation (and IP) indices, it is a welcome development to see a national index that examines innovation within the country. It’s a 250+ page document with a substantial amount of data and analysis, as well as a large number of (very useful) graphical representations, that give a good few hours of interesting reading. The report has distributed its focus on a number of factors, not placing undue importance on IP. In fact, the report even goes on to state (page 53) that despite the large amount of importance given to patents, grassroots innovations are a fairer indicator for a country like India.

However, there seems to be some dissonance between the Report, and what Niti Aayog (NA) and Institute for Competitiveness (IFC) have said otherwise – for the recommendations that came out of the NA+IFC Roundtable on “Innovation for Prosperity”  held on Dec 4th, 2018, (also referenced and incorporated in the Report) were to consult with industry on Section 3(d) of the Indian Patents Act, as well as on the usage of Compulsory Licences.  In this post, I will quickly go over the report, and then come back to this issue. For a one line summary – overall, great start to examining innovation in the country, but that one page out of the the 256 page document that suddenly incorporates recommendations made prior to the creation of the report gives cause for worry. For the longer version, read on.

Objectives and Approach of the Report

From the preface of report: “The Index aims to perform two objectives. The first one is to help better understand a state’s innovation ranking and relative performance by incorporating key indicators relating to the seven pillars that can be used to understand the performance of a state with regards to its innovation capabilities. Secondly, it aims to empower states to improve their innovation policies while leveraging their strengths and overcoming their challenges”

You can view the overall chart of scores by state on page 56 of the report, or by viewing the PDF here. It was good to see that the report was not reduced to a simplistic ranking of states, but rather, though it did rank states on the above shown 33 indicators, the focus was on identifying areas of strengths and weaknesses of each state. In an attempt to compare states against their relative peers, they were divided into 3 groups in an attempt to compare states against their relative peers:-
(1) North-east and hill states, (2) Union Territories, city-states and small states, and (3) Major states. Contrasted to how reductive ranking-focused reports tend to become, this relative-to-peers strength/weakness approach is a much more useful approach, providing starting points for policy makers, etc. 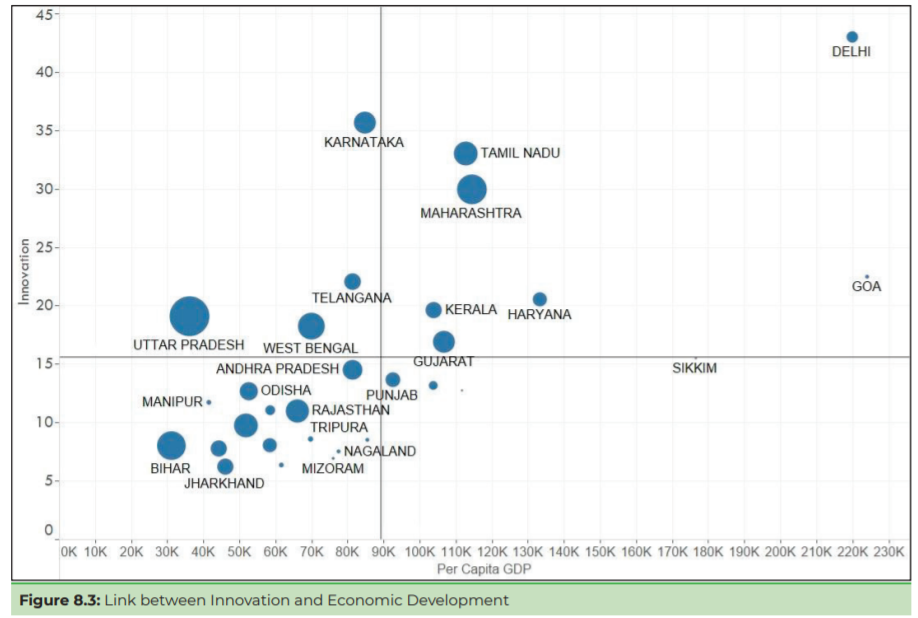 The report also has a number of interesting visualisations based on their data, such as this one.

Clearly some effort has gone into the making of this report, as well as into the communication of the large amounts of data that it has produced. This is very welcome. Having said that – it is somewhat strange that only 3 pages of this report are kept aside for “Learnings and Recommendations”. Out of these 3 pages, 1 page (page 209) seems to just be a summary recap of the 2018 round-table referred to above, along with their recommendations. This is strange, because while the rest of the report relies on the data collected and presented in the report, 1/3rd of the already small ‘Learnings and recommendation’ chapter seem to be presented on the basis of what was discussed at a round-table before this report was created.

There are primarily 3 IP centric recommendations mentioned and all are on this one pager. It mentions that the round-table panelists spent some time discussing two of the most discussed aspects of the Indian IP regime – that of Section 3(d) and Compulsory licenses (CLs). While the language in the report is kept neutral, a look at the slightly more in depth whitepaper from the round-table (which this section of the report indicates it is based on), provides more insight on what the report language is hiding. Referring to both Section 3(d) and CLs, it says that there is wide belief that these are affecting India’s innovative capabilities and therefore claims it is important for the Indian Government and the industry to develop a plan of action beneficial for the industry as well as the general public! It then goes on to recommend the following (emphasis my own) :

There is nothing wrong with involving industry, and indeed, it is desirable to get industry at the table when creating policies etc for innovation, so long as it is along with the various other stakeholders! This blog (and nearly every other Indian source writing on India’s IP regime) has done more and enough on Section 3(d) and CLs as a simple search will show. But even ignoring all of that – given that these recommendations have just been taken and placed into the India Innovation Index – it bears highlighting that the reason mentioned in the whitepaper for these recommendations is that ‘there is wide spread belief‘ these provisions are impacting India’s innovative capabilities!

Taken from Page 6 of the round-table whitepaper. Reminds one of the leaps of logic taken by the US Chamber of Commerce’s GIPC Report.

Further, the jump from this ‘belief’, to the recommendations that industry has the answers, is another cause of mystery to me. Surely some sort of data could have been presented, the basis of which recommendations could be then made? It’s a shame to see that in an innovation report that is otherwise full of actual data and reasonable rigour, these explicitly stated ‘belief’ based recommendations are the ones presented as recommendations for India’s IP regime.

Finally, even though not under the heading of “IP Regime”, the report does make a couple of more interesting suggestions – increasing industry-academia linkages, and encouraging universities to create IP policies. These types of advances are indeed long due and so long as they’re carried out properly, should help India’s innovation potential. However, it does raise a question – what ever happened to the the ‘2008 Protection and Utilization of Public Funded Intellectual Property Bill’ more popularly referred to as the Indian ‘Bayh-Dole’ bill? The intent of the bill had been to regulate the patenting of public funded research. At the time, there was a big hullabaloo around the draft bill, with various concerns being pointed out (see this summary from a conference Shamnad had organised in 2009, and other resources here) along with various recommendations to improve it. On a quick search, I can’t seem to find anything about what happened to the bill eventually. If readers have more information, please do comment below.

In any case, on Sept 9th, 2019, the DIPP released the Draft Model Guidelines on Implementation of IPR Policy for Academic Institutions. Given that this is essentially the answer to one of the recommendations from the India Innovation Index, it will be interesting to do a more in-depth review of these policies – and I hope to bring this out in the coming few days.