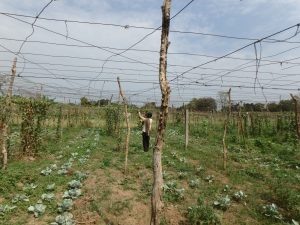 In Part-I of this three-part post, I provided a brief summary of the compound system of registration for parents and hybrids, created under the Public Notice 01/2019 of the PPV Authority. I had offered my view that the notice is ultra vires as far as it affects the term of protection for hybrids. I had ended it by noting prima facie that the notice may also appear ultra vires as far it links the eligibility criteria between parents and hybrids, with a caveat that a further discussion may be needed.

In this Part-II, I continue discussing the issue of ultra vires, qua the aspect of linking the eligibility criteria – Distinctness, Uniformity and Stability, or DUS for short.

If the parent lacks stability, the parent is anyway not registrable independently. However, there may be a logical reason for this to affect the hybrid as well.

As per Section 2(za)(iii), for a hybrid to be considered a ‘variety’ in the first place, the hybrid must be “considered as a unit with regard to its suitability for being propagated, which remains unchanged after such propagation”. Simply put, the focus here is that the variety can be propagated or reproduced ad infinitum without being changed. There was a debate sometime in the past as to whether hybrids would fulfil this requirement. I don’t intend to replay this debate here but the reason for this debate was that hybrid seeds would not always result the same hybrid plant. Readers may recollect the pictogram I took out in Part-I. The complete pictogram from the same source indicating this point is as below: 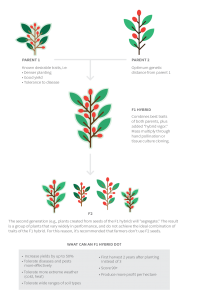 The conclusion of this debate at the UPOV and the EU level was that the F1 hybrid (the first-generation hybrid) could fulfil this criterion since the hybrid can be propagated unchanged through the crossing of its parental lines. The F2 hybrid (the second-generation hybrid) would not fulfil this criterion because the traits will ‘segregate’ and they will not be identical to the F1 hybrid.

Similarly, for a hybrid to be registered, it must independently fulfil the criterion of ‘stability’. A variety is ‘stable’ as per Section 15(3)(d) “if its essential characteristics remain unchanged after repeated propagation or, in the case a particular cycle of propagation, at the end of each such cycle”. Once again, the F1 hybrid could fulfil this criterion since the hybrid can be reproduced unchanged by repeated use of its parents. The F2 hybrid would not fulfil this criterion.

On a similar note, the PPV Authority may also justify a linkage between the uniformity of the parents with that of the hybrid. As per Section 15(3)(c), a variety is uniform, “if subject to the variation that may be expected from the particular features of its propagation it is sufficiently uniform in its essential characteristics.” ‘Uniformity’, in simple terms, refers to individual plants of that variety consistently having the same characteristics. Logically, if the parents are not ‘uniform’, the hybrid produced therefrom is unlikely to be uniform.

P.S: However, what confuses me is that the language used in the Public Notice and the Meeting Minutes of August. These documents do not seem to link uniformity with uniformity, and stability with stability. Instead, there seems to be a “mix and match” approach for these criteria, as I noted in Part-I. Perhaps, the arbitrariness of the Public Notice could be questioned by the sheer ambiguity in language. Or perhaps, there is another element of the puzzle which I am missing.

The International Seed Federation takes the view that the DUS of a hybrid can be tested on the hybrid or on its parents. A similar sentiment is expressed in the UPOV document that provides a general introduction to DUS testing, where it is indicated that a hybrids’ DUS can be tested through the parents involved. TGP/8 and TGP/9 from the UPOV provide further details as to how distinctness of the hybrid can be assessed with the help of parents (the so-called “parent formula” approach).

So, Is the Public Notice Ultra Vires Qua the Linking of Eligibility Criteria?

From the above analysis, it appears that there is a substantive and logical link between the DUS of parents and the hybrid. The contention of the PPV Authority could be that if the correct application of the statute in any event would link the eligibility criteria of the parents with the hybrids, making this explicit vide a Public Notice cannot be questioned. At best, the PPV Authority could contend, the Public Notice is simply a formulation of DUS testing guidelines applicable for hybrids, qua the linking of eligibility criteria.

Let us examine the scheme of the Act, Rules and Regulations in the context of the DUS testing requirement. For simplicity-sake, I have broken this down to the following matrix:

Thus, the statute does contemplate the possibility of the Authority requiring seeds of both the candidate variety and the parental material for testing purposes. Whereas the “standards” of testing are to be specified in “regulations”, which the Authority is empowered to issue under Section 95, the “manner and method” of testing is to be prescribed in “rules”, which the Central Government is empowered to notify under Section 96. In either case, whether it is a rule of a regulation, the Act prescribes a procedure under Section 97, whereby it is placed before the Parliament.

The first point to be made here is that the Public Notice is neither a rule nor a regulation and it has certainly not passed through the procedure prescribed under Section 97. When a statute empowers doing something in a certain way, it must be done only in that way and deviance cannot be tolerated. Of course, while this would strike down the Public Notice, the Authority can re-issue the same content as a Regulation after ensuring appropriate compliance under Section 97.

Second, and the more important issue to be decided substantively is whether the linkage in eligibility criteria is a matter of “standard” or does it concern the “manner and method” of testing? The PPV Authority is entitled to frame regulations only if it concerns the former and not the latter (that is for the Central Government). In my view, the Public Notice is providing a manner and method of testing – the hybrids’ DUS is being evaluated by testing the parent. In which case, the PPV Authority does not have the power under the PPV Act to frame such a regulation.

The issue is complicated further by Rule 22(2) & (3) of the PPV Rules framed by the Central Government. Under these clauses, the Central Government has effectively empowered the Authority, inter alia, to “develop DUS test and other test criteria”. Arguably, a method of testing hybrids by testing their parents could be justified as a “DUS test…criteria” applicable for hybrids. However, supporting the Public Notice (or a regulation with the same content) under this Rule may not turn fruitful in the long-run, because, on the face of it, Rule 22(3) is contrary to the legislative intent behind Sections 19(1) & 19(3), which categorically split the subject matter on which the Authority and the Central Government are to act.

In my analysis, therefore, the Public Notice is unlikely to withstand legal scrutiny qua linking of eligibility criteria. Even if framed as a regulation under Section 95 by the Authority, the question of power remains. Nevertheless, I would think that any Court confronted with the issue may find it necessary to interpret Rule 22 of the PPV Rules carefully and you never know, Rule 22 itself may have to be challenged.

Stay tuned for Part-III, where I intend to discuss further on the Public Notice.