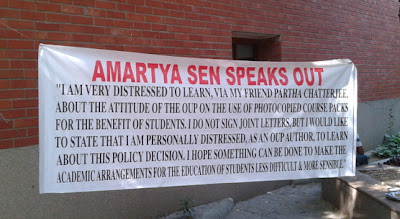 In a momentous development, the Delhi High Court permitted an association of students to intervene in a highly controversial law suit filed by leading publishers against Delhi University (DU) and its photocopier.
Here is the link to the intervention petition filed on behalf of the “Association of Students for Equitable Access to Knowledge” by Jawahar Raja and Rajat Kumar, two Delhi based lawyers, who’ve been at the forefront of several legal battles to secure social justice. They were led by counsel Sanjay Parekh who forcefully presented the matter to the court.

For background to this law suit, you can read Lawrence Liangs’ potent piece in Kafila and my editorial in the Indian Express. For a more entertaining rendition, you can watch this Youtube video featuring a catchy copyright jingle.

The academic community, including students and faculty have been up in arms against this rather aggressive law suit which seeks to prohibit course packs altogether. Noted Nobel Laureate, Prof Amartya Sen expressed his distress at the law suit and decried this attempt to profiteer at the expense of students. So did Prof Kaushik Sunder Rajan.
The publishers’ naturally objected to the student intervention and argued that even if intervention is admitted, it should be limited to points of law. The judge however disagreed and held that the student association would be admitted as a full fledged party to the law suit, with the ability to file a written statement and lead evidence etc.

For those interested in tracking this case that will test the bounds of educational exception and fair use under our copyright act, please see this link which contains all our previous posts on the issue.  To make it simpler, I’m outlining a brief trajectory of the unfortunate law suit and its unfolding:

i) Leading publishers sue Delhi University (DU) and its photocopier (Rameshwari) for copyright infringement in August 2012.

ii) An injunction allegedly restraining DU and the photocopier ensue in October 2012, owing to an unfortunate grammatical (mis) construct.

iii) Delhi University appeals the order in November 2012. The appellate court asks them to file a review petition before the single judge. However they opt to file an Order 39 Rule 4 application for vacating the restraining order. This application is now before Justice Rajiv Sahai Endlaw. Although the matter came up on Tuesday (26th Feb), it was not taken up by the judge. The matter is now posted for April 25th.

The student association has been given two weeks to file their written statement. As for the main documents pertaining to this case, see below:
i) The Plaint filed by leading publishers (OUP, CUP and Taylor & Francis)
ii) The Written Statement filed by DU
iii)  The Student Intervention Petition
Kudos to Jawahar Raja and Rajat Kumar (who took up the matter probono) and to the many students who toiled hard to secure the admission of this intervention. From this blog, Amlan Mohanty and Sai Vinod have been playing leading roles as law students at the forefront of this struggle to ensure equitable access to education.