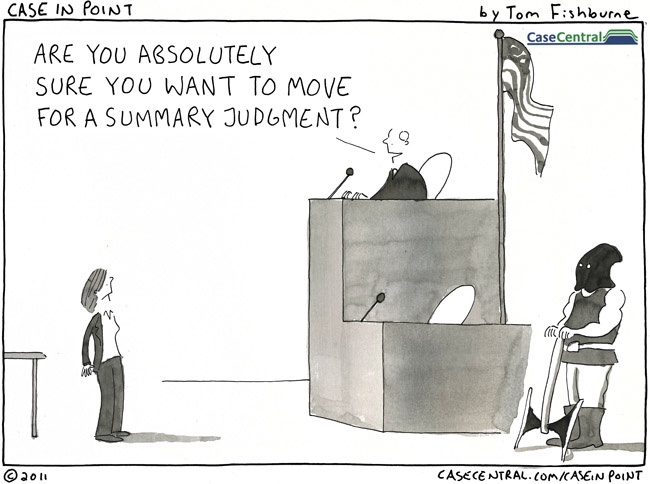 In a succinct and very well written order, Justices Badar Durrez Ahmed and Ashutosh Kumar of the Delhi High Court delivered the first ever decision to interpret Summary Judgement Proceedings under Order 13A of the Civil Procedure Code (‘CPC’). Passed on the 4th of January, 2016 – this case: Bright Enterprises Private Ltd. & Anr. v. MJ Bizcraft LLP & Anr. (read the order here) was originally instituted to claim a permanent injunction restraining inter alia trademark infringement and dilution of goodwill, as it was contended that the Defendant’s use of ‘PRIVEE’ was identical or deceptively similar to the Plaintiff’s trademark ‘MBD PRIVE’ and ‘PRIVE’. It is worthwhile to note that while the Plaintiffs used ‘PRIVE’ in the hotel business, the Defendants used ‘PRIVEE’ in relation to a nightclub in the hotel Shangri-La Eros.

The case was filed as a commercial suit, as the damages claimed exceeded Rs. 1 crore, which qualified as ‘specified value’ under the Commercial Courts, Commercial Division and Commercial Appellate Division of High Courts Act, 2015 (‘Commercial Courts Act’). The suit was dismissed in limine by a Single Judge who held that suits ‘doomed to fail and of which there is no chance of success’ should be dismissed at whatever stage the court finds it to be so. The Single Judge had relied on two judgements to come to this conclusion – Dr. Zubair Ul Abidin v. Sameena Abidin and Camlin Private Limited v. National Pencil Industries. The Court found, at the outset, that the reliance placed on these judgements was misguided.

The Single Judge, in dismissing the suit had invoked Order 13A, which details the procedure to be followed for Summary Judgements. A few important facets of Order 13A for this case are as follows: A summary judgement is the procedure by which Courts may decide a claim to a commercial dispute without recording oral evidence. An application for summary judgement may be made any time after the summons have been served on the defendant, but not after the Court has framed issues. Summary judgements may be passed if the Court considers that there is either no real prospect of either the Plaintiff or the Defendant succeeding, or that there is no other compelling reason why the claim should not be disposed of before recording oral evidence.

Order 13A goes on to detail the procedure to be followed in these situations, and relevant to the present case is the mandate that the application must contain a statement that it is an application for Summary Judgement made under the Order. It is the case of the Plaintiffs that there was no application moved in respect of a Summary Judgement, and hence, one cannot be delivered by the Court. It was further contended that the judgement of the Single Judge had been delivered before the issuance of summons, and hence was liable to be set aside. The Plaintiffs argued that the dismissal of the suit did not consider the averments made in the plaint. They contend that while the plaint could have been rejected under Order 7 Rules 10 and 11 of the CPC, this is not the case in the present matter. They argue that as long a cause of action is disclosed in the plaint, the suit cannot be dismissed without the issuance of summons, on the ‘mere’ ground that it is weak and unlikely to succeed.

On the other hand, the Respondents argued that the Order had to be interpreted in such a way as to consider every procedure to be permitted unless expressly prohibited. Therefore, it was contended that should the legislature have intended to prohibit the issuance of a summary judgement, it would have included an express provision stating the same. 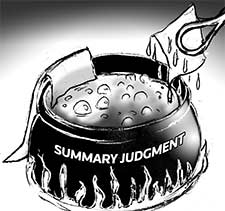 The Court first examined certain provisions of the CPC: Section 9 makes clear that Courts shall have jurisdiction to try all suits of a civil nature except those expressly barred. Section 26(1) mandates that a plaint is to be presented for institution of the suit. Section 27 and Order V Rule 1 state that a summons ‘may’ be issued to the Defendant to appear and answer the claim against him after a suit is ‘duly instituted’. The Court noted that since the present case was one of dismissal of the suit on merits, the only issue to be examined was whether the Court had the discretion whether to issue summons, since the suit had already been duly instituted.

It was held that the use of the word ‘may’ does not give the Court any discretion in the matter, and that the issuance of summons was not optional. Therefore, it was opined that in all cases not barred by Order 7 Rules 10 and 11, the issuance of summons was mandatory – and consequentially, that the Single Judge ought to have issued summons to the Defendants. The non-issuance, in the Court’s eyes was contrary to the provisions of the statute.

With regard to Order 13A, the Court held that the Single Judge erred in invoking the provisions for a Summary Judgement, as this power could only have been exercised in the window after the summons are served on the Defendant, and before the Court frames issues in the suit. It was stressed that the specific time period within which an application for Summary Judgment could be made was of utmost importance. The Court observed that the provisions relating to Summary Judgements were exceptional in nature, and out of the ordinary course that a normal suit would follow. It was held that for this reason, the conditions mentioned in Order 13A were to be followed scrupulously, or it may result in gross injustice.

In addition to stressing upon the importance of the time period within which the application could be filed, the Court held that a Summary Judgement would not be possible without an appropriate application, which complied with the mandated contents in Rule 4 of Order 13A. The Court additionally observed that both the application, and the respondent’s reply were required to disclose all material facts and identify points of law, if any; as well as include any documentary evidence relied on. It was held that both should also address the real prospects of succeeding, or dismissing the claim. The respondents reply should also include the issues to be framed for trial, as well as identify further evidence to be brought on record at trial; the reply should additionally state why the Court should not proceed with a Summary Judgement in light of the evidence and material on record.

On a plain reading of Order 13A, the Court held that the proceedings were adversarial and not inquisitorial in nature. Therefore, a summary judgement could not be rendered in the absence of an adversary, and merely on the inquisition by the Court. In conclusion, the Court highlighted certain sections of the Single Judge’s order which lead to the deduction that the Learned Judge had based his conclusions on his own research, without giving an opportunity of rebuttal to the Plaintiffs. The Court was of the opinion that the Single Judge erred in this regard, as he could not himself become a witness in a case before him.

Order 13A is a recent addition through the Commercial Courts Act, which was cleared by the Cabinet and received Presidential assent on October 23, 2015. This case brings up the question of the course of action judges may take if they find a plaint not to be worthy of adjudication. It may be rejected, or returned – which the Court importantly distinguished from the dismissal of a suit. Order 7 Rule 11 of the CPC lists circumstances in which a plaint may be rejected, one of which is the non-disclosure of a cause of action. While the dismissal of a suit would result in a subsequent suit being barred by res judicata, the return, or rejection of a plaint would not have the same consequence.

The present order is hard hitting, to the point, and crystal clear. It fills an important lacuna in the law, as to the best of my knowledge – no Court has interpreted the procedure for Summary Judgements before this decision. When the Single Judge invoked a Summary Judgement under Order 13A without issuing summons, he did not give the Plaintiff the right to prove his case. The Court was eloquent in holding that: “a court may feel that the case of a Plaintiff is weak but that is no ground whatsoever for throwing out the suit log, stock and barrel without giving the Plaintiff an opportunity of proving and establishing its case”. Justice Ahmed even borrowed Lewis Carrols words to describe the situation – “the hurrier I go, the behinder I get”.

Even though the inclusion of the procedure for a Summary Judgment is praiseworthy, Courts have seen one too many frivolous lawsuits admitted. As the learned judges in this case rightly note, the conditions mentioned in Order 13A are to be very strictly followed, and the ‘real prospect’ of succeeding in a claim or defence has to be interpreted not only to avoid injustice to parties, but to keep out frivolous litigation as well.