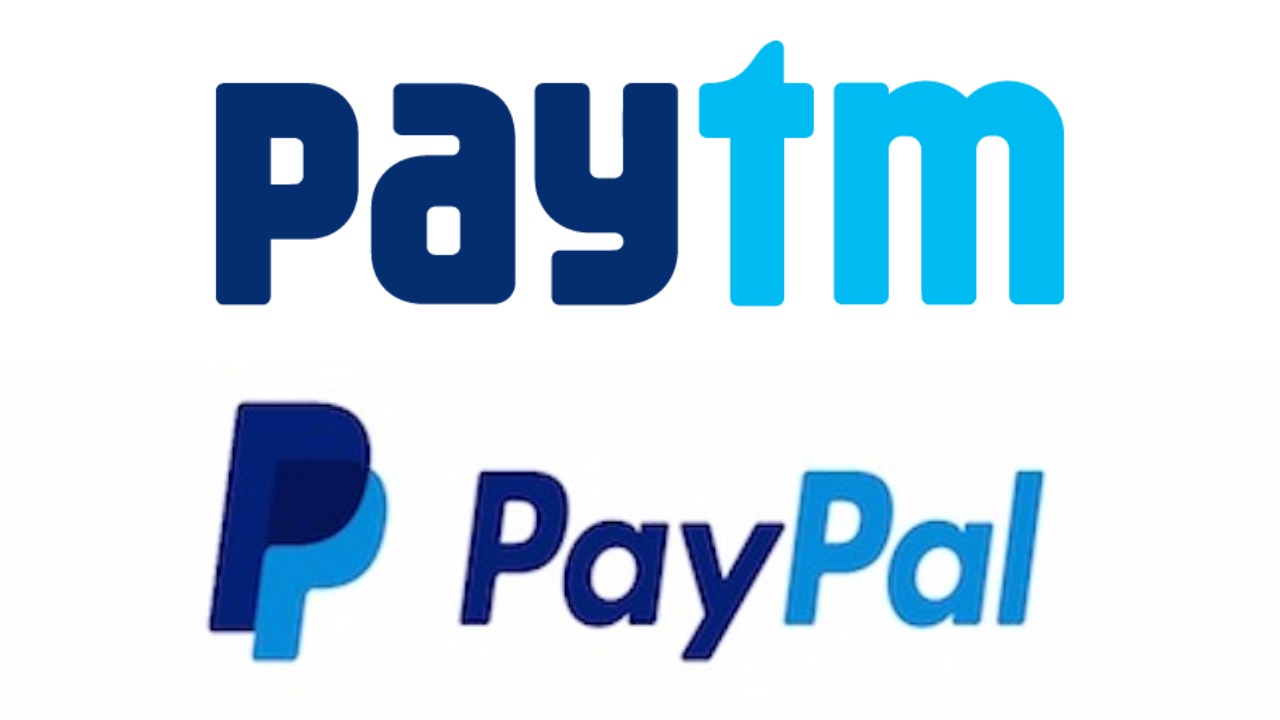 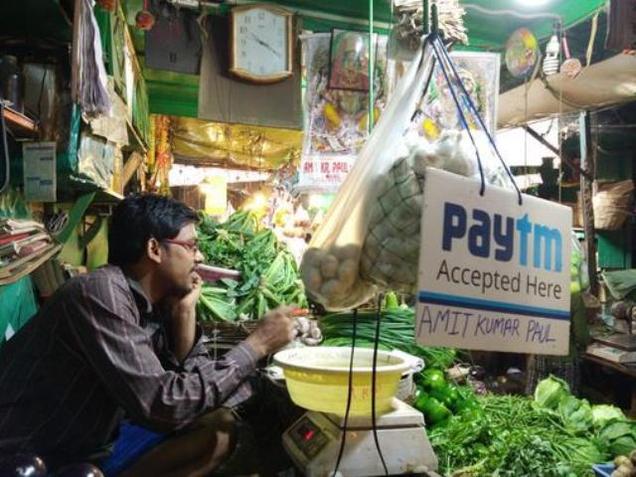 Have you been seeing the PayTM logo everywhere? Outside every shop, every vegetable vendor and even at the local panwadi? Well, you have been diagnosed with the PDSD (Post Demonetization Stress Disorder). Fret not; mobile wallets are here to make all the stress go away! Among others, PayTM has already become frontrunner in this market, having stupendously cashed in on the Government’s drive to go cashless. Little did PayTM know that its quick success has awakened an envious competitor from the Wild West.

On November 18, 2016, PayPal instituted a Notice of Opposition in PayTM’s application under Class 36 to register its TM. PayPal is one of the world’s largest online payment services with presence in over 190 countries and the ability to transact in over 100 currencies. PayPal alleges in its notice that PayTM has misappropriated the latter’s bicolor scheme. We also have a feeling that this dispute will soon escalate into a passing off action too; wherefore we have dealt with issues beyond the scope of the opposition proceedings as well.

Here, we shall try and analyze some of the issues involved in the present case. Let’s start with procedural objections.

PayTM may argue that PayPal’s opposition should be rejected since it comes nearly 4 years after PayTM first started using the mark. No claims of passing off or infringement were made earlier. PayTM may also argue that PayPal has filed the opposition with a clear intention to damage the immense spurt in PayTM’s reputation after the recent demonetization in India. Having read the fine print, we believe that PayPal will take this round.

It is true that PayTM filed its application in 2012; however, it was advertised in the TM Journal (No. 1754) only on July 18, 2016. Section 21 of the TM Act enables any person to oppose a trademark by filing Form TM-5 within 3 months of the advertisement of such mark in the TM Journal; with a maximum extension of another month. PayPal seems to have filed its notice of opposition on the very last day of this time frame on November 18, 2016. Therefore PayTM must file reply to PayPal’s opposition notice within a maximum period of three months after PayTM is formally in receipt of the opposition notice; failing which the PayTM Device Mark may be deemed abandoned.

According to us, PayPal cannot claim exclusivity over a generic word like “PAY”. PayPal will have to prove that “PAY” has acquired a secondary meaning exclusively in relation to PayPal’s use in India. Chances to prove this seem very bleak. We can compare this decisions analyzing whether “TODAY” can be monopolized by any one news group. The Delhi High Court answered in the negative because there was no evidence of them using the stand-alone term “Today” for any of their services. SpicyIP has covered this issue here. Therefore, we believe that PayTM will take this round since several other e-wallet companies use PAY in their trademarks or trade names. Similarly, the Bombay HC recently held that “SHAADI” cannot be monopolized since it’s a word of common parlance in India and would therefore be descriptive of online marriage portal services. Read our post on this dispute here.

The colour trademark is a non-conventional trademark which is still in its infancy in India. For instance, the Indian Trademark Registry rejected Cadbury’s attempt to monopolize its instantly recognizable purple packaging for lack of distinctiveness. SpicyIP has previously covered this issue here and here. Interestingly, the ‘Color Depletion Theory’ justifies the rejection of trademark protection for single color marks on grounds that protection will eventually lead to the depletion of all available colors. Read our previous post on colour trademarks here.

However, when a combination of colours is in question, the story changes dramatically. The Delhi HC has previously extended TM protection to the distinctive green and yellow colour scheme used by Deere on its tractors. The Court held that the Defendant’s manner of using Deere’s color scheme was deceptive since the tractors manufactured by both the parties had green bodies with the wheels and seat painted in yellow.

PayPal’s application for its particular bicolor device (pictured above) was filed in 2014 via an international registration. In its application, PayPal has stated that “…the color(s) medium blue and light blue is/are claimed as a feature of the mark. The mark consists of the word PAYPAL in stylized lettering, where the word “PAY” appears in medium blue and the word “PAL” appears in light blue.” Interestingly, this TM application has been objected to by the Indian Trademark Registry. Unfortunately, we are unaware of the exact nature of the TMR’s objections since the examination report is unavailable on the TMR website.

Nevertheless, PayPal may still have locus to bring an action for infringement. For instance, the Delhi HC has previously held that that an Applicant is entitled to file a suit for infringement even by merely filing an application for registration of the mark.

Next, we analyze whether PayPal has enough goodwill and reputation to prove its claims, inter alia of being a well-known mark. Two claims come into play.

First, that PayPal has acquired an enviable reputation worldwide; such that consumers in India associate the mark (and the colour-scheme) as emanating from PayPal alone. PayPal will be required to establish its reputation in the Indian market. To begin with, PayPal claims to be available in more than 200 markets. Website analyst Alexa.com has ranked PayPal.com 25th in the US and 60th across the globe in terms of overall traffic (views and clicks). These facts go a long way to show that PayPal has acquired immense trans-border reputation over a long duration.

Indian Courts have regularly applied the doctrine of spillover of reputation to allow foreign TM owners to protect their marks in India after the Supreme Court decision in NR Dongre v Whirlpool. In particular, a strong online presence has been recognized by the Delhi HC as a legitimate indicator of such trans-border reputation. Further, the SC has also previously affirmed the Calcutta High Court’s position that such a foreign TM owner is not required to his goodwill in the Indian market to claim protection of a globally well-known mark. We have previously covered these issues here, here, and here. Importantly, PayPal also operates business in India through a website with an Indian domain which is marked with PayPal’s claimed bicolor device mark.

Therefore, we believe that PayPal most certainly has acquired immense global reputation and as such it should be entitled to bring a suit in India for passing off its bicolor format. However, the question is: will this right lead PayPal to a desirable remedy? 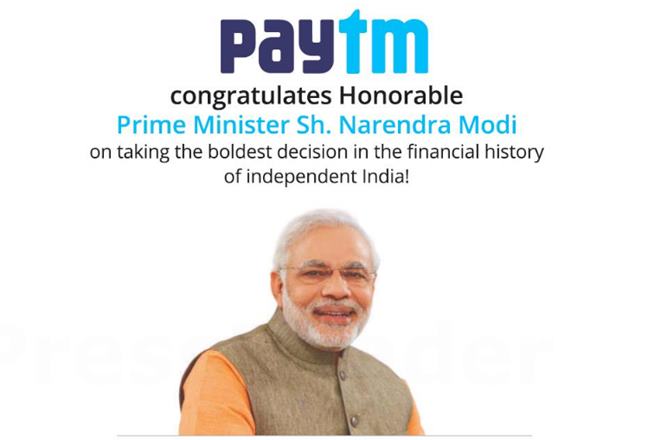 PayTM has clearly benefitted from demonetization, and its recent success has brought it fame and goodwill. For instance, Bloomberg Quint notes that PayTM saw a 4.7 percent jump in its valuation in just three months. Similarly, Tech Circle reports that the currency crunch has skyrocketed PayTM’s user base to 164 million customers with nearly 40,000 merchants are singing up on the platform every day. Not to forget PayTM’s front page newspaper ad that had the Prime Minister himself modelling for the company (without his consent, ofcourse).

PayTM stands a fair chance to prove not only that it has accumulated goodwill in India post demonetization, but also that ‘PAYTM’ (in its bicolor format) has acquired a secondary meaning among consumers. It can rely upon the fact that many FinTech consumers have begun to use PayTM as a verb; just like Google. Fortunately for PayTM, the Indian FinTech market is quite clearly demarcated between various distinct players and ‘PAYTM’ is used by people as a verb exclusively with reference to PayTM’s services. However, sometimes this can be a precarious position to be in, as the trademark can lose exclusivity and become publici juris due to the fact that it has come to be associated with the activity instead of the proprietor. Famous examples of trademark genericide are Xerox, Thermos, Escalator etc. Read our previous post on this phenomenon here

In light of PayTM’s strong reputation and independent identity in the Indian market, we believe that it’s highly unlikely for any reasonable person to be reminded of PayPal after viewing PayTM’s bicolor mark, thereby eliminating any chance of misrepresentation or deception.

It makes strategic sense for PayPal to attempt to enter the Indian market in a big way now, since it is likely that India will be viable market for all kinds of cashless payment services in the years to come. Importantly, in October last year, the RBI permitted 100% FDI in “Other Financial Services”, including mobile wallets under the automatic route. The RBI’s previous stringent regulations did not allow PayPal to do business in India on grounds that it was not a banking company and thus, could not be permitted to hold money. These regulations were put in place in order to ensure that such services do not become vehicles for money-laundering and tax evasion. This new development means that PayPal can now spread its wings in India, both legally as well as strategically.

While PayPal may still have a legitimate shot at capturing the Indian market for mobile wallets, we believe that it would be unlikely that it will see any success in its trademark war against PayTM.

We cannot say for sure who’s going to take Round 1 on what seems to be just the beginning for this epic battle. This Pay-war has started in the Trademark Office but shall surely see its day its court as neither party is likely to back down in the fight for its rights. Spicy IP shall keep you posted!