If the tone I use happens to be terse or unenthusiastic over the course of this series, I beg you to excuse me. Microsoft Word decided to stop responding and consequently, I lost three draft pieces. To make matters infinitely better for me, deadlines are fast approaching.

So, let me relax, breathe and start all over again. 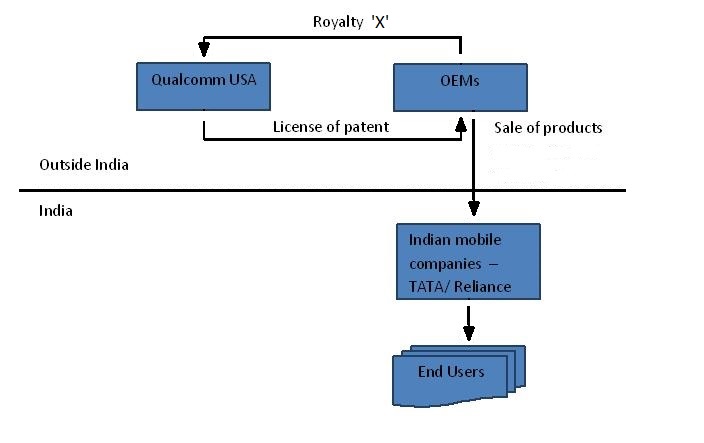 #2“for the purposes of making or earning any income from any source in India.”

So the question is:

How the heck do we determine if the “source” is in India?

Let us look at what the lovely Tribunal had to say in a crisp order of 120 paragraphs.

A majority of the order, much like Microsoft Word, is unnecessary for our purposes.

After setting aside all trivial matters, the order finally arrives at the crux of the matter.

The Order held that the relevant judgment call for determining the “source” is to identify the patent’s situs of use.

If you are of the curious kind, you would naturally ask:

How did they arrive at that?

For answering that question, we will have to go through a few authorities cited by the order.

Reference was made to a commentary (published by the International Monetary Fund) and also, to the US Internal Revenue Code, from which we can deduce that taxation on the basis of situs of use of IP is quite prevalent in a fair number of jurisdictions and also the US (Qualcomm’s home jurisdiction).

Reference was also made to a “well  known” commentary (Prof. Michael Lang) that spoke about S. 9 of the ITA:

“In international law practice, there are no significant limits on the tax sovereignty of States. In designing the domestic personal tax law, the national legislator can even tax situations when, for example, only a “genuine link” exists. It is only when neither the person nor the transaction has any connection with the taxing State that tax cannot be levied.”

“15.3 Under the new provisions, royalty income of the following types will be deemed accrue or arise in India;

(c) royalty payable by a non-resident if the payment is relatable to a business or profession carried on by him in India or to any other source of his income in India.”

Furthermore, the word “utilized” in the statute also seems to point towards the significance of use, as opposed to residence of any of the relevant entities.

Now, that I have explained where the situs of use analysis came from, let us move on to the next stage of analysis: Distinction between use of patent in manufacturing and by the end consumer.

The order summed it pretty clearly in the excerpt below:

“57. It is important to bear in mind the fact that taxation of royalties is not a taxation of business profits of any entity, but, quite contrary thereto, it is taxation of the consideration of a patent or know how etc. which belongs to the person who owns the patents. It is thus taxation of income of the person owning the patents and it is taxation in the jurisdiction of end use of patents. The emphasis is on the situs of use of the patent rather than situs of the entity making payment for the royalty. A fortiori, if the use of patent is used in the manufacturing process, for example, the taxation should be in the tax jurisdiction in which manufacturing activity is carried on rather in the tax jurisdiction in which ultimate consumer of product is located. However, if the patent is used by the end consumer and the manufacturer of a product is only a conduit for collection of such a consideration for use by the end consumer, the taxation would be warranted in the end use jurisdiction.”

The issue was referred back to the Assessing officer to ascertain whether the patents were used in the manufacturing process or by the end consumer.

If I were to hazard an analysis, I would be inclined to state that the patents are being used by the end consumer in India and not the manufacturer. As I understand it, Qualcomm is providing the OEM with chipsets, which the OEM merely incorporates into the handset. Therefore, I don’t really see the patent being used in the manufacturing process.

Now that we have dealt with the technicalities in considerable detail, let us take a step back and try to understand the Revenue department’s arguments at a more abstract level.

Basically, the Revenue department is contending that Qualcomm is extracting revenue out of India, but at the same time is attempting to avoid taxation by using a circuitous process.

And I agree with the Revenue department.

Next, we will discuss the other issues discussed in the order.

i. Distinction between “copyright” and “copyrighted article” (click here)