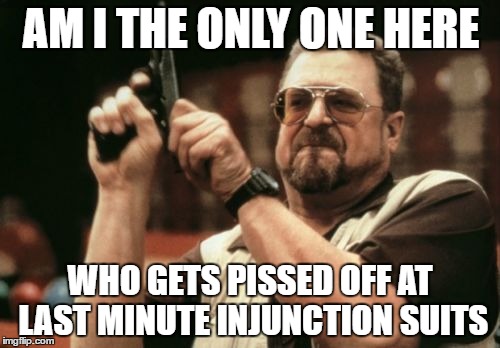 Somewhere midway through reading Justice Patel’s order dealing with the Phillauri copyright infringement case, I was convinced that the Plaintiff’s counsel would soon have to initiate a medical course involving anti-depressants. J. Patel was absolutely brutal.

I am getting ahead of myself. The Plaintiff’s essential argument was that Phillauri infringed to the extent of using a tree spirit and the tree spirit’s marriage in the story. J. Patel brushed this argument aside by stating that Mangal Phera’s treatment of the subject matter was not original in the first place. He relied on past records of tree marriage and tree spirits to substantiate his statement.

We need not get too engrossed with the factual details, but we need to note that for getting an injunction order to prevent the screening of a movie, one needs to “make out so overwhelming a prima facie case that all other considerations pale into insignificance” and not just make out “some” prima facie case.

Now that I am done with the basic update, I would like to bring your attention to the most significant outcome of this case. J. Patel, in no unclear terms, heavily reprimanded the Plaintiff for coming to court in the last minute for seeking an injunction order.

From the order, I have attempted to reconstruct the proceedings in court. Let me make it clear that the following account is semi-fictional and I have stretched, added and changed irrelevant details for “comic effect” or what I like to believe is the “comic effect”. Please do understand that lawyers work under a multitude of constraints and pressures. Though I have painted a particular picture in the subsequent section, it is a deliberately exaggerated one and I only wish to draw your attention to the problem of complainants, seeking prohibition of screening, approaching courts only a few days from the movie’s release.

The following people occupied the space of the Bombay High Court Room:

The peon, having dealt with the sophisticated task of changing the door’s position, sat about aloofly.

The court clerk, on the other hand, bent over his old mechanical typewriter, eagerly awaiting the departure of the faintest of speech from the honourable judge’s lips.

The clerk rattled away at the old machine.

The peon stared into the distance.

As to how the stenographer/clerk recorded the sneeze, I am slightly unsure.

“Counsel, this is inappropriate.

At this point, J. Patel had a minor frown on his face. An accurate mental picture of the said frown could be arrived at by imagining oneself entering a disorganized room or viewing a grotesque infant.

The clerk stopped to rest his writhing fingers for a few seconds. He started to envy the peon’s job, who had by now, shifted his attention from the complex machine (door) to the fluttering pigeons outside.

The counsel, with his head hung, stood in absolute silence.

J. Patel continued “How about I take this up on Wednesday?”

I am not sure as to what the counsel indulged in till that point. But his subsequent response would induce the seasoned analyst to surmise that he was partaking in an activity that, in all probability, did not involve paying attention to the judge.

“How about we get done with this hearing today itself, eh?”

J. Patel, surprisingly, was not entirely, so to speak, “pissed off”.

He heaved a dejected sigh.

The clerk affected a few clicks. As to how he recorded the sigh, again, I am dumbfounded.

The peon, noticing that his intervention was required with utmost urgency, jerked into action, moving swiftly, to assist a kind gentleman make his way through the door. Mission successfully accomplished, he reverted back to employing his energies into observing other avian species inhabiting the surroundings.

J. Patel, momentarily disturbed by the peon’s enthusiasm, recomposed himself and continued

“Look Counsel, the court’s infrastructure is incredibly stressed. For God’s sake, people have gone mad waiting for their turn.”

The “other parties”, I had referred to were getting increasingly vociferous. While those who yelled at the oblivious peon were more subtle in displaying their impatience, there were others who, so to speak, were more physical in their expression. Just as J. Patel was about to speak, one of the waiting parties found it appropriate to fling a chair clean through the window.

The clicks of the typewriter gave way to silence.

The judge resumed and so did the clickety clacks of the typewriter.

“Maybe this will help you understand. Let me tell you what happens when we grant such applications. First and foremost, we have to set aside all other matters. Next, your hearing will take a good part of the day and then my staff and I have to draft the judgment late into the night.”

Counsel responded with an affirmative nod.

J. Patel, heaving a sigh of relief and leaning back asked

“So, we are doing this today, Eh?” cut in the Counsel with an unmistakable air of mirth.

At this point in time, it would be a bit of an understatement if I said J. Patel was furious.

“On what exotic animal do you think have I been blabbering about all this while? Firstly, you did not file the Notice of Motion and next, failed to file this under the commercial division. Yet, you have the audacity to demand to be heard at the cost of all others?”

The “other parties” fell into an incongruous silence.

Even the peon started paying attention.

“Why don’t we wrap it up today?” quizzed the Counsel coolly.

The judge banged his fist onto the table.

J.Patel recomposed himself and replied

“Alright then, I will start the hearing at 5PM, as I can deal with others till then. I will sit through the freaking night, until this gets over. But God forbid, if…”

Counsel, with a cheery ring to his voice , butted in

J. Patel’s eyes bulged. He took a few minutes to settle down and continued to speak in a relaxed, but chilling fashion. The most apt comparison of his speech style in popular culture would be to Anthony Hopkin’s Hannibal from Silence of the Lambs.

Just to be overly cautious, let me clarify once again that I haven’t, in actuality, got the slightest clue with regards to J. G.S. Patel’s speech tone or other attributes essential for writing this piece.

Let us do it your way then.

I will start hearing arguments right away.

You have deliberately come to the court in the last minute in an attempt to hurry us into passing a hurried decision, without duly considering all merits. If you wish to gamble like this, you will have to face the consequences as well.

God forbid, if I finally decide against you, I will make sure that you pay for it.”

The decision was finally held against the Plaintiffs and they were ordered to pay 5 Lakhs as penalty. Also, J. Patel refused to place a deadline for the Defendants to file an Affidavit in Reply. The order allowed them to take as long as they wished. I felt this was a tad bit harsh, as there could be certain legitimate claims of the Plaintiffs which were not taken into account or addressed at the prima facie stage.

Image from here, here and here.