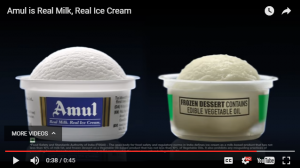 As reported by Livemint, Hindustan Unilever Limited (HUL), and Vadilal have taken Gujarat Cooperative Milk Marketing Federation Limited (GCMMF) to  Court, claiming that this Amul advertisement by GCMMF constitutes disparagement. Since the only case pending (SL/204/2017) between the two parties that I could find on the Bombay High Court website doesn’t have any orders uploaded, I am relying on news reports for this post. I would very much appreciate it if our readers could direct me to an order passed in this case, if any.

As is relevant to this dispute, the Food Safety and Standards Authority of India (FSSAI) has mandated that ice cream made with vegetable oil is to be labelled a ‘frozen dessert’, while only those products that contain milk fat can be called ‘ice cream’. HUL, the manufacturers of Kwality Walls ice cream, released a statement that called Amul’s advertisement misleading, as it made “factually incorrect statements”, and “created apprehensions” among the consumers of frozen desserts. Further, HUL clarified that Kwality Walls ‘frozen dessert’ products did not contain Vanaspati. The only difference between ice creams and frozen desserts, they pointed out – is that “frozen desserts use vegetable fat instead of dairy fat, which actually makes them healthier as they have lower saturated fat and do not have cholesterol”. Amul reportedly issued another statement, stating that frozen dessert companies were misleading consumers by using low cost ingredients, and that they were attempting to make consumers aware of the difference.

The essence of this controversy is the implication of ‘frozen desserts’ being made with Vanaspati oil, as is being referred to in the advertisement. While HUL accepts that they use vegetable fat, it is the negative implication that the use of the word ‘Vanaspati’ will have on their sales, that is said to constitute disparagement in this present case. While the advertisement in question does not mention Amul’s competitors by name, HUL has reportedly argued that it is not necessary for the name of the brand to be explicitly mentioned for there to be a case of disparagement. A proposal put forward by HUL was that a voiceover (‘vanaspati tel yaani vegetable oil’) be edited into the advertisement to clarify that it was vegetable oil that was being referred to and not Vanaspati. As per these news reports, GCMMF then contended that the onus lies on HUL to prove that consumers will be misled by the words ‘vanaspati tel’ in the advertisement.

As I had summarised in a post last month, disparagement with regard to trademarks is essentially the dishonest use of a trademark in advertisements. Section 29(8) of the Trademark Act (“Act”) provides for an action of infringement to lie in case an advertisement containing a registered mark: (a) takes unfair advantage of, and is contrary to honest practices in industrial and commercial matters; or (b) is detrimental to its distinctive character; or (c) is against the reputation of the mark. While it will fall to the determination of the Court whether this Section is applicable in the present matter, the focal point of determination is whether the advertisement can be said to have been of a registered mark; and consequentially whether the advertisement attracts any of the three conditions mentioned above.

In Hindustan Unilever Limited v. Reckitt Benckiser India Limited, the Delhi High Court in 2014 held that in order to determine whether a statement disparages or defames, the question must be considered from the viewpoint of the general public, and not with regard to a special class of people. Colgate Palmolive Ltd. v. Hindustan Unilever Ltd. was a 2013 decision of the Delhi High Court inter alia observed that the advertisement had to be viewed as a whole, and not analyzed like the provisions of a statute.

Standards to be determined for a claim of comparative advertising have been widely interpreted by Courts. We have blogged widely on the issue in the past, please read here for our posts. In 2013, The Delhi High Court in Reckitt Benckiser v. Hindustan Lever Limited listed out a few essential principles of the law on disparagement, which Anubha has listed as follows:

Further, in order to satisfy the test of comparative disparagement, the plaintiff has to establish: (a) A false or misleading statement of fact has been made about his product; (b) That the statement is deceiving or has the potential to deceive the substantial segment of prospective consumer and; (c) The deception is likely to influence consumer’s purchasing decisions. The court noted that the manner in which the same is telecasted is of prime importance, the same should not be in the manner to ridicule or condemn the product of the competitor, resulting in disparagement or disrupting them in the market.

The 2015 case of Havells v. Amritanshu noted that the standard to be applied was “whether a reasonable man would take the claim being made as one made seriously”. Additionally, to see if an advertisement is misleading, two essential elements need to be satisfied: First, that the advertisement must deceive the persons to whom it is addressed or at least, must have the potential to deceive them. Secondly, as a consequence of its deceptive nature, the advertising must be likely to affect the economic behaviour of the public to whom it is addressed, or harm a competitor of the advertiser.

This isn’t the first time this issue has cropped up – HUL had dragged Amul to the Advertising Standard Council of India (ASCI) last year, objecting to the distribution of pamphlets on the same issue, but the ASCI had ruled that Amul’s campaign did not disparage frozen dessert. Keeping in mind the above standards as developed by Courts, HUL and Vadilal will have to prove to the satisfaction of the Court that Amul’s advertisement really is misleading, and that it has the potential to deceive the substantial segment of prospective consumers. We hope that orders in this suit will soon be available on the High Court website, and promise to bring you any further updates in this case!