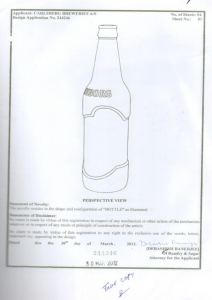 In a judgment running into 119 pages, Justice Vipin Sanghi of the Delhi High Court has declined to grant Carlsberg an interim injunction in a composite lawsuit filed for design infringement and passing off against Som Distilleries, the manufacturers of ‘Hunter’ beer. The winning side was represented by Senior Advocate Pratibha Singh, briefed by Kapil Wadhwa.

Apart from denying an interim injunction, Justice Sanghi has referred a question of law to the Chief Justice on the grounds that the judgment in Micolube India, decided by a three judge bench of the Delhi High Court, may have been decided per incuriam, which is polite Latin for saying that the judges got it completely wrong.

The issue of maintainability of the composite lawsuit was raised by the defendants on the grounds that the Micolube judgment, also known as the Mohan Lal judgment, had held that that a suit for design infringement action could not be combined with a suit for passing off. In support of this proposition, the Micolube court had cited to the Supreme Court judgment in the Dabur India Ltd. v. K.R. Industries. The plaintiff’s lawyers, Senior Advocate Sudhir Chandra Agarwal (the grand old senior advocate of IP), briefed by C.A. Brijesh, argued (bravely) that the Micolube judgment was delivered per incuriam and that the Micolube court had wrongly interpreted the Dabur India judgment. In that case the Supreme Court had prohibited combining two different ‘cause of actions’ into one lawsuit when the court lacked jurisdiction to entertain one of the two ‘cause of actions’.

For example the jurisdiction clauses apply differently for trademarks and passing off because in the former case the plaintiff can sue at the place of his business, while in the latter case, the plaintiff can sue only where the defendant resides or where the cause of action arises. In such lawsuits, depending on the facts, the same court may lack the jurisdiction to hear the trademark infringement claim and the passing off claim and hence both cannot be combined into one lawsuit. More pertinently as pointed out by Justice Sanghi, the Micolube court appears to have missed Order II Rule 3 of the Code of Civil Procedure (CPC) which clearly allows for combining different causes of action. It states in pertinent part:

How a bench of three judges missed this provision and misinterpreted Dabur India is beyond me, especially since the bench was constituted specially to hear three specific issues, including the maintainability of composite lawsuits. It now remains to be seen whether the Chief Justice of the Delhi High Court will actually constitute a larger bench to reconsider this case – I think Justice Sanghi has made out a strong case for reconsidering the judgment in Micolube.

The statement of novelty – Does it really count?

The interim injunction was denied by Justice Sanghi on the grounds that the design was prima facie not novel and that there was no infringement.

In order to understand the judge’s analysis of the novelty issue, it is necessary to have a look at the registered design reproduced from pages 110 of the judgment. Unlike American design patents, where the novel features of the design are laid out in claims, the Design Certificate issued by the Patents & Designs Office carries only representational images of the design along with a statement of novelty. In this case the statement of novelty for registered design 244246 read as follows: “The novelty resides in the shape and configuration of “BOTTLE” as illustrated.” As you can see from the images, the bottle has certain special grooves and indentations.

Questioning whether the registered design is novel, Justice Sanghi concludes:

“The plaintiff has not claimed novelty and appeal to the eye in respect of any peculiar feature of its bottle registration. The whole bottle has been got registered as a design, and the shape of the bottle as a whole, undoubtedly, exists in the prior art.” (“emphasis supplied”)

In other words, Justice Sanghi has used the ‘statement of novelty’ to interpret the features actually claimed by the plaintiff. Meaning, if the plaintiff, had specifically claimed the specific grooves and indentations outlined in the pictures they may have stood a better chance. The fatal flaw in their case thus was the bland “statement of novelty” where they claimed the ‘shape and configuration’ of the entire bottle.

“Statement of novelty. – The applicant may, and shall, if required by the Controller in any case so to do, endorse on the application and each of the representation a brief statement of the novelty he claims for his design.

Functional designs – can they be protected?

One of the issues that popped up in the case is whether a design can be protected if it is functional. The issue came up because the indentations and grooves served the function of holding the label of the brand.

On this question of law, Justice Sanghi came to the following abrupt conclusion:

“Normally, designs which are purely functional cannot be protected or form the basis for an action for infringement. A functional shape and configuration, which is dictated solely by the functionality, is not registerable under the Design Act as a design. The learned Judge referred to the observation of Lord Reid, J. in Amp. Inc. Vs. Utilux Pty. Ltd. 1972 RPC 103 wherein the learned Lord observed, “……….and the words ‘judged solely by the eye’ must be intended to exclude cases where a customer might choose an article of that shape not because he thought that the shape made it more useful to him”.

As far as I’m aware, there is actually no such prohibition in the Designs Act against the protection of designs that are functional. Both the Copyright Act and the Trade Marks Act have specific provisions prohibiting the protecting of articles that are functional or technical in nature. If Parliament wanted to prohibit the tangential protection offered to functionality under design law, it would have crafted a similar prohibition under Indian design law. Can the court then fall back on an English judgment that was delivered almost 30 years prior to the enactment of India’s Design Act? I would think, no. It is certainly not an ideal situation but overlaps in IP are inevitable and a source of considerable profit for IP lawyers.