I write to bring you an analysis of a Bombay HC Justice Patel Order that discusses passing off and design infringement in a mind-bogglingly interesting context… two water bottles.

While being incredibly clear at times, the Order was equally ambiguous at places. I shall point these “ambiguities” out over the course of this piece and would be incredibly grateful if readers could shed some light.

All assertions of law I make in this piece have been sourced from Venkateswaran on TMs & PO.

There existed two bottles in the market.

Cello was granted registration in the design in 2016. 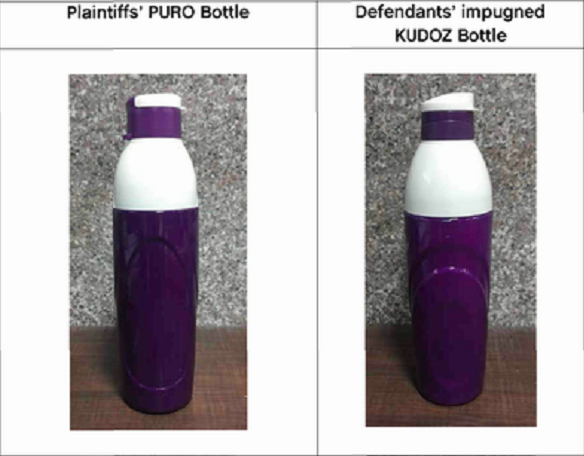 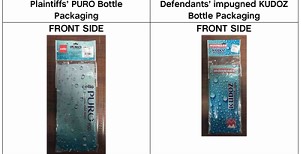 We will deal with each of these claims in the next section.

The Order was passed in Cello’s favour.

There exists a common law relief against passing off.

Passing off is the act of making a representation that induces customers to believe that a product originates from a particular manufacturer, without it actually originating from that manufacturer.

The rationale of preventing passing off is two-fold:

For determining whether passing off had occurred, J. Patel used a well-established test called the “classical trinity”:

Before we check for fulfillment of each of the above conditions, let us have a look at the excerpt (from J. Patel’s Order) that laid down the test:

“11. Slightly different considerations arise when assessing the claim in passing off. Here, as in any passing off action, a plaintiff must satisfy all three probanda of the so-called Classical Trinity: (i) reputation and goodwill in the goods; (ii) misrepresentation by the Defendants; and (iii) damage. This posits that similarity is demonstrated to begin with; that done, the question then is not so much whether it is confusing, but whether it is calculated to deceive. Passing off is an action in deceit; the deceit lies in the misrepresentation; and the misrepresentation must be as to source, i.e., to deceive the average consumer into believing the defendant’s product is the plaintiff’s. There need not be fraud, and intention is irrelevant. … that there must be some prima facie evidence of misrepresentation, this not being a presumption. That material can come in different forms, and one of this might be to show the extent of copying and its exactitude, or to show that elements other than those in which protection is claimed have also been copied.”

The Order’s usage of words like “deceit”, “calculated to deceive”, “action in deceit” notwithstanding, please note the well-established principle that intention (in passing off) is irrelevant. We will discuss this in greater detail when we analyze the prong of analysis relating to “misrepresentation”.

Now, let us see if the conditions were fulfilled in J. Patel’s eyes.

Here is the relevant excerpt for the first prong of analysis (reputation).

But the law on passing off requires that a reputation be established as to source, i.e., as to the Plaintiffs. This might be little more difficult where the manufacturer is a new entrant in the market. Cello is not. The reputation of the Cello house mark is already such that the Plaintiffs are an established name in direct relation to that mark. The question is not of identification of the brand, i.e., PURO and the Plaintiffs do not suggest that people necessarily buy a bottle by this name. What they do suggest is that people tend to prefer bottles with the CELLO mark, i.e., as identified as coming from the Plaintiffs’ house or source; within that range of choice of Cello’s products, this particular bottle has achieved a great deal of commercial renown. The question of establishing reputation for the purposes of passing off by identifying the product and its origin or source is thus answered.

I felt J. Patel could have been a lot more articulate here.

The standard for testing goodwill is breached if consumers identify the product with a source, which in fact, is the plaintiff. In other words, whether the public knows the identity of the source entity or not is of little significance. But what is required is that consumers recognize the product as belonging to a single source, whose identity they might not know.

Inarticulateness aside, I find the reasoning contentious too.

Simply put, passing off would have occurred if Modware sold its product as if it were Cello’s.

For that to happen, consumers will firstly have to attribute the product to one source.

I fail to see how popularity of a particular design (based on sales) points towards consumers attributing the product’s design to a particular source. I could understand the basis for such a line of reasoning if Cello had used the impugned design on all of its products. But that is not the case. Therefore, if consumers do not think of the product as belonging to Cello in the first place, how can the court deduce that consumers might get confused and start buying Modware’s product thinking it originates from Cello?

But yes, I accept that the line is not so clear. The distinction between goodwill in a product and goodwill in a source might not be all that wide as I make it out to be.

The question basically boils down to this:

Suppose that a manufacturer Alpha, produces a product Z.

If Z’s sales explode, would you directly assume that consumers have been buying Z because of Alpha and not the distinct qualities of Z? If other manufacturers start producing Z, would you provide Alpha relief under passing off, even if consumers do not want Alpha’s Z, but are fine with any Z like product?

Anyway, the court held that goodwill did exist and moved on to the next prong of analysis.

The following excerpt is relevant for understanding J. Patel’s take on misrepresentation:

“38. This takes us to the second requirement of showing misrepresentation, and there, I
imagine this must be a case of res ipsa loquitur. I can think of no tenable explanation for Modware to have adopted a shape, configuration and ornamentation so very nearly identical to that of Cello. Showing other bottles of the same height or girth does not take Modware the required distance. There is no explanation for the indistinguishable colours either, i.e., the exact same two-tone colour combination used by Cello. Modware did not take merely a two-tone scheme but with different colours. Modware took exactly Cello’s colours and colour combinations. This is true too of the packaging that Modware chose, and here again between the blue colour, the droplets of water and so on, the one is indistinguishable from the other.

39. What does this tell us? Everything points but in one direction that Modware was attempting to deceive consumers into believing that its products came from the house of Cello. This is, therefore, prima facie, an attempt calculated to deceive and the deception and misrepresentation is as to source or origin. These are the necessary requirements that must be met in a cause of action in passing off.”

If intention is irrelevant in a claim of passing off, I don’t see how J. Patel’s analysis above of misrepresentation seems to suggest so. If you read the highlighted portions, you will assume that if an explanation had been provided, Modware would have been let off the hook. Though this was inconsequential to the final conclusion, it is unnecessarily confusing.

All J. Patel had to hold was that the two products were so similar that they were likely to cause confusion in the minds of consumers. The fact of possibility of confusion is the only relevant factor.

Finally, the third prong of analysis (likelihood of damage) was also deemed to have been fulfilled.

So, relief was granted, on account of concluding, prima facie, that passing off had occurred.

Modware’s counsel’s initial argument was to suggest that a “Bottle is a bottle” and therefore, there couldn’t really be any protection for Cello’s bottle design. J. Patel, rightly so, summarily set aside this argument by holding that such an understanding of design law was overly reductionist.

Next, counsel sought to invalidate Cello’s protection under design law by arguing that the design was a result of a combination of earlier known designs (invalid under S.4(c) read with S. 22(2) of Designs Act).

Counsel attempted to establish that Cello’s design was a combination of earlier known designs by splitting the impugned design into sub-parts and putting forth, as evidence, earlier designs of bottles that incorporated each of these sub-parts.

J. Patel chose not to go into such an intricate analysis, and held that none of the prior designs brought to his notice, on the whole, were similar to Modware’s product, while Modware’s product was almost identical to Cello’s product. Therefore, it was held that, prima facie, Cello’s design was sufficiently original and that Modware’s product infringed upon it.

Venkateswaran on Trade Marks & Passing Off, The Order.