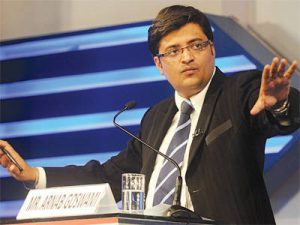 In an update to the Bennet Coleman (Times now)- Arnab Goswami Legal battle raging on at Delhi High Court, Arnab can continue using the phrase ‘the nations wants to know’ till the Court passes the final judgment in the case, according to its recent order.

‘The Nation Wants To Know’ Controversy

As previously covered by Prof. Shamnad here and analyzed here, Bennet Coleman had filed a suit seeking a permanent injunction against Arnab Goswami, citing trademark infringement and passing off. It claimed to have the ownership of the IP rights in the phrases ‘ the nation wants to know’ and ‘the Newshour’, which Arnab was using while running his new channel ‘Republic’, thus infringing on the former’s rights.

The three claims previously examined are Times now’s claims of violation of the employment agreement between Bennet Coleman and Goswami by the latter, trademark infringement, and passing off.

Goswami, changing his strategy, had begun using a modified version: ‘The nation still wants to know’, instead of his old catchphrase, possibly circumventing this claim of breach of contract. Whether the IP protection (if) awarded to this phrase stretches to this variant, or if this can let Arnab off the hook is something that requires a deeper analysis. However, to trap Goswami for a breach of contract, it must be established that this phrase is worthy of IP protection, which might not be cakewalk. As noted by Prof. Basheer, it is a well known principle that common expressions cannot be monopolized by a party and thus, for IP protection to be awarded to this phrase, it must cross a very high threshold. This will become impossible in the absence of ‘uniqueness’ and ‘exceptional distinctiveness’ of a phrase, which has been often used in common parlance, such as in this case.

As previously noted here, even if we assume that the phrase warrants IP protection, this claim will possibly fail as Times Now does not have a registered trademark in the considered phrases. It has only filed an application for the same. In the absence of a registered trademark, the only possible claim is that of ‘passing off’

As analyzed here, this claim requires the fulfillment of a ‘key test’: the public perception. Will the public at large be confused by the use of this phrase by someone other than the proprietor? Goswami could very well argue that the public associates the catchphrase almost exclusively with him, and not Times Now, thus possibly nullifying any claim of such ‘confusion’.

The order of the DHC on 5th July 2017 restrained both the channels from reporting on this matter/ publishing about it, while ordering Republic to file a statement in the next thirty days. The relevant extract(s) state-

“Mr. Debarshi Dutta, learned counsel…prays for and is permitted to file a written statement and reply to the applications within a period of four weeks.” And

“This Court directs that till the present suit is pending, none of the parties to the suit shall report or publish any news with regard to it except reproducing the Court order.”

Since no interim order was pressed for by Bennet Coleman, as stated in the following paragraph-

“Mr. Rajiv Nayar, learned senior counsel for plaintiff states that he does not wish to press for any interim order at this stage.”;

Republic TV remains free to use the phrase till the final order is passed.

Also, in the words of Justice Manmohan-

“Competition and bitterness between the parties is evident. As such, whether passing off (someone else’s phrase as one’s own) had occurred or is occurring at all, is questionable”.

Till then, the nation can possibly still want to know. The next hearing is scheduled to be on 31st August, 2017.