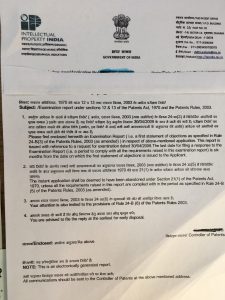 The Indian Patent Office has made some interesting procedural changes recently.

In a first, it appears that the Indian Patent Office is now issuing official communication bilingually in both English and Hindi. A public post by the Joint Controller of Patents and Designs at the IPO captures one such bilingual First Examination Report (which is the report issued to patent applicants in response to a request for examination).

The objective behind this is a little difficult to grasp – as per the manual of the patent office, patent applications and requests for examination may already be filed in either Hindi or English. Typically, the response to the same by the IPO should be in the language of the application. Further, while the use of local languages and vernaculars is a positive step, it also remains to be seen if similar bilingual communication is issued by the IPO in states where Hindi is not the primary vernacular. Given that the IPO is a central government body that is responsible to citizens of all states (and languages), this effort should be expanded towards making the patent system accessible to people in different languages, possibly starting with officially recognized languages in India. There are four patent offices in India, and, besides the one in New Delhi, it is difficult to make a case for the ones in either Kolkata, Mumbai and Chennai. Tamil Nadu, in particular, has recently seen protests and agitations surrounding the use of Hindi for official communication. The issue, therefore, is not one which should be lightly brushed aside by the Indian Patent Office.

In another development, the Patent Office has now automated the process for generating and issuing Patent Certificates. As per a public notice dated July 3, 2017, the Patent Office has directed that Patent Certificates “will be transmitted to the applicant concerned or his authorised patent agent on record on his email address recorded with this office and shall also be made available on the official website (www.ipindia.gov.in) along with status of the application concerned. The Patent Certificate made available on the website may be downloaded and printed as desired.” This move will help in reducing the time taken for processing patent applications, an issue which continues to plague the Indian patent eco-system.

Small innovations like these to improve upon patent procedure are important for a more inclusive and less cumbersome patents system. However, they must be well thought out and effectively implemented if their stated aims of greater inclusivity and ease of doing business are to be achieved.