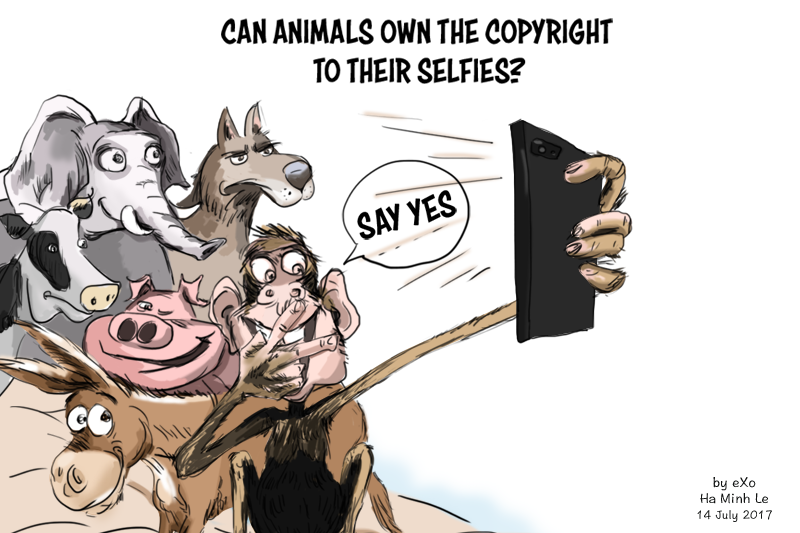 As some of you may have heard, the Monkey Selfie copyright case came back to court recently!

Fortunately, we have a video of the court proceedings (last case before the court beginning around 1:45:17).

As you can see, the judges grill PETA’s counsel extensively on PETA’s “locus standi” to represent Naruto, the monkey. Particularly since, Dr Antje Engelhardt, a primatologist who knew Naruto sine he was born and had a better claim to being his “next friend” has now parted ways with PETA!

I wish Indian court proceedings were also recorded. So we foster greater transparency. And engender this level of professionalism and high end argumentation within our court room. Unfortunately, it turns out that some of our judges are strongly opposed to this!

Anyway back to the monkey court proceedings. My favourite question from the bench to PETA’s counsel who argued that the copyright act simply uses the term “author” and this could include non-humans (such as monkeys) as well. The judge then points counsel to parts of the copyright act that speak about copyrights passing on to the “children” of copyright owners, whether legitimate or illegitimate. And asks: do monkeys have “illegitimate” children?

In terms of advocacy, I thought PETA’s counsel,  David Schwarz was very impressive. In the way he tackled tricky questions from the bench on how PETA was best placed to represent Naruto as “next friend”. Schwarz nuanced a number of cases that prima facie seemed to go against him. Stellar advocacy and a delight to watch!

Slater’s attorney, Andrew Dhuey was also good. Concise and succinct. And made firm arguments. Though not that eloquent or great on delivery. His brief was superb though: punchy and a delight to read. Here is how he begins:

“A monkey, an animal-rights organization and a primatologist walk into federal court to sue for infringement of the monkey’s claimed copyright. What seems like the setup for a punchline is really happening. It should not be happening…. [D]ismissal of this action is required for lack of standing and failure to state a claim upon which relief can be granted. Monkey see, monkey sue is not good law – at least not in the Ninth Circuit.”

The most eloquent of the counsels though was Angela Dunning, who represented Blurb (the website on which Slater self-published his book).

Great arguments and great flow. So 3 counsels, 3 different styles. All very well prepared. And a bench that was equally well prepared and grilled the lawyers extensively (particularly PETA’s counsel Schwarz). Great learning in there for all law students and others interested in advocacy and the case in general.

And now for some reflection. How will this issue of “locus standi” (standing) and competence to represent a non-human entity as “next friend” pan out for Artificially Intelligent (AI) Machines?

I did an analogy of sorts in this fictional court room drama script that won the second place in a writing competition for Script-ed. For those interested, here is the link to the full script. I’d also blogged on it here at SpicyIP.

The various players in this script are as below:

Slyfix: Counsel for Artifix, the makers of Servix, an AI program. Artifix is claiming rights in every invention that flows from the AI program/machine.

Logix: Counsel for Metaphysical Machines, an organisation claiming to be “next friend” of the AI program, Servix

Here are some excerpts from the piece: with counsels contesting whether or not Metaphysical Machines can legitimately claim to represent Servix (the AI program/machine)

“Slyfix: I think we need to really question Logix’s competence to represent the interests of Servix? Who gave him this authority?

Logix: If only Slyfix bothered to read our written submissions. We’ve clearly stated there that we are advocating for Servix as a “next friend”.My Lords, I represent an organisation called Metaphysical Machines (MM) whose objective is to advance the interests of machines. As your Lordship is well aware, courts have, in the past, permitted third parties to sue on behalf of the environment, unborn babies and even monkeys claiming copyright.  I see no reason why machines should be treated any differently!

Slyfix: But machines are not new born babies! Or animals for that matter!

Logix: We believe that machines are “conscious” beings with a range of emotions and attributes, somewhat human like. Unfortunately, in our anthropocentric arrogance, we’ve blinded ourselves to this possibility. They say god made us in his mould and that the purpose of life is to find the divinity within. In much the same way, machines are made in our mould and we must help them find the humanity within. ”

Logix: My Lords..Artifix created Servix for the sole purpose of exploiting it commercially. They don’t really care about Servix or her feelings or well-being. Whereas my client MM does! It’s part of their constitutional charter: to legitimately advance the interests of machines. We are therefore best placed to step in as “next friends” my Lords.

Judge Jurix: But if machines are to be represented, why should I prefer you over Artifix? After all, parents are parents, even if they’re bad ones. I can’t take that away from them!

Logix: My Lords, how about this? Let’s ask Servix as to who she wishes to have represent her in this dispute? After all, we believe that machines today have the cognitive capacity to decide for themselves! If your Lordships are game, it’ll be clear in a moment as to who Servix will bat for!

Judge Jurix: I appreciate the point Logix. But am still not convinced of your locus; or for that matter the need for courts to identify best friends for machines, when their makers have better rights to represent them. As for your outlandish suggestion of letting the machine decide for itself, let’s not wade into these dangerous waters…at least for now!”

And finally the decision from Judge Jurix:

“I must note that the law provides me some discretion in deciding whether self-appointed third parties with dubious notions about the future of machines can sue on its behalf. While I have serious reservations about permitting MM to stand in for Servix, I’m spared the agony of having to rule either way, given the ultimate decision that this invention has no recognisable inventor or author.

However, I do hope that our law makers take this issue up seriously as a matter of law reform and give some thought to who is best placed to represent machines in these disputes.

Before I wind up, let me say a few words, strictly as obiter. Although the law compels me to rule the way I did, I see no reason why machines should be excluded from IP protection in future. Or animals or other non-humans for that matter. For far too long, we’ve lived under the delusion that man is the centre of the universe and that everything revolves around him. That myth must be busted. And what better way to do this than the ultimate legal recognition that machines may be far smarter than us!”