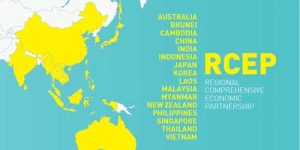 Last week, 16 Asia-Pacific countries concluded yet another round of negotiations on the Regional Comprehensive Economic Partnership (RCEP). Billed as one of the biggest regional free trade agreements, RCEP is expected to bring together the ten countries that form ASEAN along with Australia, China, India, Japan, South Korea and New Zealand. These countries account for nearly 50% of the global population and 30% of global GDP.

As expected, there were several protests in Hyderabad by NGOs and civil society although going by the media coverage, these protests appear to be quite minor. Most of the newspapers appear to have covered the protests only in the city editions of national newspapers or in the business sections of the national newspapers. Of course, with the mob lynchings and migratory politicians, I am not surprised that the papers aren’t covering the talks in more detail.

The most vocal protests on the streets and in the opinion columns are on the IP aspects of RCEP. Going by the leaked texts of the negotiations, it appears that the Japanese and Korean negotiators are trying to replicating in the RCEP several provisions of the failed Trans-Pacific Partnership (TPP). These include provisions on patent term extensions, data exclusivity for pharmaceuticals, statutory damages for copyright infringement, extended terms of protection for broadcasting rights, investor-state dispute provisions etc. You can read more about the criticisms of these various measures in the following columns by Prof. Feroz Ali, Prof. Arul Scaria & Anubha Sinha and Tahir Amin of I-MAK.

Viewed purely from the perspective of IP, most trade deals will appear to be one-sided for Indians. However it should be remembered that IP is usually one aspect of a trade deal. The other aspects of these deals include greater access to foreign markets for Indian goods and services. Just as India wants greater access to foreign markets for its most competitive goods and services, so do other countries want access to the Indian market for their most valuable exports – which for developed countries is usually intellectual property.

At the time the WTO Agreement was being concluded in the nineties, the soothsayers warned that it would be the end of the Indian economy and that domestic industry and agriculture would perish. When Pranab Mukherjee signed the WTO Agreement as India’s commerce minister in 1994, he made it clear that India had agreed to TRIPS because of the promise of greater access for Indian textiles in foreign markets. Research shows that there has been a massive growth in the Indian textile industry post the WTO Agreement – it is one of the largest employers within the country and has helped lift the living standards of millions.

On the other hand, have the increased IP standards brought in by TRIPS affecting access to medicines? I think it is fair to accept that patented cancer medication has definitely become more expensive due to patent monopolies brought in by TRIPS but several patentees like Gilead and Merck have introduced differential prices for their patented medication to treat hepatitis and diabetes. Even in the field of cancer, GSK and Roche brought down the prices for their cancer medicines like Tykerb and Herceptin for the Indian market.

Now, how do we judge the overall impact of the WTO Agreement? I suspect that most economists would certify that the net welfare benefits of the WTO agreement are positive because of the huge benefits to the textile industry.

Similarly, while debating RCEP, I think it is necessary to understand the trade-offs between the demands being made by Japan and Korea before deciding on the demands being made for increased IP protection. Unfortunately, this government like most past governments isn’t quite transparent on its negotiation position during the trade talks. While I understand that the government can’t place all of its cards on the table during an ongoing negotiations it has to share atleast the broad contours of its bottom line. India is still a democracy after all.

This brings us to the issue of transparency in trade talks. The Congress government headed by Prime Minister PV Narasimha Rao was notorious for zero transparency during the WTO negotiations. I cover the issue in some detail in my book on Indian IP history. The government of the day deflected all questions, raised in Parliament, on the negotiations and never sought a vote before signing the final WTO Agreement at Marrakesh in 1994. The only ray of hope during those times was a Parliamentary Standing Committee headed by I.K. Gujral (who would become the Indian Prime Minister a few years later).

Till the early nineties, Parliamentary Standing Committees were an ad-hoc affair that required a vote from each House of Parliament. Since India has always been a country where both Parliament and the Executive are controlled by the same political party, it was rare for a committee to be formed if the ruling party wanted to put a lid on an issue. However in the nineties, the Indian Parliament decided to replicate the British system of having permanent standing committees to oversee the functioning of all the ministries and departments of government. Since these committees had a somewhat permanent nature and considerable power to set their own agenda, it was possible for them to investigate issues without the blessings of the political party in power.

Gujral at the time was heading the Department Related Parliamentary Standing Committee on Commerce. This committee decided to take up for study the issue of the ongoing WTO negotiations and summoned for a hearing several high ranking government bureaucrats and also heard several NGOs opposing the WTO agreement. The committee’s final report is perhaps the only publicly available official state document that records the position of the Indian government during the WTO negotiations.

There is no reason that this exercise cannot be repeated once again in context of RCEP. The government bureaucracy has no choice but to appear before Parliamentary standing committee or risk being hauled up for contempt of Parliament.