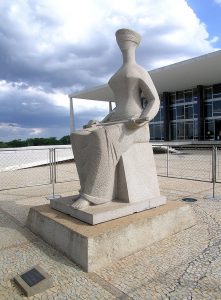 A Justiça by Alfredo Ceschiatti. Seated, blindfolded woman with a sword. This signifies fairness and the power to achieve it. This statue is located in front of the headquarters of the Supreme Court of Brazil Image from Wikipedia

As Pankhuri informed us yesterday, it is virtually certain that Justice Manmohan Singh who retired from the Delhi High Court, will be the next chairperson of the Intellectual Property Appellate Board (IPAB). His appointment has been made under the Tribunal, Appellate and other Authorities (Qualifications, Experience and other conditions of Service of Members) Rules, 2017 which derives its authority from the Finance Act, 2017. As reported earlier, the constitutionality of these rules and the relevant provisions of the Finance Act, 2017 have been challenged before multiple High Courts and the Supreme Court.

With regard to the appointment of the Chairperson of the IPAB, the rules prescribe a selection committee consisting of the Chief Justice of India or his nominee, two Secretaries to the government of India and two experts nominated by the Central Government. In other words, this committee is packed with members of the government with the judiciary having only nominal representation on the committee. Such a setup is in complete violation of the criteria laid down in Shamnad Basheer v. Union of India. Referring to Supreme Court judgments mandating judicial independence of tribunals, the court held the following:

“As the Constitution of the Committee, as referred above, is obviously loaded in favour of Executive, which is impermissible in law, as held by the Supreme Court in the judgments referred above, the then Chairman of IPAB raised an issue about the role assigned in the selection process. However, it was decided to stick on to the very same procedure notwithstanding the decision rendered in Union of India Vs. R.Gandhi, President, Madras Bar Association, ((2011) 10 SCC 1) with a justification that it does not have any bearing on the present case. Resultantly the selection process has been left entirely to the Executive, though the functions of the Tribunal are judicial. This act is a direct affront to the basic structure, which is fundamental to the Constitution of India. The 1st respondent has totally overstepped and acted in disregard to the law laid down by the Supreme Court in Union of India Vs. R.Gandhi, President, Madras Bar Association, ((2011) 10 SCC 1) by turning a blind eye. The directions issued therein are meant to be applicable to all the Tribunals.”

Similarly, on the point of referring decisions of the Selection Committee to the Appointment Committee of the Cabinet (ACC) for confirmation, the Madras High Court was very clear that the practice was unconstitutional. This is relevant because the “Information Note” discovered by Pankhuri, clearly states that the decision to appoint Manmohan Singh was confirmed by the ACC. The text of this note is as follows:

“The Appointments Committee of the Cabinet (ACC) has approved the proposal appointment of Justice (Retd.) Manmohan Singh, Chairman, Appellate Tribunal for Forfeited Property to the post of Chairman, Intellectual Property Appellate Board (IPAB) in the scale of pay as prescribed in the Tribunal, Appellate Tribunals and other Authorities (Qualifications, Experience and other Conditions of Service of Members) Rules, 2017, for a period of three years w.e.f. the date of assumption of charge of the post, or until further orders, whichever is earlier.”

This issue of referring appointments to the ACC was addressed by the Madras High Court in Shamnad Basheer v. Union of India. In pertinent part, the Supreme Court held the following:

“However, we have no hesitation in holding that the view of the Chief Justice of India on the choice of selection to the post of Chairman should be given due weightage. Thus, we hold that the procedure adopted in seeking ”approval” by the appointment committee of Cabinet is illegal.”

One last issue, which although not touched upon by the Madras High Court, is the following sentence from the information note stating that Justice Singh’s appointment shall be “for a period of three years w.e.f. the date of assumption of charge of the post, or until further orders, whichever is earlier.” (emphasis mine) Does the ACC think it can dismiss Justice Singh whenever it feels like? The rules under which his appointment is made allows him a three-year term or retirement at the age of 67 years, whichever comes earlier. Why then does the government use the words “until further orders”?

It would be beneath the dignity of a retired Justice to accept appointment under such a vague order which has been issued in violation of a judgment of another High Court.