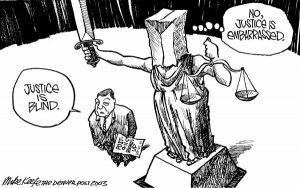 On June 1, 2017 the Department of Revenue, Ministry of Finance notified in the Gazette of India, the Tribunal, Appellate Tribunal and other Authorities (Qualifications, Experience and other Conditions of Service of Members) Rules, 2017. These rules were notified under Section 184 of the Finance Act, 2017. It is usually the practice of the Central Government to publish a draft of statutory rules in the Gazette and invite comments from the public before notifying such rules into the law. However given the manner of this government’s functioning, it should surprise nobody that the rules were directly notified into law without any invitation for comments from the public.

We’ve covered the noxious provisions of the Finance Act in various posts available over here & here, written by ‘Balkhuri’ and one by me. To briefly summarize the concern with the Finance Act, 2017 – the legislation amended 19 existing laws to open the doors for present government to usurp wide-ranging powers pertaining to the appointment and removal of judges to 19 tribunals. Included in this list is the Intellectual Property Appellate Board (IPAB), which apart from its regular functions under the Patents Act and Trade Marks Act has also been tasked by the Finance Act, 2017 to take over the erstwhile functions of the Copyright Board (which was abolished by the Finance Act, 2017).

I’ve written a longer piece for Scroll outlining why several provisions of the Tribunal, Appellate Tribunal and other Authorities (Qualifications, Experience and other Conditions of Service of Members) Rules, 2017 will be held to be unconstitutional given past precedents of the Supreme Court and various High Courts, especially the decisions in Shamnad Basheer v. Union of India and SIMCA v. Union of India.

I reproduce a portion of my piece from Scroll below on the issue of appointments to tribunals:

On the subject of appointments, the Supreme Court and several High Courts have made it clear that the selection committee for appointments should be balanced with members from the judiciary and the executive, rather than loaded in favour of the latter. Legislation that has not complied with these rules has been struck down as unconstitutional. For instance, in 2010, a Constitution bench of the Supreme Court, in the case of Madras Bar Association versus Union of India, struck down provisions related to the National Company Law Tribunal because the five-member selection committee had only one member from the judiciary while the rest were from the executive – secretaries from various ministries. At the time, the Supreme Court gave broad directions that the selection committee should have equal numbers from both sides, with the chief justice’s nominee getting a casting vote.

This judgement was followed by the Madras High Court in Shamnad Basheer versus Union of India and South India Music Companies versus Union of India. In both cases, a bench headed by then Chief Justice Sanjay Kishan Kaul (recently elevated to the Supreme Court) struck down selection committees handling appointments to the Intellectual Property Appellate Board and the erstwhile Copyright Board for being packed with bureaucrats from the executive. In the context of the Intellectual Property Appellate Board, the High Court stated:

“…. the selection process has been left entirely to the Executive, though the functions of the Tribunal are judicial. This act is a direct affront to the basic structure, which is fundamental to the Constitution of India. The 1st respondent has totally overstepped and acted in disregard to the law laid down by the Supreme Court in Union of India Vs R Gandhi, President, Madras Bar Association, [(2011) 10 SCC 1] by turning a blind eye. The directions issued therein are meant to be applicable to all the Tribunals. The 1st respondent cannot take a stand that for one enactment they can maintain basic structure by their action and violate through another. The need to protect the independence of judiciary has been dealt with and decided in all the decisions referred supra. It has been consistently held that the judiciary should have a substantial role in the selection. It was also held that the process of appointment should substantially be that of members of judiciary.”

In the context of the Copyright Board, the High Court held:

“We also note that though Sub-rules (2) to (5) of Rule 3 of the Copyright Rules, 2013 speaks about appointment to the post of Chairman with the consultation of Chief Justice of India, the rules are silent qua the procedure for appointment to the members. Thus, an attempt is being made to fill up the same with an executive order. Though we do not find anything wrong in the process, the Committee constituted with the overdose of Executive cannot be sustained in the eye of law.”

The schedule to the Tribunal, Appellate Tribunal and other Authorities (Qualifications, Experience and other Conditions of Service of Members) Rules, 2017 provide for the qualification criteria and composition of the selection committees that will make appointments to these tribunals.

Even more worrying than the appointment criteria is the removal criteria mentioned in the Rules. I reproduce the relevant portion from my Scroll article:

Apart from the appointment criteria, the other factor that strongly influences judicial independence is the power to remove judges from their posts. Judges of High Courts and the Supreme Court can be removed only by a vote of each House of Parliament. When some of the powers of High Courts were shifted to tribunals, similar safeguards were not implemented for the judges manning these tribunals. In most cases, the power to remove judges of tribunals was vested with the government, provided an inquiry was conducted by a Supreme Court judge. For example, Section 10 (2) of the National Green Tribunal Act, 2010 stated: “The Chairperson or Judicial Member shall not be removed from his office except by an order made by the Central Government after an inquiry made by a Judge of the Supreme Court in which such Chairperson or Judicial Member has been informed of the charges against him and given a reasonable opportunity of being heard in respect of those charges”.

This is clearly not the strongest safeguard but the fact that the inquiry function was vested with a Supreme Court judge provided some check on the government’s function.

The new rules, however, vest the power of removal entirely with the Central government. The procedure is as follows: As per Rule 8, a written complaint against any judge on the tribunal is to be scrutinised by the “ministry or department of the government of India” under which the tribunal has been constituted. After a preliminary scrutiny, if the relevant ministry or department is of the opinion that there are reasonable grounds for an inquiry, it shall make a reference to a committee constituted under Rule 7 to conduct an inquiry. The rules are entirely silent on the composition of the committee but once an inquiry is conducted by the committee, it may make a recommendation to the Central government, which may then remove the judge from the tribunal.

The entire scheme laid out in Rules 7 and 8 is absurd beyond belief. To illustrate with an example, if somebody files a complaint against a judge of the National Green Tribunal, a preliminary scrutiny of the complaint will be conducted by the Ministry of Environment – a strange set-up, given that it is the job of the tribunal to hold the Ministry of Environment accountable. The same stands true for most tribunals. The Intellectual Property Appellate Board has the power to strike down decisions of the Patents Office and the Trade Marks Registry, both of which function under the Department of Industrial Policy and Promotion, which will also be the department that scrutinises complaints against judges of the board under Rule 8.

For several years now, the Supreme Court has expressed deep discomfort with this set-up where the “parent ministry” was in charge of providing administrative support to the tribunals that were supposed to review and if necessary strike down the decisions of these ministries. In its decision in 2010, the Constitutional Bench of the Supreme Court stated:

“In India, unfortunately Tribunals have not achieved full independence. The Secretary of the concerned ‘sponsoring department’ sits in the Selection Committee for appointment. When the Tribunals are formed, they are mostly dependant on their sponsoring department for funding, infrastructure and even space for functioning.”

Worried about the clear conflict of interest present in this situation, the Supreme Court recommended that the administration of all tribunals be handled by the Law Ministry.

Given the above position of the Supreme Court on the simpler issue of “administrative support”, there is little doubt that it will adopt a much tougher stance on vesting the power of scrutinising complaints with the “parent ministry” and the power of removal with the Central government, per se.

There are several more concerns with these rules, apart from the ones that I have discussed in this post. Hopefully somebody will challenge the constitutionality of not just these rules but also the Finance Act, 2017.