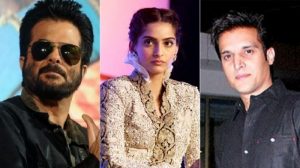 A week ago, Justice Gautam Patel authored a guest post for us. This was quite legendary and one of many firsts:  first sitting judge to write for us, first sitting judge to engage in a thought provoking dialogue on this platform, etc. However, it wasn’t the first time Justice Patel has given us food for thought, or even awed us with his judicial practice. (Our archives are studded with J. Patel’s brilliance, accessible here.) This, also, was nowhere near the last time.

Last month, J. Patel delivered an order on an application for an ad-interim injunction in a claim of passing off concerning the title of a forthcoming film. The case was brought by Anil Kapoor Film Co Pvt. Ltd. against Make My Day Entertainment & Anr, it being Suit (L) no. 319 of 2017. I might also add here, how refreshing it is to study such a well-reasoned interim order quite unlike most these days.

To briefly state the facts:

The plaintiff’s movie titled “Veere Di Wedding” was to star Sonam Kapoor and others. This film has not been made and is still under production. The defendant’s film is one titled “Veere Ki Wedding” starring Jimmy Shergill among others, which has been completed and is apparently slated for release sometime this month.

In March, 2015, the plaintiff registered his script titled “Veere Di Wedding” with the Film Writers’ Association (FWA). The title of his movie was successfully registered with the Indian Film and Television Producers’ Council (IFTPC) by June, 2015. This registration was also renewed successfully – being initially valid only for a year. IFTPC apparently notified the defendant of the plaintiff’s rights in the title, post which the defendant wrote to IFTPC regarding use of the title “Veere Ki Wedding” around March this year. This was when the plaintiff first received knowledge of the making of such a film, although nothing was done of that till May.

The plaintiff also apparently promoted his film through several newspapers and spent amounts of Rs. 50 lakhs, Rs. 65 lakhs, Rs. 45 lakhs and Rs. 25 lakhs on several artists and directors. The other expenditure is not mentioned in the order.

J.Patel’s order begins with admonishing the plaintiff for being unfair to the court and not respecting his denial of circulation of interim applications for the time being. The plaintiff had pleaded urgency and moved under a letters patent leave application, which did not sit well with the judge, as he found there was no real urgency at all.

Moving forward, it was clarified that the application was based on a claim of passing off. This was in view of the Supreme Court decision of Krishika Lulla v. Shyam Vithalrao, which held that there cannot be copyright in a movie title. J. Patel accepted this claim, but also correctly recognized that such a claim can only succeed if the classical trinity of “reputation/goodwill, misrepresentation and damage” is satisfied. The requirement of satisfaction of all these ingredients was outlined as far back as in 1980 in Erven Warnick v. J. Townend(1) , applied in Reckitt & Colman v. Borden(2), and reiterated in notable Indian decisions like Cadila Healthcare v. Cadila Pharmaceuticals and Heinz Italia v. Dabur India, among others.

As for the question of how a “passing off” claim can apply to movie titles – such titles are indicative of a particular brand of a literary work. In Kanungo v. RGV, the court deciding a similar question regarding movie titles, quoted McCarthy on Trademarks & Unfair Competition,

“In general, such titles are protected according to fundamental tenets of trademark and unfair competition law. That is, such titles cannot be used by a junior user in such a way as to create a likelihood of confusion of source, affiliation, sponsorship or connection in the minds of potential buyers.”

The court then went on to clarify that titles of literary works can be of two types – series, and singular works. Titles of works function analogous to trademarks as they indicate that every future edition comes from the same distinctive source. Functioning as a mark that helps consumers distinguish and identify a particular origin of the work, these series titles can be registered as trademarks. The court also noted how the practice of registering such titles as trademarks has become commonplace in India,

The titles of singular literary works are also eligible for similar protection, but with a caveat. These titles should have developed a secondary meaning and acquired consumer recognition.

“Thus, unlike ordinary marks, literary titles of single works which are inherently distinctive are not accorded immediate protection, absent proof of secondary meaning and consumer recognition.”

A notable example of a registered trademark of a singular work is Sholay. This registration helped them win an injunction against the defendants in Sholay Media & Entertainment v. Parag Sanghavi and Ors.

Coming back to this case, the elements of “consumer recognition” and “secondary meaning” were tied to J. Patel’s analysis. Relying squarely on K.M. Multani v. Paramount Talkies and the Privy Council decision of Francis Day & Hunter v. 20th Century Fox, J. Patel held that the plaintiff’s film in this case had not evidenced reputation to satisfy a claim of passing off. Not only was the title (“Veere Di wedding” translating into “My best friend’s wedding”) extremely common, it needed to prove reputation through consumer recognition – i.e. the title should be associated with the public mind as referring only to the plaintiff’s work. According to J. Patel, this was next to impossible in this case because the movie was not even in existence. He noted, “I think it is difficult to conceive of a reputation attaching to a non-existent thing – a film not made or a book not written – no matter how unique the title.”

In the aforementioned case of Kanungo, the Court noted that consumer recognition can be evidenced for an unreleased work as well, but only if proved substantially:

“Even if the work has not been released, a sufficient amount of pre-release publicity of the title may cause a title to acquire recognition sufficient for protection. Relevant evidence … may be inferred as a question of fact include: (1) the length and continuity of use; (2) the extent of advertising and promotion and the amount of money spent; (3) the sales figures on purchases or admissions and the number of people who bought or viewed plaintiff’s work; and (4) the closeness of the geographical and product markets of plaintiff and defendant.”

Even if I were to apply this to J. Patel’s decision, his opinion holds good. The judge held the apparent pre-production expenditure (referenced in the facts above) made by the plaintiff, to be “singularly underwhelming” as evidence. He also noted that the news reports were all third party reports and not part of any active advertising by the plaintiff. This was rightly so and cannot be said to substantially prove consumer recognition enough to justify reputation for a claim of passing off.

The ground of misrepresentation was also struck down by J. Patel. He clarified that just by virtue of having a made a film with a similar title, the defendant cannot be said to have attempted to deceive the public. The two films were completely different (the first one not even having been made yet), starring different actors. Further, he agreed with the arguments of the defendants that the third party news reports had come after the defendant sought registration of his movie title. This ruled out any chance of attempted misrepresentation.

J.Patel emphasized the need to trust the public to understand the difference between these two films. This is the age of information overload, he notes, and as such – deception of the public is tougher, raising the bar for establishment of passing off. Many cases in the past, with similar issues, have placed faith in people’s discretion, including Warner Bros v. Harinder Kohli (the Harry Potter v. Hari Puttar case) or even K. M. Multani.

It is thus clear from J. Patel’s order that it would be difficult for passing off claims to succeed for common place titles, especially those of singular works. The classical trinity would have to be proved – with the bar of reputation being higher for singular works. Alternatively, such titles may either be registered as trademarks under class 41, or may be registered with producers’ associations – although the latter only provides priority of registration. As for the former, trademark registration prescribes a standard of uniqueness that could be fatal for titles that are commonplace. (also refer here and here) This is especially so given the mandate of acquired distinctiveness under section 9 which presumes public use/knowledge of the mark (also see here). In any case, view this in conjunction with the high standard of “consumer recognition” and “secondary meaning” laid down by the courts, and even if you came up with a unique enough title – it would probably be advisable to first actually make your film!