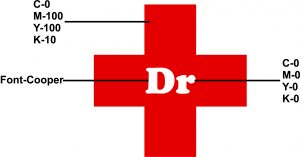 The last time the Red Cross’s red cross emblem (read: red coloured Greek cross on a white background; feeble attempt at a word-pun) became wrapped up in trademark law, it made big news in the US. The company, Johnson & Johnson had sued the American Red Cross over trademark infringement of the famous emblem, and lost. Now, it appears that the emblem is making news within IP circles in India.

According to reports, the Indian Medical Association (IMA) has come up with a new logo to distinguish practitioners of modern medicine. This logo is a red Greek cross, set in a white background, with the letters “Dr” in white, cooper font in the center. Readers may refer to the image on the top left corner of this post.

That the IMA wishes to acquire trademark protection for this logo, is clear from the available press coverage on the matter. However, there is some ambiguity as to whether or not the emblem has already been registered. This ambiguity stems from contradictory information carried by different news reports on the matter.[1] While The Hindu and TOI note that the emblem is yet to be registered, the Indian Express and PTI claim that the emblem has already been registered. I have tried to cross-check this through a search of the e-register – but unfortunately, have had no success. I have also reached out to IMA over email for more details regarding this and will provide an update as soon as I receive a response. Until then, if any of our readers can help with either the application number or any other relevant details regarding this (prospective?) trademark, I’d be very grateful.

Despite the afore-mentioned discrepancy, a combined reading of the available news reports do throw up some important points regarding the intended IP protection for the emblem.

First off – The Hindu, TOI and some other reports mention that the IMA has received an NOC from the IPO regarding the emblem. The exact wording of this NOC can be reproduced from the Hindu article, “no trademark identical with or deceptively similar to the said artistic work has been registered or applied for registration under the Trade Marks Act 1999 as per computer record of this office.” This NOC and its intended purpose makes sense when read in conjunction with the PTI coverage of the matter. The PTI report quotes an IMA representative as saying, “The new logo…will be for use under section 45 (1) of the Copyright Act, 1957.”

As indicated, some clarity can be found within section 45(1) of the Copyright Act:

“45. Entries in Register of Copyrights

If one reads the proviso to this section in conjunction with the NOC as reproduced above, it is clear that the NOC was obtained to satisfy this particular section. The NOC also specifically refers to the emblem as an “artistic work”. This could indicate a parallel intention to register the copyright in the emblem. (Also see here) The logic and intention behind the section 45(1) requirement has been substantially debated here in the past. Our readers may revisit the same here and here.

As alluded to earlier, (and the reports are unanimous on this point) the IMA through the use of this emblem, wishes to set apart practitioners of modern medicine or allopathy from the practitioners of other forms of traditional medicine i.e. homeopathy, Ayurveda, etc. It has always been a concern for the IMA that many practitioners from the latter group, often pose as the former and prescribe allopathic cures. This practice lacks legal backing because such practitioners are often not (a) educationally qualified to do so, and (b) are not regulated by the Indian Medical Council Act, 1956 which regulates practice of modern medicine. It also leads to medical excesses where the so called “quacks” or frauds prescribe without authorization and endanger people’s lives. Readers may access a detailed report on this over here.

Knowing that the IMA primarily intends for this emblem to be used by allopathic practitioners, makes the utility of trademark protection slightly hazy for me. As is common knowledge, a registered trademark may be exclusively used and enforced only by its registered proprietor. Sections 28 and 29 of the Trademarks Act, 1999 are sufficiently clear on this point. The only exception is “permitted use” meaning due authorization through assignments, registered users, licenses etc.

Now, the IMA is a voluntary, representative society registered under the Societies Act, with its own members. It is unclear as to how exactly it is going to ensure that the trademarked emblem is used by all allopathic practitioners in order to set them apart from the others. A number of other follow-up questions also come to mind at this point: how is the IMA going to commercialise its trademark, or in other words ensure widespread authorized use? What would be its terms and how will it regulate the same? What happens to those who are not members of the IMA? What happens if an allopathic practitioner uses the mark (in consonance with the IMA’s primary intention) but without authorization (i.e. unauthorized use of the trademark) from the IMA? Assuming it successfully generates the use of this logo by allopathic practitioners, what happens if and when the logo turns generic through its use?

Finally, I’d like to dwell on the central point of controversy surrounding this logo. This logo is undeniably similar to the Red Cross emblem. The only difference seems to be that the red in the IMA logo is of a lighter shade (something that most people wouldn’t notice) and the white “Dr.” in the center. The concerns dominating most of the press coverage on this subject, are centered on the Geneva Convention, 1949 that elevates the Red Cross emblem to a high level of protection. As can be noted from this well-articulated report, the emblem symbolizes neutrality of medical aid during war-time, and is the intellectual property of National Red Cross organizations around the world. The Convention protects, and in turn imposes a duty on all contracting states to protect, this emblem from being reproduced and used commercially. India protects the Red Cross emblem from commercial use through section 12 of the Geneva Conventions Act, 1960. The section essentially prohibits all use of this emblem without prior authorization from the government, including “any design or wording so nearly resembling (the emblem)…as to be capable of being mistaken for, or, as the case may be, understood as referring to, one of those emblems.”

Interestingly, as this website notes, this prohibition also finds expression under Chapter II, s. no. 12.2.6 (p. 64) of the Draft TM Manual, accessible here. Including this as a guideline for section 9(2) of the Trademarks Act (i.e. absolute grounds for refusal of registration) the draft manual notes, “In respect of mark generally consisting of cross device, applicant is required to comply with the condition not to use the cross device in red or in any similar colour, or in the manner prohibited under the Geneva Convention Act, 1960.”

With this in place, it will be interesting to see how the IPO works around the registration of this confusingly similar (or is it?) logo.

End note: Red Cross has vehemently opposed the widespread, unauthorized use of its emblem within the medical services sector, as a symbol for first aid, pharmaceutical services, etc. This has been the case both in India (see here and here) and abroad (see here, here and here).

[1] Many reports have been incorrectly using the terms “copyright”, “patent” and “trademark” interchangeably to denote IP protection for this logo. This not only puts us off course as to exactly what kind of protection is being sought, but also confuses the masses. Here are some relevant examples: http://timesofindia.indiatimes.com/city/aurangabad/ima-copyrights-logo-emblem-to-curb-quackery/articleshow/59837019.cms “IMA has come out with a copyrighted logo…any unauthorised use of logo and emblem can draw legal action under the Trade Mark Act, 1999..The IMA has patented this logo to be used by MBBS doctors only.”; http://www.deccanherald.com/content/625456/ima-patents-logo-allopathic-docs.html.