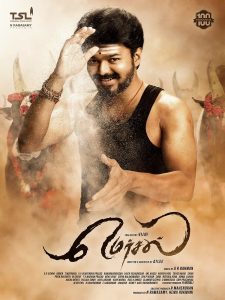 Kollywood is distracted. With questions swirling around the “big-wigs” of Kollywood’s decision to dip their toes into the cesspool of Tamil Nadu politics, some of the lesser demi-gods have been forgotten. Vijay, or Ilayathalapathy (Young Leader) as he’s called by his ardent and occasionally rabid fans, was one of the forgotten few. That is, till he started advertising his latest movie. (NOTE: A part of this article is going to employ a common cinematic device: A story within a story.) The hero of OUR story, is the movie title itself, Mersal (“To astonish/ one who shocks”). That is where we start our story today, June 20th 2017, where we were introduced to the hero.

The first shot, was breathtaking. An introduction scene par none, where we saw the hero in all his glory vis-à-vis the First look. Additionally, we finally had a name to associate to the hysteria, Mersal. Since then, like the first 20 minutes of any good masala movie, it has been smooth sailing. We have come to understand the character of this dramatis persona, Mersal, through its audio launches, songs, and teaser releases. In fact, our hero went so viral, every time you typed “Mersal” on twitter, an emoji would pop up! Everything seemed cheery, sometimes nauseatingly so. However, every good movie needs a solid villain, and boy do we have a doozy: Mr. Rajendran of AR Film Factory. Let’s deep dive into the back story of this ‘villain’.

Like most villains, our character wasn’t always malevolent. In 2015, Mr. Rajendran settled on the title Merrasalaitan (“state in which a person is shocked or stunned”) to launch his son as a hero in the film industry. Unfortunately, the Tamil Film Producers Council informed him that title was already registered to one Mohammed Sadiq of Green Apple Pictures in 2014. That didn’t deter Mr.Rajendran. He immediately obtained a no objection certificate from Mr. Sadiq and got the title transferred to his name. He even registered the script with the South Indian Film Writers Association and reportedly commenced the shooting on August 22 2016. The villain had a free rein, until the introduction of our hero.

When he found out about Mersal, and how it clashed with the title of his own movie, Merrasalaitan, he filed a complaint with the Tamil Film Producers Council by a letter dated June 21, 2017 stating that the name Merrasalaitan was registered in his name. Mr. Rajendran allegedly complained once again to the Tamil Film Producers Council, yet his plea fell on deaf ears. Our villain didn’t do anything excessively untoward, like kidnap the hero’s love interest or threaten the hero’s family, instead he decided to be unorthodox: He approached the court.

Here’s where things started to pick up pace. Judge Anita Sumanth of the Madras High Court was asked to decide whether the two titles were the same. In his affidavit, the petitioner, Mr. Rajendran said he had been renewing the registration in the title every year after the payment of necessary charges. In response, Judge Sumanth issued an interim stay against the filmmakers preventing them from using the title Mersal for the film’s publicity, distribution, and release till October 3.

*Cut back to present day*

So was this the end of the line for our protagonist? Had the wily villain outsmarted our leading man? Will the stellar cast, the world’s most ‘liked’ teaser and a 100 crore budget all be in vain without a settled moniker?  If you’ve seen any Vijay movie, a plot twist is not only anticipated, it is deemed necessary.

The plot twist in our story? The makers of Mersal, Sri Thenandal films, have got their title trademarked. Apparently, the first South Indian film to do so. Hoorah. The final Act of this film will be revealed on October 3rd, when Sri Thenandal Films would file their reply to the interim injunction. But already, there are some glaring plot holes that need to be addressed before we witness the epic finale.

First, have they truly “acquired” the trademark? A quick search on the Trademark database states that while a word mark for “Mersal” has indeed been applied for by N. Ramasamy, the director of Sri Thenandal films, its status is: “OPPOSED”. Usually, if the status in the Indian Trade Mark Registry website displays the word “Opposed”, it indicates that an opposition has been filed by a third party. The opposition might be either due to a similar mark already existing in the Trademarks Journal, or simply the fact that the trademark is non-distinctive. Whatever the reason, trademark opposition proceedings are cumbersome and laborious, consisting of extensive replies, evidence taking and documentation. After which, the Registrar hears arguments from both sides and pronounces his/her decision. The entire exercise usually takes up to 2 years for complete resolution.

Given this background, why are some media houses (TOI, Newsminute, Hindustan Times) reporting that Sri Thenandal Films have acquired a Trademark in the movie title? Is it possible that a settlement agreement has been concluded between Sri Thenandal Films, and Mr. Rajendran and the registry website has not been updated to reflect the same? Or is this just another example of lazy legal journalism that’s dominating our news cycles?

Second, Hema Rukmani of Sri Thenandal films told Silverscreen, “We want to save the originality of the title.” Ironic, since Mersal is a common Tamil phrase, used to describe astonishment. In fact it was the title of a song, Merasalayiten in the film, I. It was neither conceptualized nor invented by the producers, so under what rubric is she claiming the title to be original? Because her company filed a trademark application first? The intention behind this trademark application is dubious to say the least.

On June 20th, 2017, the first look of the film was released. On June 21st, 2017, Mr. Rajendran sent a complaint to the Tamil Film Producers Council. Application date for the Trademark? 30th June, 2017 according to the Trademark Registry website. That is a full 9 days AFTER a complaint was made to the Tamil Film Producers Council. Thenandal films weren’t being ingenious, they were trying to subvert the system to cover their posteriors. What’s even more revealing, is this quote from a member of the Mersal team, that, the legal process involved in trademarking the title took the film’s team six months. 6 months before the date of the quote was March 26th 2017: A good 3 months BEFORE the application date on the trademark registry! Something clearly does not add up here.

Third, what precedent does this set for the Tamil Film Industry, or in fact movie industries in general? Usually, producers register the names of their movies with their respective film councils, and pay a token fees every year. By bypassing the Tamil Film Producers Council, and trademarking the name of the title, is the message: Trademark law is superior to local business usage? This could create an interesting pattern, which would make the role of local film producer’s councils obsolete for registration of names, and all movie titles would have to be trademarked first. Though, it is going to be interesting to see how Trademarks are acquired on generic movie names like 2.0, Mass, Citizen, Red, Villain etc. (All real Tamil movie names). A positive consequence of sidestepping the Producers Council and directly acquiring a TM, might be the increased transparency in the endeavor: There might be lesser situations of grappling over movie titles. Formality bespeaks transparency.

Fourth, if the press statements of the Mersal team are anything to go by, legal literacy is sorely lacking in the cine-field. Says a source “So, if anybody uses the term Mersal for commercial purposes, a part of their revenue should be paid to the team as royalty. For example, if someone decides to come up with a Mersal bubblegum, they will be using our trademark and have to pay us royalty.” This quote is symptomatic of the prevailing notion that a trademark registration is a license for censorship and profiteering. It sounds less like an example of s. 29(4) of the TM act analysis for well known- marks and more like a legal threat. Note: s. 29(1) and s. 29(2) would not be applicable here, since Mersal, the movie and the putative Mersal bubblegum are NOT similar/identical goods and services).

Of course, all this ‘investigative IP journalism’ might be for naught. As I said, Thenandal films and Mr. Rajendran might have entered into a settlement agreement to withdraw the opposition petition before the registry and the HC, in exchange for a sum of money and the TM registry might not have been updated to reflect the same. Irrespective, this hasn’t been smooth sailing for Vijay, and his Mersal team. The deeper you dive, the more pungent the stench. Honestly, naan merasalaiten (I was astonished)!

P.S- I have intentionally omitted analysis of normative questions like can a movie title be Trademarked, what is the test for infringement etc. This article focuses only on the question of whether a valid registration of the mark has been made, circumventing a registration with a local producer’s council and if so what are the consequences of the same.

For an in-depth analysis on Trademarks, Copyrights and Movie titles please complement this reading with: