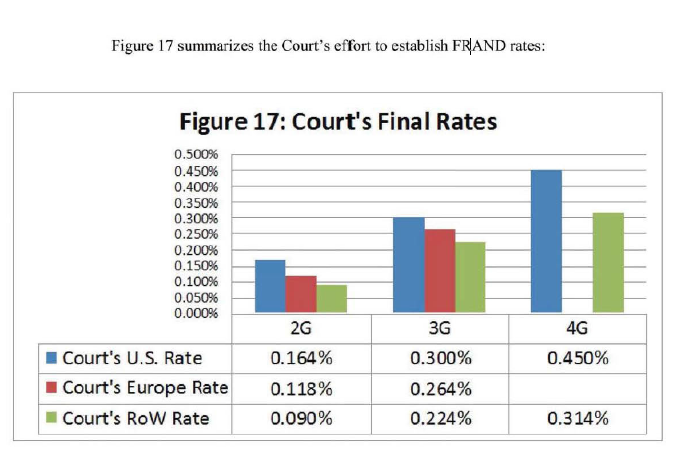 In my first posts in 2017, I had discussed various FRAND / SEP issues that were raised in the Qualcomm matters in Korea, and the US.  I end the year with a similar post on FRAND issues.  Together these decisions bring clarity to what is FRAND and hopefully will help the Indian brands as well in their litigation against SEP owners.  This post arises from the determination of FRAND rates in TCL Mobile Limited, and TCT Mobile v. Telefonaktiebolaget LM Ericsson, Case No. 8:14-CV-00341-JVS-DFM (C.D. Cal.). The decision can be downloaded from here.  I am particularly happy about the decision as it endorses the views of Indian brands in their litigation against LM Ericsson at the Delhi High Court.  See our posts on these litigations here, here and here.  I had briefly discussed the TCL matter when it was filed in 2014 here and here.

Ericsson is most likely to appeal this decision but I guess that the decision will be upheld.  This decision is extremely logical and thoughtful.  And is a much clearer FRAND royalty analysis than the Unwired Planet decision.   This is one of the few cases where a court has valued an entire portfolio of patents and also a first where a court deals with the non discriminatory prong of FRAND.  Both sides used multiple economic and technical experts and different studies done by Ernst & Young India and Concur IP Consulting.  Needless to state, the decision is very solid and leaves little ground on which anything significant might turn.  Judge Selna uses Ericsson’s own statements given over a period of years to come to a determination on certain aspects.  It will therefore be very hard for Ericsson to argue that the decision is wrong given that the decision is based on its own statements.

Before I summarize, I must state that there is nothing in the decision that negates the smallest saleable patent practicing unit (SSPPU) analysis / bottom up analysis.  This could be because both parties agreed to use total sales on which royalty could be paid out.

In March 2014, TCL sued LM Ericsson in California alleging Ericsson had breached its obligation to license patents essential to the 2G/3G/4G cellular standards on terms that are FRAND.  TCL was willing to take a license, but only on FRAND terms.

While the parties were negotiating a license (2011 – 2014), Ericsson sued TCL in multiple jurisdictions for patent infringement to force TCL to take a license on Ericsson’s terms.  Once TCL initiated the lawsuit in California, it filed a motion for antisuit injunction in 2015 and enjoined Ericsson from prosecuting its foreign lawsuits until after the FRAND issues were resolved in the California case.

In a decision on  the bench trial (held in February – March 2017), Judge Selna ruled that Ericsson’s offers to TCL were not FRAND.   These rates were unfair and unreasonable when compared to the number and value of Ericsson’s patents.  Further, the rates were discriminatory vis-a-vis TCL’s competitors.

During the litigation, Ericsson made two offers to TCL that Ericsson contended were both FRAND.  These offers are referred to as Option A and Option B in the decision.  Option A entailed, an annual payment of $30 Million for $3 Billion in sales with additional percentages to be paid if the sales exceeded $3B and a running royalty of :

Option B entailed, an annual payment of $30 Million for $3 Billion in sales with additional percentages to be paid if the sales exceeded $3B and a running royalty of :

Judge Selna determined both Options were not FRAND.

Of those families, Ericsson owns the following number of essential patents

C.  Rate for Ericsson’s proportional share of SEPs for 2G/3G/4G

Judge Selna recognizes that the portfolio value changes according to jurisdiction and factors it in the analysis for value of the portfolio.  Ericsson’s own statements that it held more patents in the United States than in any other jurisdiction also helped. See, Final Judgement at page 28.

Compare these rates to what the Indian brands are depositing in court under the various interim orders.  I will be posting on these separately.

Some statements from the judgement are extracted that have major ramifications on FRAND: