Since we have already discussed the issues concerning Mattel’s “in camera hearing” application, we will now be dealing with a more substantive issue i.e. the claim of TM Dilution.

But first, the facts.

There exists a movie, released on 24th November, called “Tera Intezaar”. The movie wasn’t released at the time of the Order’s issue (22nd November).

Said movie consists of a song called “Sexy Barbie Girl”, which was, as is common practice, released for public consumption prior to the movie itself on 8th November.

The song’s Gulzar-esque lyrics, as reported by the Court, run as follows:

Apart from noting that the lyrics & video were somewhat risqué, we also need to note that the central actress (some “Sunny Leone”) in the song’s video is, apparently, quite a prominent figure in the adult entertainment industry.

Readers interested in forming a more comprehensive and thorough understanding of the song can click here.(You will find that the song’s name, at the provided link, has been changed to “Sexy Baby Girl” because of a settlement (discussed as a post-script) reached between the parties.)

Consequently, Mattel Inc. sued  for TM Infringement and prayed for an ex-parte injunction restraining the release of any version of the movie that contained the song.

Prior to discussing the J. Endlaw Order, it would be beneficial to briefly discuss the theoretical basis for TM Dilution claims.

Hence, traditionally, TM infringement was judged on the touch stone of consumer confusion.

Based on the above theory, Mattel’s claim of TM Infringement would seem absolutely absurd.

Usage of the mark “Barbie” on the impugned product (the song), wouldn’t cause any confusion in the market, as the two products Barbie (the toy) and “Sexy Barbie Girl” (the song) exist in distinct business areas. Even the most persuasive of lawyers would find it difficult to convince a Court that a reasonable consumer would, upon listening to “Sexy Barbie Girl“, believe that the impugned song was produced by Mattel Inc.

On what theoretical understanding, then, does Mattel’s claim lie?

That is where the “Dilution theory” steps in. 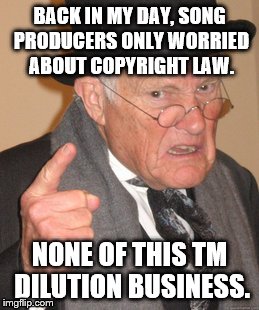 Let us consider a hypothetical example to understand the above theory better.

Assume the existence of a hypothetical person named “Surisetti“.

Assume said hypothetical Surisetti to have all sorts of virtues. Rather, assume he’s a superhero.

Unfortunately, in an explosive battle with a team of supervillains, Surisetti laid down his life for the greater cause. News-reports noted that he was outnumbered and chose not to use guns. Running the risk of stating the obvious, the battle lead to destruction of over half the city. Most economists, observing that super-villain rule might have been a better overall outcome, advised the government to initiate an academic program to educate potential superheroes in economics.

Anyway, the economists observations notwithstanding, Surisetti was revered across the masses. After his death, the word “Surisetti“‘ started being used as a common noun for referring to excellence, awesomeness, amazingness and the sort. In fact, as time passed, the secondary meaning almost overshadowed the usage of the word as a reference to the late superhero. 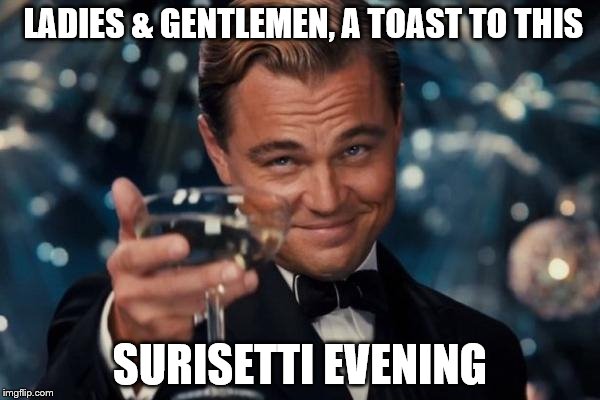 People used the word “surisetti” as a common noun, without even knowing who the original superhero Surisetti was. To sum up explicitly, the word “Surisetti” started conveying meanings distinct from the source.

Trade marks can also, similarly, convey meanings beyond the origin. For instance, the Apple logo might not just be informing consumers that the product originates from the company Apple, but also assures of a certain standard of quality. The theory argues that such meanings affect consumer decisions and therefore, should be protected, via law, from being diluted. It is the Dilution theory that forms the basis for protecting “well known marks” in fields of business distinct from the one in which the trade mark is registered under.

Now, we can understand the basis for Mattel’s ire. Mattel claimed that the conception of Barbie, as a true modern role model, was being diluted due to the song “Sexy Barbie Girl“‘s portrayal of Barbie as a mere cosmetic character.

On a slightly lighter note, on account of all the criticism faced by Barbie dolls for perpetuating gender stereotypes and unrealistic beauty standards, I suspect Mattel’s official stance on the Barbie doll being an “aspirational figure” to be bit of a  private joke amongst Mattel’s management. To be fair, of late, they have been acting upon the criticism. 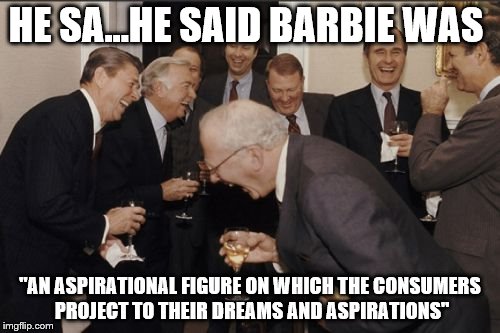 Humour aside, I believe that Mattel’s concern, though slightly excessive, isn’t incredulous. If Mattel wished to portray the Barbie as a typical aspirational role-model for young girls, having Barbie being portrayed as a cosmetic character by an actress with credits such as Alabama Jones and the Busty Crusade (Link to Wikipedia page), wouldn’t exactly be in its best interests.

Issue II: TM Infringement and Dilution of the Mark “Barbie”.

Mattel’s claim, in short, is that the impugned song’s portrayal of Barbie (by an adult actress, dressed in baby pink, as a sexually provocative woman) is antithetical to Mattel’s promotion of Barbie as more than just a blonde bimbo, who dons various aspirational avatars (such as that of an astronaut, tennis player, fire fighter, surgeon, et cetera).

J. Endlaw referred, in detail, to a 2002  U.S. (Court of Appeals, 9th Circuit) Judgment (Mattel Inc. v. MCA Records Inc; 296 F.3d 894 (9th Cir. 2002)), which dealt with a TM Dilution claim in the context of Swedish band AQUA’s song “Barbie Girl” (not to be confused with Tera Intezaar’s “Sexy Barbie Girl“). For some reason, the Order referred to AQUA’s song as “Let’s go party“, when the song’s official YouTube link refers to it as “Barbie Girl“.

As an aside, AQUA’s “Barbie Girl” is one of those songs for which you don’t express appreciation publicly. I might, in a voice as deep as I can manage, extol Jimmy Hendricks’s guitar solos and Pink Floyd’s psychedelic rock, but deep down, I know “Barbie Girl‘ is one of my favourites.

Anyway, coming back, let us look at the Order’s analysis of the U.S. judgment.

A. That a trade mark owner was not entitled to control “public discourse“, merely because the public started using the word mark in a context beyond its traditional function of a source indicator. The song was merely communicating “ideas” or a “point of view“.

Now, it is important to note that though J. Endlaw chose to deal with the U.S. judgment in considerable  detail, it is unclear whether it was the decisive factor. Nevertheless, it wouldn’t be unfair to say that the judgment was quite relevant in the final decision making.

Next, J. Endlaw reasoned that Courts need to be reluctant to entertain suits against public releases that have already been cleared by the Censor Board (CBFC). Also, the Court held that CBFC approval would result in a prima facie presumption of the allegedly infringing work’s legality. Relying upon prior authorities, he reasoned that Court interference, where CBFC already gave clearance, would militate against the value of free speech.

Further, he relied on Mattel Inc. v. Walking Mountain Products (353 F.3d 792 (9th Cir. 2003)), to hold that infringement, by way of impairing Barbie’s market value, was not caused because the allegedly infringing work (incredibly weird artwork involving Barbie dolls) was a “parody of Barbie“. I am unsure as to how this reasoning holds up because the parody defence is generally a subset of the fair use defence under copyright law (as opposed to TM law).

A kindly reader (“Anonymous“) pointed me towards the judgment of Tata v. Greenpeace, wherein it was held that the parody defence was applicable to TM Infringement as well. The central reasoning was that the use of TATA’s logo in Greenpeace’s video game was a parody and hence, not in the “course of trade” (as required under S. 29(4) for a sustainable claim of infringement).  Shayonee Dasgupta has written on this judgment here.

Additionally, J. Endlaw also factored in the recent agitation against the release of the movie Padmavati. After noting the recent turmoil, he reasoned that restraining release of Tera Intezaar was “likely to send a wrong signal to the public at large“.

Finally, the Judge had an interesting take on interim order jurisprudence:

“Though traditionally grant of orders under Order XXXIX Rules 1&2 of the CPC was governed by the elements of prima facie case, irreparable injury and balance of convenience only but it is settled law that an interim order can also be refused if the same is not found to be in public interest.”

TM Dilution and the boundaries to a TM owner’s claims.

Post Script: In another J. Endlaw Order, issued a week after the Order discussed above, it was noted that the makers of the Tera Intezaar agreed to change the song’s name to “Sexy Baby Girl” and Mattel agreed to the same. Also, other modalities were discussed in the Order.