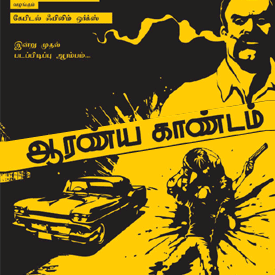 The Madras High Court, in Thiagarajan Kumararaja v. M/s Capital Film Works and Anr. recently held that the producer of a film has the right to dub that film in any other language, subject to any agreement to the contrary. This is the first time that the Court has explicitly deliberated on the rights of the producer qua the author of the script regarding dubbing of a film. The judgement is available here.

The writer of the script for the award winning, neo-noir, Tamil film Aaranya Kaandam, and the appellant in the present case, authorized/licensed Capital Film Works, the respondents, to produce a film based on the script, upon being paid some consideration. After the release of the original film, the appellant filed a suit in the Madras HC, alleging that the producers were contemplating remaking the film and also dubbing it in other languages and claiming that this would constitute an infringement of his copyright in the script. After a long journey at the interlocutory stage, the Madras HC dismissed the suit, and the plaintiff appealed to the division bench of the High Court.

Before moving on to an analysis of the judgement, it would be useful to briefly review the legal provisions applicable to copyrights in films, which were at issue in this case.

Section 17 states that the author of a work is presumed to be the owner of its copyright.

Section 2(d) defines an author, which includes the author of a literary work, and the producer of a cinematograph film. A producer is further defined under Section 2(uu) as a person who takes the initiative and responsibility for making the work.

The crux of the High Court’s judgement relied upon the interpretation of Section 2(ff), which states as follows:

“‘communication to the public’ means making any work available for being seen or heard or otherwise enjoyed by the public directly or by any means of display or diffusion other than by issuing copies of such work regardless of whether any member of the public actually sees, hears or otherwise enjoys the work so made available.”

Is Dubbing ‘Communication to the Public’?

There were three connected but distinct issues of law before the High Court:

The first involves switching the sound recording to the film, while retaining the visual recording. The second involves recreating all of the different aspects of the film.

The appellant argued that the dubbing of a film in another language amounted to a remake of the film. The new film being a new adaptation of a literary work, and the same would be infringing the author’s exclusive right to create a cinematographic film from their literary work. Further, the appellant also argued that dubbing the dialogue of a film would amount to a translation of the underlying script, which right, under Section 14, also vests exclusively with the author of the work, i.e. the appellant.

The respondents argued that dubbing and remaking of the film did not amount to a translation of the literary work, rather, it amounted to ‘communication to the public’, which was an exclusive right granted to the owner of copyright in the film (under Section 14(d)(iii)), namely, the producers.

On issue (1), the Court held that the term ‘communication to the public’ had to be read expansively, considering that the definition under Section 2(ff) contemplates a member of the public that ‘sees, hears or otherwise enjoys’ a work. In Para 17.1, the Court states –

On issue (2), the Court held that dubbing is distinct from translation, and the producer’s rights to communicate the film to the public, through dubbing, does not affect the rights of the author of the underlying script. The Court’s reasoning was that the sound recording constitutes a part of the film, and exclusive rights over the same rest with the producer of the film. Strangely, the court does not make any reference to Section 13(4), which embodies this proposition.

The Court answered issue (3) in the negative, holding that the right to communicate a film to the public does not include the right to remake the film entirely, as this would entail making changes to the underlying script, without the author’s consent. As the remake would be substantially based on the underlying script, the same would infringe upon the exclusive rights of the author of the script.

The Right to Remake – Whose Right Is It Anyway?

In my opinion, the Court has come to the right conclusion on all counts. However, the Court’s analysis of the various composite rights in films and their interrelationship could have been better explained, particularly the issue on the right to remake a film and the extent of the rights vested in the author of a film, namely, the producer.

A few months ago, during the Raabta-Magadheera copyright row, we had some interesting posts on this blog on whether a producer has the locus to sue for infringement in the case of an unauthorized remake. We had a few conflicting opinions on this. On the one hand, MV Swaroop (incidentally, the advocate for the appellant in this case!), argued here that the producers right is limited to preventing the copying of the particular video recording or sound recording in the film, for example, by preventing the distribution of pirated versions of the film, a view supported by the Bombay High Court in Star India Pvt. Ltd. v. Leo Burnett and Zee Entertainment Enterprises Ltd. vs. Gajendra Singh & Ors. However, Jagdish Sagar argued here that the rights of producers are broader than merely a right over production of the physical copies of the film, a view also taken by the Calcutta High Court in Shri Venkatesh Films v. Vipul Amrutlal Shah.

In the present case, the Madras High has expanded the rights of the producer by broadly interpreting ‘communication to the public’, under Section 14(d)(iii), which is in contrast of the narrow reading of producers’ rights under Section 14(d)(i). The outcome, ultimately, still leaves the scope of producers’ rights unclear. Even assuming that the producers of a film do not have the right to remake the film, as it would be based on/ substantially similar to an underlying work, do they still have the right to challenge a subsequent remake on the grounds that it infringes their rights under Section 14? Therefore, would any remake of the film have to be authorized by both the author of the script and the producer? Hopefully there will come a day when we can answer these questions with certainty. (Until then, kick back and check out this great analysis of Aaranya Kaandam’s story and filmmaking techniques)