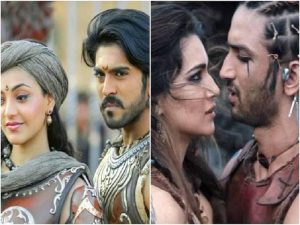 The upcoming hindi film ‘Raabta’ was recently slapped with a copyright infringement suit by the producers of the Telugu film ‘Magadheera’. (Interestingly, according to recent reports, Telugu writer, SP Chary has alleged that the story behind ‘Magadheera’ was copied from his book, ‘Chanderi’ – but we’ll pick up on this thread another time).

Both films involve lovers who find each other in a second life (reincarnation and all that). Other similarities include parallel visualization of the two different “births” or generational settings – with the previous one being a royal, medieval setting. And both films have a notable antagonist vying for the woman’s affection (rather aggressively, I might add!)

I haven’t been able to access the order but according to reports, Geetha Arts, the producers of ‘Magadheera’, have alleged that the “storyline, plot and screenplay” of Raabta has been copied from their film. Soon after, the producers of ‘Raabta’ came out with a public announcement. Through this, they have not only rejected the claims made by Geetha Arts but also emphasized that copyright law protects expression and not ideas, themes and plots.

This matter was reportedly scheduled for June 1st. No new details have surfaced as of now but we will report them as they come. At this point, however, I propose to discuss a few key aspects of cinematic copyright law in view of the multitudes of such infringement suits.

To me, the producers of Raabta appear to have a credible defence in terms of the idea-expression dichotomy i.e. a love story involving reincarnation is an idea that should be free of copyright encumrbances. After all, India is no stranger to reincarnation and we’ve had plenty of movies on this count (Om Shanti Om, Karz, Kudrat, Karan Arjun to name a few famous ones.)

As per the courts’ earlier dictum in RG Anand:

“Where the same idea is being developed in a different manner, it is manifest that the source being common, similarities are bound to occur. In such a case the courts should determine whether or not the similarities are on fundamental or substantial aspects of the mode of expression adopted in the copyrighted work.. In other words, in order to be actionable the copy must be a substantial and material one which at once leads to the conclusion that the defendant is guilty of an act of piracy.”

The challenge, of course, lies in figuring out what part of the work is an expression that is protected and therefore open to a claim of infringement. But, that too has been aided by several tests such as the lay observer test, scenes-a-faire doctrine and the merger doctrine. For those interested, I have previously covered them over here.

The Indian Problem with the ‘Merger’ Doctrine

A perusal of most cases of copyright infringement in film (especially the ones by Hollywood producers against Bollywood remakes), reveals that it is often not easy to convince an Indian judge that one cinematographic film has copied another. A research paper (see here) on this issue claims that our courts have misunderstood and incorrectly applied the merger doctrine to hold that a number of our Bollywood films are not infringements of Hollywood ones. This is done by classifying the idea in the original film at a rather low level of abstraction i.e. vesting it with more specificity. The paper argues, “A highly abstract idea…can be expressed in countless original ways. An idea at a lower level of abstraction…can also be expressed in many original ways, but in fewer ways than the generic idea..As the idea continues to be defined at a lower level of abstraction, it becomes more difficult to distinguish it from the expression.”

Take the Raabta: Magadheera example itself. One might argue that the bare concept of reincarnation is a very “abstract” generic idea and can be expressed in a great number of ways – each of which are protectable. At a lower level of abstraction, one might think of a plot involving a couple who were estranged in a previous birth and come together in the present life. This is more “expressive” than the earlier idea of just reincarnation. However, under the courts’ categorization, this would be seen as an “abstract idea” which merges with the expression. Take this further down to appreciate the problem with the courts approach. An even lower level of abstraction would include a couple who lived in medieval India as royalty and were estranged in a previous birth, thanks in no small part due to a hideous villain. They find each other in a subsequent one and must fight off the same villain (who needless to say has also been reincarnated to make their life a living hell!).

Indian courts have treated even the above specific plot line as an abstract idea that merges with the expression under the idea-expression dichotomy. It is not yet clear as to how much of specificity in the plot line would take it out of the “abstract” idea category and into the purely expressive part. Surely, if this means only the final cut of the film itself, then indian courts have effectively reached the same conclusion as the Norowzian court, as explained below.

Another reason that courts refuse to accept cinematographic copyright infringement (and one that greatly piques my interest) is the ‘physical copy’ doctrine that I had covered in passing over here. As I had mentioned there, the Indian courts have ruled in cases like Star India v. Leo Burnett, the Zee Entertainment v. Gajendra, etc that infringement of copyright in a cinematographic film happens only when a ‘physical copy’ – i.e. a copy of the recording of the film over a physical medium – is made. This seems to be in conjunction with the Copyright Act as well. Under section 51, primary acts of infringement include infringement of exclusive rights granted to the ‘author’ of a work. This takes us back to section 14(d) which offers a limited right of ‘reproduction’ to authors of cinematographic works. Here, the right is to ‘make a copy’ of the film. While for other literary works (s 14(a),(b) & (c)) it is to “reproduce” the work. So, also, a reading of section 2(m)(ii), the ‘infringing copies’ under section 51, only mean physical copies in relation to cinematographic films.

The Journal of IPR notes how this is different from the case of other literary works. Leo Burnett also briefly noted the reason behind this differential protection, “…A narrow copyright protection is accorded to a film/sound recording than for literary, dramatic or artistic work. The reason perhaps could be that they have to be original to satisfy the test of copyrightability, whereas the requirement of originality is absent for claiming copying in cinematograph films/sound recordings.”

Film as a ‘Dramatic Work’?

On an interesting aside, the aforementioned case of Norowzian, had another issue: whether the plaintiff’s film could be construed as a ‘dramatic work’. Justice Rattee perused the Copyright, Designs & Patents Act, 1988 and observed that separate protection is provided to literary, dramatic, musical works (section 1(1)(a)) and films (section 1(1)(b)). Similar to our own copyright act, the works in the former subsection must be “original” to qualify for copyright protection. The judge also noted that the definition of films u/s 5B of the act describes films as “a recording on any medium from which a moving image may by any means be produced.” He then opined that a film is a culmination of technical efforts such as editing, which makes the physical sequence such that it can never be recreated in reality. Because of this tendency and the provisions of the act as extracted above, a film was held to be an entity of its own incapable of being classified as a ‘dramatic work’.

It could be argued that such a position is untenable in view of our act’s provisions. Although we have a similar distinction between literary, dramatic, artistic and musical works (u/s 13 1(a)) and films (u/s 13(1)(b)), section 14 of our act provides that one of the exclusive rights granted to a copyright holder of a literary work is to “include” the work in a cinematograph film. Such language read with section 2(f) which defines “cinematograph” to be “construed as including any work produced by any mechanical instrument or by radio-diffusion” may be indicative of the legislature’s intention to separate the two types of works. Regardless, for purely speculative purposes, the view taken by the court of appeal in Norowzian, could expand the protection to films as that granted to other literary works.

A Change in Law?

Coming back to the ‘physical copy’ doctrine, the Calcutta HC rejected its application in the case of Shri Venkatesh Films v. Vipul Amrutlal Shah.The court disagreed with the dictum in Leo Burnett and applied the RG Anand dictum of ‘substantial similarity’ even to films. It held, “It is true that Section.14 (d) of the Act states that infringement of copyright of a film would take place by its copying. That is, in our opinion, only one type of infringement where the physical film or any electronic form of it is ‘carbon copied or replicated’…Infringement has other elements….In that context ‘copy’ has to be given a broad meaning, as held by the Supreme Court in R.G. Anand’s case.”

This seems right. Surely it cannot be the case that films are disentitled to copyright protection, unless someone copied the “physical” copy itself. Studies note that cinematographic films are a culmination of several distinctive efforts. Justice Rattee, in Norowzian, observed that a film is different from a dramatic work because of the ‘editing processes’ used to transform the underlying dramatic work into a cinematograph film. In extension of that argument, a film is a culmination of several underlying works but also includes technical inputs, cinematography, editing, which gives it a very identity of its own. Such a separate identity no doubt helps films qualify as separate copyrightable subject matter – but such separate identity should not mean that the infringement has to be a very literal ‘physical copy’ one. What of the other elements in the film? In other words, I argue that substantially similar copies should qualify as infringement, instead of just ‘physical copies’.

Having said that, the devil will be in the details. What qualifies as a protectable element in a movie plot? And how will substantiality be judged? As I’d noted earlier, the idea-expression dichotomy presents a tricky sliding scale in India. As such, one is not sure what will become of the Raabta:Magadheera controversy. Watch this space for more!