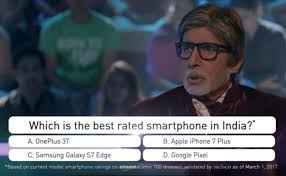 We are pleased to bring to you a guest post by our Fellowship applicant, Sreyoshi Guha. Sreyoshi is a 4th year student at Symbiosis Law School, Pune. This is her third submission for the Fellowship.

Kaun Banega Copycat: Sony Takes One Plus To Court

Over the last month or so, the IP community has been abuzz with news and events that have culminated in interesting debates and discussions on the blog itself. Somewhere amidst all of the hustle, a simple two-page order of the Delhi High Court snagged national headlines for a few days last month. Let me jump right into it: the phone company One Plus came out with an advertisement promoting its new ‘One Plus 3T’ model. This advertisement titled ‘Best Smartphone Contest’ was identical to the famous quiz show Kaun Banega Crorepati and showed Mr. Bachchan quizzing Rohan Joshi (of AIB fame) about which smartphone in India is the best. This did not sit well with the show’s producers, Sony Pictures, who knocked on the doors of the Delhi High Court, asking for an injunction against the advertisement. This is where things get interesting, albeit admittedly cloudy.

The Delhi High Court, granted an ex-parte ad-interim injunction order against OnePlus and others, restraining them from airing the advertisement or doing any other act that could infringe the plaintiff’s copyright or other IP rights, or amount to passing off or unfair competition. However, this order recorded no reasons for doing so, except that the similarities between the advertisement and the programme are such that could cause irreparable losses to Sony Pictures, in case the injunction isn’t granted. Despite it being an ex-parte, ad-interim injunction order, it lacked the usual degree of reasoning that the law burdens on such orders. This tendency of the courts to make do with poorly reasoned injunction orders has been covered recently on this blog over here.

An analysis of this must begin with understanding whether such an advertisement could in fact infringe the copyright subsisting in the popular show. To do so, I have to first determine which part of the show can be classified as copyrightable subject matter and then address possible infringement of the same. I can do that in two ways: (a) infringement of the show as a cinematographic film, and (b) infringement of underlying the show’s literary works including its concept note.

KBC finds copyright protection, as a cinematographic film, under section 13(1)(b) r/w section 14(d) of the Copyright Act, 1957. Section 14 grants the author of a cinematographic film the exclusive right to make copies, commercialise those copies and communicate the film to the public. Infringement of the copyright in the show may then, as per the Act (section 51), happen when any of these exclusive rights are violated or commercialization of ‘infringing copies’ of the work is undertaken.

In Zee Entertainment v. Gajendra  Singh (hereinafter referred to as the ‘antakshari’ case), the Bombay High Court opined that the exclusive right to make a ‘copy’ of  a cinematographic film under Section 14(d)(i) of the Act includes the right to make only a physical copy of the of the film itself and not a separately shot film resembling (completely or partly) the copyrighted film. The court, relying heavily on a similar dictum established in the case of Star India Pvt. Ltd. v. Leo Burnett, thus stated that mere making of a subsequent film resembling the copyrighted film does not amount to infringement of copyright in the first film. Although the argument of ‘substantial copying’ was brought up – and also discussed by the Court in Leo Burnett, both the courts agreed that such an argument need not be brought up once it is found that the defendant’s film is not a ‘copy’ of the plaintiff’s film.

This ‘physical copy’ doctrine, as upheld by the Indian courts, was laid down in the British case of Norowzian v. Arks. The reasoning behind this was discussed briefly in Leo Burnett – “Sections 14(d) and (e) on the one hand and Sections 14(a), (b) and (c) on the other, in the latter case the owner of the copyright has exclusive right to reproduce the work in any material form. The exclusive right in the former is to copy the recording of a particular film/sound recording… A narrow copyright protection is accorded to a film/sound recording than for literary, dramatic or artistic work. The reason perhaps could be that they have to be original to satisfy the test of copyrightability, whereas the requirement of originality is absent for claiming copying in cinematograph films/sound recordings.” Meaning, while literary works are protected against a broader ‘reproduction’ – which according to Indian jurisprudence is hit with the ‘substantial similarity’ test in order to constitute infringement – films are protected against ‘copies’, which have come to mean only ‘physical copies’. Therefore, it is impossible in a case with facts such as this to succeed in an argument of infringement of copyright in the film itself, instead of the underlying works.

Interestingly, in 2009, the Calcutta High Court in the case of Shri Venkatesh Films v. Vipul Amrutlal Shah, disagreed with this narrow understanding of ‘copying’ and held that infringement through ‘physical copying’ is only one type of infringement. It allowed a “substantial” copy of the film to qualify as a ‘copy’, despite there being no physical copy of the same. This shows differing views among the courts. And it would be interesting to see what view the court takes in this case.

A successful infringement action for a cinematographic film often lies as against the existing copyright in its underlying works. For example, for two films that are similar, the court often judges similarity of the underlying literary works i.e. the script, the screenplay, etc. The use of the background score could also become subject matter of an infringement suit due to a breach in the copyright subsisting in the sound recording. Of particular interest in this case, is copyright infringement of the concept note. KBC being a game show, copyright subsists in its format, rules, etc. Following the dicta laid down in Anil Gupta and Anr. v. Kunal Dasgupta (covered beautifully on this blog over here) it appears that KBC’s format, style, rules, etc being plagiarized into an advertisement such as this, could prima facie be indicative of infringement of copyright. The ordinary observer test as established in RG Anand, along with the ‘substantial similarity’ test could be applied to discern whether infringement of the concept note actually took place.

The order, in this case, also dealt with the possibility of a claim of passing off. The courts in both Leo Burnett and the ‘antakshari’ case agreed that the tort of passing off is not restricted to goods and can be established if the classical trinity of goodwill/reputation, misrepresentation and damage/real likelihood of damage, is proven. While I myself have covered the scope of the three ingredients at length over here and here, briefly speaking, all of those find application in this case. KBC, being a widely popular show airing since 2001 – its goodwill cannot be disputed. Any layman observer is likely to associate the set, the soundtrack, colours, etc to belong to KBC. Further, as per the dicta in the afore-mentioned cases, the similarities in the advertisement and the TV show, the presence of Mr. Bachchan as host, etc indicates an attempt at misrepresenting the AD as being part of the KBC series. It is only with regard to the ingredient of ‘damage’ that this case could find itself up against a wall. Aforementioned precedent holds that no ‘damage’ can predictably result from a situation where the commercial promotes certain goods different from the market utilized by the TV show. Even the standard of ‘real likelihood of damage’ gets predictably diluted, in my opinion, seeing as  KBC hasn’t aired on TV over two years and also that it is not very likely for ordinary viewers to confuse a 45-60 second advertisement of One Plus 3T for the TV programme.

Viewed in this light, the possibility of “irreparable losses” in terms of the interim injunction may also have been an incorrect conclusion by the court. These prima facie considerations could very well tilt the balance of convenience in favour of One Plus – something which, to begin with, never even found expression in the interim order. Whatever it is, it’s probably best to put an end to the back and forth in my own mind and wait for an outcome of the case!