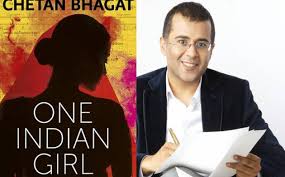 A Bangalore civil court has issued an O.39 R.1 ex parte interim injunction against Chetan Bhagat and his publishers, restraining them from selling copies of his recent book One Indian Girl.

According to Scroll, Anvita Bajpai, a Bangalore-based author, sued Bhagat alleging that the book was plagiarised from her short story Drawing Parallels, published as part of an anthology in 2014.

Copyright law served as a useful way for a philistine like me to get introduced to quality pop culture – The Maltese Falcon (Warner Bros v. CBS), Ningalenne Communistakki (Civic Chandran v. Ammini Amma), the music of Led Zeppelin, among other things. Given this habit of peering into the works that were the subject of these cases, you can understand my disappointment with this particular bout of litigation.

Text of the Order

“Heard Sri. HSH on IA No. 1 and perused the material on record. This application is filed by plaintiff for grant of ad-interim order of injunction against the defendants, their servants, etc. or any person claiming through them selling and marketing the book titled “One Indian Girl” both in the print form and e-book, etc. pending disposal of the suit. The plaintiff has sworn to an affidavit stating that the defendant No. 1 has intelligently copied the story and characters of her story “Drawing Parallels” and there are several parallels and similarity between both the stories and indulging in plagiarism her above stated story.

On perusal of the entire material placed on record, at this stage I am of the opinion that the plaintiff has made out a prima-facie case and if an ad-interim injunction is not granted, it will lead to multiplicity of the proceedings. Besides, the plaintiff may also suffer irreparable loss and injury. Hence, issue of notice on IA 1 is dispensed and I pass the following:

Issue ad-interim injunction against the defendants as prayed in IA 1 which shall be in force till the next date of hearing. Plaintiff to comply Order 39 Rule 3(a) CPC. Issue suit summons and notice on IA 1 along with ad-interim injunction order as prayed in IA 1 against the defendants after compliance returnable by 01.06.2017.”

Besides the obvious puzzlement at not one but two individuals wishing to take credit for what can only be described as a spectacular waste of quality paper, several issues strike me about this order.

In line with what seems to be an unwritten rule among injunction judges, we are not provided with reasons for the injunction’s award. While some judges (eg. Patel, J. in CTR v. Sergi) have pleasantly surprised us with a comprehensive examination of at least one prong of the injunction analysis (the existence of a prima facie case of infringement), most orders make do with a bland statement that the prima facie case, irreparable harm and balance of convenience factors are present.

In fact, I’m not even entirely convinced that this plaint even described a prima facie case of infringement. There’s no mention of the balance of convenience, for example, and the order mentions a particularly curious reason for awarding the injunction – “avoiding multiplicity of proceedings”.

Timing of the claim

Bhagat’s book was released in October 2016, and Bajpai’s suit comes nearly six months later. Even if this fact has no effect on merits in the final disposition of the case, surely it should have been considered in the injunction hearing? It’s a settled principle that equitable remedies (such as interim injunctions) are vitiated by delay and laches, and recent High Court jurisprudence is fairly clear on the point. Consider, for example, the recent bout of litigation concerning the plot of Phillauri. The Bombay HC threw out the plaintiff’s case on several grounds, and in doing so observed that the plaintiffs had not come to court with clean hands:

“This practice of parties claiming copyright infringement coming to Court at the eleventh hour and expecting Courts to drop all other work to listen to and decide their applications on a priority basis must be discouraged.”

Although Patel, J’s annoyance in that case was primarily against the urgency being sought by the plaintiff, the underlying cause was that he came to court a full three months after viewing the trailer that supposedly triggered the plaint.

Merits: scenes a faire and the idea/expression dichotomy

Assuming that Bajpai pursues litigation, her chances of success are extremely slim. She claims that Bhagat had access to her work since she gave him a copy to review at the Bangalore Literature Festival. However, the principles of copyright law are stacked so high against her that she may as well claim a Section 80G tax exemption on her lawyer’s fees – they’re going to amount to little more than charity.

First, there’s the idea/expression dichotomy, a jurisprudential balancing act between speech monopolisation and freedom of expression. Simply put, copyright only protects original expressions of ideas, rather than the underlying ideas themselves. Bajpai’s claim is that One Indian Girl is similar to her work inasmuch as the protagonist is a strong, independent, feminist woman, who wears a mask to fit into her conservative in-laws’ ways of life. She claims Bhagat stole other ideas as well, such as the use of a flashback to tell stories of past romances, and the presence of a third man in the equation.

Even assuming that all this is true, the fact of the matter is that love triangles are hardly avant garde. Writing about “modern Indian women” seems to be our national sport today, and the use of a flashback to describe a past romance isn’t revolutionary either. As an aside, you may notice that I started off talking about the idea/expression dichotomy but I’ve now begun to base my opinions on the novelty of the ideas used by the plaintiff. As Amy Cohen persuasively argues here, it’s almost impossible for courts to define ideas and expressions in a vacuum, with the consequence that they unwittingly begin to categorise novel thoughts as distinct “expressions”, and well-treaded thoughts by authors as abstract “ideas”. In a nutshell, novelty and subjective determinations of artistic value insidiously find a place in judicial decisions on the idea/expression dichotomy, but there’s little we can do about this. The fact of the matter is that none of the features in Bajpai’s work are novel or high calibre art, meaning that they’re that much likelier to be classified as abstract, unprotected ideas by a court.

The scenes a faire doctrine, which recognises that some scenes “need to be portrayed” in certain genres, also comes to Chetan Bhagat’s aid in this case. One of the allegations against him is that he copied Bajpai’s idea of having all the members of the love triangle present at the protagonist’s wedding. But it can be argued just as easily that a wedding scene forms a logical part of any love story, and a wedding featuring the “other man” is the only way to portray some of the emotions that may inhabit a love triangle.

I’m going to end here without comment on whether Bajpai’s suit is a publicity stunt – mostly because that’s pretty much all that Bhagat’s book was anyway.

Please feel free to leave reading suggestions and/or other thoughts on this interesting bit of litigation in the comments below!