In an order dated the 29th of February, 2012 the Madras High Court acting on a plea by Tamil script-writer Thiagarajan Kumararaja, passed an ex-parte interim injunction against Capital Film Works (India) Limited, the producers of the Tamil Movie – ‘Aaranya Kaandam’ restraining the latter from releasing the dubbed version of the movie in Telugu and Hindi. The order can be accessed over here. 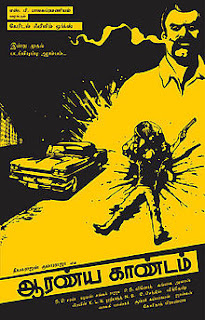 The Plaintiff in this case, Mr. Kumararaja, is the script-writer and director of the movie ‘Aaranya Kaandam’. According to Mr. Kumararaja he had consented to the production of the movie ‘Aaranya Kaandam’, based on his script, only in the Tamil language. Further unlike the normal practice in the Tamil movie industry, Mr. Kumararaja refused to assign all his rights in the script to the producers of the cinema. As a result the producers would be required to approach the script-writer for permission in case they wanted to remake the movie in another language regardless of the fact that they may continue to own the copyright to the Tamil movie. As per Section 13(4) of the Copyright Act, a script will continue to have an independent copyright even after it has been incorporated into a cinematograph film.
The court was convinced that the plaintiff would suffer irreparable injury if not granted an injunction since there was irrefutable evidence that the defendants were releasing the Telugu version of the movie in the first week of March, 2012 despite not having bought the rights for the same from the Plaintiff. The court was also convinced that the plaintiff would suffer irreparable injury if the movie was released and hence passed an ex-parte interim injunction as prayed for by the plaintiff.
The matter is now posted for 22nd March, 2012. The plaintiff was represented by advocates Ananth Padmanabhan and Niranjan Venkatesan.