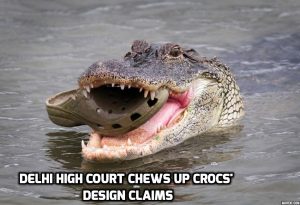 The Delhi High Court, in its judgement in Crocs v Liberty and Ors., on February 8, rejected Crocs Inc.’s applications for interim injunctions against the breach of copyright in their registered design. Mr. Justice Valmiki Mehta disallowed the applications for injunction, finding that Crocs’ designs for its namesake clog-type (see image) sandals were ‘liable to be cancelled’, and imposed substantial compensatory costs on the plaintiff.

[TL;DR – Crocs fell short of the Design Act’s requirement that any trade variations to existing designs be new and original for the design to be protected. The (w)hole sordid story, below.]

Crocs Inc., makers of the popular and polarizing footwear (disclaimer: I’m not partial to them), obtained registrations (Nos. 197685 and 197686) under the Design Act, 2000, for its perforated and non-perforated clog-type slipper/shoes in May, 2004. Subsequently, between 2014 and 2018, Crocs brought various suits against its competitors, the defendants, who were manufacturing and selling sandals with clog-type designs largely similar to its own registered design. The suits were filed in different district courts, as were applications for interim injunctions against the defendants. In some suits, Crocs secured interim injunctions against the defendants, which were sought to be vacated. All the suits and the applications were eventually transferred to the Delhi High Court, which decided them commonly.

Crocs claimed that the designs of the defendants infringed on its rights under Section 11 of the Design Act, entitling it to protection under Section 22. Defendants countered that Crocs’ designs were invalid, and liable to be cancelled under Section 19 of the Act, relying on Section 22(3).

The entire case rested on the Court’s interpretation of the grounds for cancellation under Section 19(b) to 19(d), which were consequently the defendants’ defences under Section 22(3).

While this finding would have been sufficient for the purpose of deciding the applications, the Court also entered into an elaborate exercise of deciding whether the Croc’s design was ‘new and original’ for the purpose of Section 19(d). Here the Court needlessly elaborates on the meaning of originality for claiming protection of an ‘Intellectual Property Right’, relying upon its earlier decision in Pentel Kabushiki Kaisha & Anr. v M/s Arora Stationers & Ors, (which we have written about here), an interesting decision where the court reasoned that the basis for the ‘intellectual property right’ in designs is the labour and effort that goes into creating something new and original (see sweat of the brow doctrine). In that case, the Court held that mere ‘trade variations’ would not entitle a design to protection unless the new elements are new and original such as to make the design distinguishable from known designs or combinations of designs.

The Court assessed the plaintiff’s designs on the threshold laid down in Pentel Kabushiki ­– namely, the requirements of labour and time, and in turn, newness and originality in the designs. The Court then provides a short but rigorous history of footwear through the ages, with such helpful quips as “footwear is a footwear is a footwear, shoe is a shoe is a shoe and sandal is a sandal is a sandal.”

The purpose of this analysis seems to have been to ultimately lay down a precedent to make enforcement of footwear designs particularly difficult in India. The Court notes –

“All the different footwear have changed over different periods of time and also as per requirements as to who were the persons wearing the same or of the particular climatic conditions where they were worn or the footwear becoming fashion statements but ultimately all the different types of footwear are variations of nothing else but a footwear i.e foot plus wear i.e something that is worn on the feet.”

The Court held that the various design elements claimed by Crocs were merely trade variants on designs of sandals which have already existed for long, and were neither new or original enough to claim protection under the Designs Act.

Finally, the Court assessed the defendant’s claims for costs, under the Commercial Courts Act, 2015, read with Section 35 of the Code of Civil Procedure, and held that the Court had the power to order costs at the interim stage, and that, in this case, the plaintiff, in refusing to settle the interim applications with the defendants, and ‘obdurately and illegally continuing proceedings’, and imposed costs of a whopping Rs. 2 lakhs per defendant, in addition to legal costs.

In the final analysis, the Court seems to have come to the correct conclusion, particularly given the prior disclosure of the designs, which is fairly clear cut. However, in venturing into ‘newness’ and ‘originality’, the court seems to have firstly gone against the trend in returning to the ‘sweat of the brow’ principle for IPR protection, one that has been rejected in Indian Courts in the past. Moreover, the standard developed by the Court in its recent decision in Pentel Kabushiki and in the judgement at hand are rather vague and malleable.