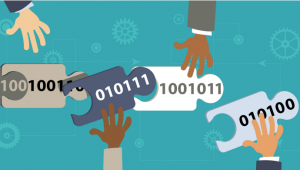 Blockchain, initially introduced as a part of the Bitcoin currency, has now proven to be the new game-changer technology in several industries, with big corporations using it for various customer-friendly services such as cross-border payment systems, electronic shipping platforms, portable health records etc. Blockchains act as databases that store records for every transaction conducted and which are distributed, indestructible, decentralized, peer-to-peer and independently verifiable in nature.

Controversies arise, however, when companies seek to patent their blockchain based services. Blockchain patents can be likened to software patents since it involves usage of application software and cryptography. It has been argued that such inventions may not be patentable since most of these services merely take an old idea (the blockchain technology) and come up with a new use.

However, one must note the fact that patents for blockchain-based services are increasingly being granted across the world, especially USA and China, with many being granted to applications of blockchain technology in banking and financial sectors. The reasons for this trend are examined within the scope of this post by examining the current legal position in USA and India.

Section 101 of the US Patent Act states the categories of inventions which are patentable as “new and useful process, machine, manufacture, or composition of matter, or any new and useful improvement”. The judicially recognized exceptions to these categories are “abstract ideas, laws of nature and natural phenomena”. A two-step test was provided in US Supreme Court’s 2014 opinion in Alice v. CLS Bank(“Alice“) to determine the patent eligibility of computer-related inventions: (1) determine whether the claims are directed to a patent-ineligible concept (2) determine whether the claim’s elements, considered both individually and as an ordered combination, contained an ‘inventive concept’ which transformed the nature of the claims into a patent-eligible application. Under the second step, claims which only contain instructions for ‘generic computer implementation’ or whose use is merely limited to ‘a particular technological environment’ would not be granted patent protection. It was stated that the claims must contain ‘additional features’ to ensure that abstract ideas are not monopolized and that such claims on ‘building blocks of human ingenuity’ must integrate them into ‘something more’. It was concluded that there must be an improvement in the functioning of the computer or an improvement in any technology or technological field. While Alice certainly has stemmed the onslaught of patents granted to vague software patents, the decision has been questioned for not defining concepts such as ‘abstract ideas’ and ‘something more’. Certain Federal Court decisions of 2016 and 2017 have elaborated on the application of the Alice test. Chief amongst them is the 2016 decision of Enfish, LLC v. Microsoft(“Enfish“), which stated that the examination of “whether the claims are directed to an improvement to computer functionality versus being directed to an abstract idea” must be done in the first step of the Alice test itself. The Court also held that the invention’s ability to run on general purpose computer did not invalidate the claims. The claims must hence focus on “specific asserted improvement in computer capabilities” and it should be ensured that the computer is not used merely as a tool. The latest Federal Court decisions of 2018 follow the same line of reasoning.

Thus, blockchain services must only be patented in USA if their claims are directed to improvements in computer functionality or underlying technology and not the blockchain technology or the blockchain-based service itself i.e., the ‘abstract idea’ which the service seeks to employ must not be patented.

India: The ‘per se’ Debate settled after Erricson

In India, Section 3(k) of the Patents Act lists that ‘computer programmes, per se’ are patent-ineligible subject matter. Previously, there has been a lot of debate about the interpretation of the term ‘per se’. In 2015, the Delhi High Court in Telefonaktiebolaget Lm Ericsson v. Intex Technologies, stated that “any invention which has a technical contribution or has a technical effect and is not merely a computer program per se” is patentable. In order to reach this decision the Court relied on the ratio of the above-discussed Alice case i.e. the invention must contribute something more than an ‘abstract idea’ and the European Court’s 1986 Vicom decision which states that an invention must result in a technical effect/contribution and declared these tests similar to each other. However, the 2016 CRI Guidelines created confusion when it stated ‘novel hardware’ was one of the requirements for patentability of computer-related inventions. The debate was then settled by the revised CRI Guidelines of 2017 where the ‘novel hardware’ requirement was removed and it was stated that the ‘substance’ of such claims have to be examined. Recent patent grants to computer related inventions by the Indian Patent Office indicate that such inventions are patentable under Section 3(k) if they provide technical solution to a technical problem by providing a practical application or an improved technical effect of the underlying software.

In India, there have been few patent applications for blockchain-based technologies by Barclays and Asadel Technologies. Though the legal position in USA and India appear to be similar, there is one hurdle which Indian patent applications for blockchain-based services will face. The 2017 CRI Guidelines specifically state that ‘database’ is a ‘computer programme per se’ and hence it is excluded from patentability under Section 3(k). Blockchains, as has been discussed before, are databases for storing transactions. In my opinion, blockchain-based services will still be patentable in India since these Guidelines are not legally binding and merely provide guidance to patent examiners. Also, since parallels can be drawn between software patents and blockchain patents, the patent application for a blockchain-based service should be granted as long as the claims are not directed at the blockchain technology itself and if it provides a ‘technical contribution’ or ‘a technical solution to a technological problem’.

Blockchain is based on open-source client software and this feature enables new users to join existing systems and other companies to copy this technology and improve upon it. Many argue that granting patents to blockchain-based services aids patent trolls i.e., non-practicing entities who guard their monopoly by using these patents as weapons for stifling innovation by small developers. It is also said that patenting such services will exclude companies from using such technology to develop further industrial applications and it may also lead to patent wars between big corporations. However, these issues are already being tackled with the help of initiatives such as Hyperledger (which aim at creating open-source blockchains and related applications), the creation of patent pools (making patented technologies available for cross-licensing to all members of such pools) and non-aggression agreements signed between companies (agreeing not to assert patents against small companies and engaging in litigation). The blockchain community is also seeking to introduce an initiative called the Blockchain Defensive Patent License, wherein all license holders will share their patents with each other and will be prevented from attacking other license holders’ patents.

However, consideration must be given to the alarming trend of the grant of overbroad patents which only cover basic functionalities of blockchain. For instance, there was a recent report about the US Patents and Trademarks Office approving a patent filing for Northern Trust’s method of using blockchain technology i.e. smart contracts to form an immutable digital record of meetings. On applying the Enfish ratio and on a perusal of the filing, the claims clearly reveal that there is no improvement to computer functionality or underlying technology since they merely use the smart contract technology to employ an ‘abstract idea’ of creating digital meeting records. The Patent Office must, therefore, carefully examine the claims at hand. In the above-described case, if the technology for creating a meeting record would have merely used the smart contracts technology as its underlying basis and significantly improved upon it, then perhaps the patent grant would have been appropriate.

One can, hence, conclude that the respective Patent Offices of USA and India may deem a blockchain-based service to be patent-eligible if, on careful consideration of the claims, it offers a technical solution to an existing problem and improves significantly on the underlying technology. However, questions of how such improvements are to be determined and what category of blockchain-based services can be granted patents need to be settled by issuance of relevant guidelines by the Patent Offices of USA and India.