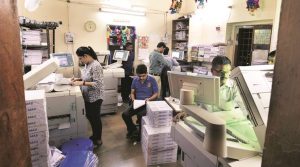 We are pleased to bring to you another guest post by our Fellowship applicant, Kashish Makkar. Kashish is a 2nd year student at NLSIU, Bangalore. This is his second submission for the Fellowship. The first submission can be viewed here.

Critical Legal Studies (CLS), a jurisprudential movement that started in the late 1970s advocated that law and politics cannot be separated. They were convinced that law is a game which was heavily loaded to favour the powerful and wealthy. However, in the DU Photocopy case, the outcome was directly opposite of what the CLS scholars would have suggested. The Single Bench of the Delhi HC (Justice Endlaw), in September 2016, delivered the verdict in a David-Goliath fashion by ruling in favour of the Delhi University and its photocopier and by extension ‘access to education’, and against the top five academic publishers of the world and by extension ‘copyright’ (the Division Bench’s judgment is discussed later). The court quite categorically laid down that the creation of course packs containing photocopies of relevant portions of copyrighted works, by a university, through a photocopier or otherwise, and their distribution to its students does not amount to copyright infringement. In its opinion, such reproduction is in the course of instruction, which, as per Section 52(1)(i) of the Copyright Act, 1957, does not constitute copyright infringement

This was an unprecedented verdict in the field of copyright law. In this blog post, I will discuss how this verdict was a result of the court’s populist outlook that led it to look at the dispute as a binary of two outcomes, one, where ‘access to education’ would prevail and, the other, where copyright would. I will argue as to how these two were not the necessary outcomes, i.e., the copyright regime in India would have remained far more efficient and access to education would have still been upheld had the court not caused the fatal omission of limiting the issue of infringement to that of a question of law and not of fact.

Before delving into the analysis of this omission made by the court, it is imperative to understand the context that led the court to approach towards the suit in a binary fashion. For this, we must appreciate the circumstances in which the suit was actually heard. Apart from the DU and the photocopier, who were the named defendants, two associations of students and academics, namely ASEAK and SPEAK, were also impleaded as defendants. These associations brought to the court the public trial that this suit was already facing on account of the massive outcry that academicians, authors, and students all over the world had generated against the suit. More than 300 academicians had rallied against the lawsuit and written open letters to the publishers to withdraw the lawsuit. These influential people of the academia had successfully projected the lawsuit as a battle between ‘access to education’ and ‘copyright’. Therefore, the court had to balance the convenience between the parties in an environment where, one, the crucial opinion-makers of the public were also defendants in the suit, and two, the public had already held against the plaintiffs.

Hence, the lines for the outcomes of the suit were already drawn in a fashion where either you would support the principle of ‘access to education’, or you would be against it.

Contrary to the expectations of a justice system that upholds efficiency in accordance with rule of law, the Delhi HC gave in to the populist pressures. The same was evident from the inception of the lawsuit as the delineation of the issue before the court reflected that the result cannot be anything but one of the two outcomes in the binary that the public had identified.

Although Justice Endlaw correctly identified that the question in the suit is whether the making of course-packs amounts to copyright infringement,an omission was made in the manner in which the same was framed. Justice Endlaw while identifying the issue noted that the question of infringement in this case was a question of law and not of fact(Para 22, 2016 SCC Online Del 5128). He observed that if the actions of the University fell under S. 52(1)(i)(i), the claim of infringement is bound to fail and if not, the activity is due for an injunction. It is this observation which makes the outcome of the suit binary and makes the entire judgment problematic.

The problem lies in that such a formulation constructs Section 52(1)(i)(i) as a blanket provision which either has a total application or no application at all. Such a blanket construction is troublesome on account of the fact that so long as reproduction of a copyrighted work is for the purpose covered under the provision, it can never infringe the copyright of the author. Essentially, whether you copy an entire book in the course of instruction or just 20% of it, you’re not infringing the copyright in it.

This could never have been the intention of the legislature. The legislature could not have intended to give permission to 100% copying even during the course of instruction as that would defeat the scheme of the Copyright Act itself. For instance, by allowing the interpretation as is provided by the court, it makes Section 32A (licencing & reprography) of the Copyright Act to be redundant. And, as per general rules of interpretation of statutes, a sound interpretation of statute cannot ever make a provision of the statute redundant.

Similarly, the above interpretation is also against Justice Endlaw’s own reasoning. Throughout the course of the judgment, it was reiterated that the course-packs were not competing with the market of the publishers as the students would have never bought the publisher’s books to read just the sections of the books which are relevant for their syllabus. Hence, it was reasoned that there is no harm to the commercial interests of the publishers. However, in construing the issue as a question of law and not fact, the court didn’t end up placing a limit on the publication allowed. As a result, it’s own reasoning of course-packs not competing with publications falls flat as this omission actually allows a full-fledged reproduction of copyrighted works too.

It is pertinent at this point to examine how the situation would have been different had the question not been constructed in this fashion.

Infringement as a Question of Fact: A Way More Efficient Paradigm

Had the construction of the issue not been in the above form and court would have examined the issue as a question of fact too the outcome would have been substantially better. The same would be due to two reasons:

And two, this would have led the court to examine the issue from the licensing perspective, which was in fact the prayer of the plaintiffs. Since the court would have examined the extent to which the reproduction was done, it would have necessarily observed that till a certain threshold the reproduction amounts to be within the course of instruction and beyond that the only way out is to be via licencing, since by no means must the publishers bear all the costs for access to education.

Therefore, the other paradigm is more efficient for all the stakeholders.

Certainly, the deficiency in the delineation of the issue was identified by the two-judge bench of the Delhi HC where the decision of Justice Endlaw was appealed. (Para 80, 2016 SCC Online Del 6229). Therefore, this allows any finding that will come out in this regard be limited to the set of facts raised in the suit (i.e. course-packs which will have an upper limit of copying from copyrighted works). Unlike, the single-bench judgment that allows the interpretation to be blanket, since, it held that it is a question of law and not limited to the facts of the case.

However, soon enough the suit was withdrawn by the publishers. Therefore, the law stands undefined in respect of the permissible limit of reproduction of a copyrighted work in the course of instruction. However, one thing that remains defined is that politics and populism have come to define the law of the land so much so that the outcomes of the suits get reduced to the binary that the public perceives it to be, irrespective of what may be efficient and be in accordance with the rule of law.