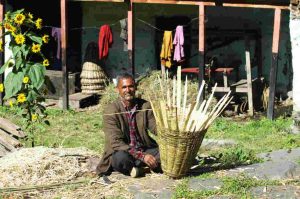 Earlier (quite a few years ago!), Prashant had reported a 2008 order of the Himachal Pradesh High Court, wherein the Court had examined the validity of the Patent No. 195917, a patent granted to the plaintiffs for a “device used for manually hauling agricultural produce”, on the basis of its alleged similarities to a traditional handicraft called “kilta” (an-all-purpose bamboo basket used to carry any type of load, supported by a rope and tied to the forehead). In this case, the plaintiffs had averred that the respondent had infringed their patent rights by manufacturing the patented device and by selling it to the Himachal Pradesh Government and they had filed for a permanent injunction against this, which was subsequently denied by the Court.

This case serves as a typical example of pendency of litigation in Indian Courts since the matter, which was initiated by a suit filed in 2005, has been pending for 13 whole years. It only recently came into light on 29th June 2018, when a single judge bench of the Himachal Pradesh High Court revoked the aforementioned patent grant. Though the parties’ arguments and the Court’s deliberations in its latest decision mostly remain similar to the ones in its earlier order, I will briefly recap it for the benefit of our readers.

The plaintiffs claim that the inventor of the patented product, Dhanpat Seth, based his invention on the kilta but improved upon the same by inventing longer baskets made up of synthetic polymeric material and by attaching removable harnessing which enabled farmers to tie the basket to the waist instead of the forehead. In effect, they claimed that this produced better orthopedic results since the traditional kilta used to cause severe back pain to farmers.

The defendants, on the other hand, contested the suit by stating that the patent had been incorrectly granted. They mainly argue that the patented product is not an “invention” under Section 2(1)(j) of the Patents Act, 1970 since it lacks novelty and an “inventive step” i.e., it is merely an application and a “workshop improvement” upon the kilta, which was well-known long before the prior date of the patent application.

The Court based its decision on several provisions of the Patents Act, 1970, few of which I have discussed below:

Section 2(1)(ja): Clearly, the plaintiff’s product merely amounted to a “plastic kilta”, as has rightly been pointed out by the Court. The Court applied the test of “inventive step” defined under Section 2(1)(ja) i.e., whether the product undertakes “technical advance, as compared to existing knowledge” and/or whether it has “economic significance”, that makes the invention not obvious to a “person skilled in art”. It was decided that the defendants had successfully proven their case by showing that changes in size or that of raw material could not contribute to a “technical advance” or have “economic significance”. Since their product did not have any significant inventive features and bore striking resemblance to the kilta, it was decided that the patented product would appear obvious to a “person skilled in art”.

Section 3(d): The Court held that the product attracts Section 3(d) since mere replacement of raw material (bamboo replaced by plastic) amounted to merely a “new discovery of a known substance” i.e., the traditional kilta and that there was no “enhancement of the known efficacy” since the orthopaedic superiority of the product was not aptly testified by any surgeon.

Section 3(p): Stating that the kilta had been used in the “countryside of Himachal Pradesh since times immemorial”, the Court stated that the same amounted to “traditional knowledge” under Section 3(p) and that the product was a “mere aggregation or duplication of traditionally known components”.

Based on the above deliberations, the Court revoked the patent grant under Section 64 of the Patents Act, 1970.

How exactly did the Patent Office grant Patent 195917?

The plaintiffs had applied for the patent grant on 24th June 2002, a day after which Section 3(p) was inserted into the Patents Act vide the Patents (Amendment) Act, 2002. A perusal of the First Examination Report, dated 19 June 2003, for Patent 195917 reveals that the Examiner of Patents and Designs clearly did not apply his mind while examining the patent application of the plaintiffs. In the Report, it is merely stated that the product was not an invention under Section 2(1)(j) and that it lacked an “inventive step” .They cited the introduction of lightweight nylon baskets for tea-pluckers in Sri Lanka as prior art.  Surprisingly, they did not consider the local example of the kilta as prior art or give consideration to the fact that the patent grant may be barred under Section 3(p). Later, in 2004, the application for the patent was accepted and the Examiner’s reasons for doing so were not specified. It is, hence, quite baffling and mysterious that the Patent Office granted a patent to the plaintiff’s product, despite existing prior art and when it was so clearly based on the traditional kilta.

The question, therefore, still persists; how is the Patent Office to define “traditional knowledge” and conclude that a patented product stands barred under Section 3(p)? Judicial interpretation on the same is required for efficient examination of future patent applications based on Indian traditional knowledge and prevention of needless and lengthy litigation.