In July I had written about how I had filed applications under the Right to Information Act, 2005 seeking information from the government regarding assertions made in a news report by Vidya Krishnan of the Hindu in March of this year. A copy of the Hindu’s report was appended to my RTI application.

In her report, Krishnan had mentioned that the government had requested Janssen and Otsuka for voluntary licenses for their new TB drugs, bedaquiline and delaminid and that both companies had turned down the requests. Krishnan also stated in her report that Dr. Soumya Swaminathan the then Director General of the Indian Council of Medical Research (ICMR) [she is currently the deputy DG of the WHO] had chaired a panel in September 2017 recommending that the government issue a compulsory license for bedaquiline and delaminid. 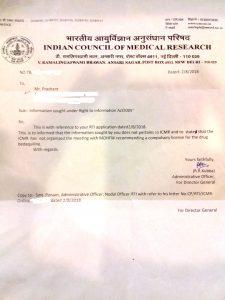 After following up with ICMR, I finally received a reply (display left) from the Administrative Office for the Director General stating that ICMR never held any meeting with the Ministry of Health recommending a compulsory licence for the drug bedaquiline.

ICMR’s reply is in complete contradiction to the following assertion in Krishnan’s report:

“On September 19, 2017, a panel chaired by Dr. Soumya Swaminathan, then Director-General of the Indian Council of Medical Research and currently the Deputy Director-General of the World Health Organisation (WHO) recommended, among other steps, that the Health Ministry consider issuing a compulsory licence (CL) for the two TB drugs.”

After receiving a reply from ICMR, I wrote the following email to Dr. Swaminathan:

By way of introduction, I’m an Assistant Professor at the National Academy of Legal Studies & Research (NALSAR), Hyderabad where I teach intellectual property law.

For the last several months, I have been trying to get copies of this panel report mentioned in this Hindu report where you allegedly recommended the issuance of a compulsory licence for bedaquiline: https://www.thehindu.com/sci-tech/health/extreme-tb-no-licence-to-heal/article22920634.ece

So far, the Ministry of Health, DGHS, the CDSCO and ICMR have all claimed that they do * have a copy of any such report. Can you please confirm whether the statement attributed to you is true: “On September 19, 2017, a panel chaired by Dr. Soumya Swaminathan, then Director-General of the Indian Council of Medical Research and currently the Deputy Director-General of the World Health Organisation (WHO) recommended, among other steps, that the Health Ministry consider issuing a compulsory licence (CL) for the two TB drugs.”

(edit: * I should have stated that all three authorities “claimed that they did not have a copy of any such report” – the error is regretted)

It has been a week and I have not yet received a response from Dr. Swaminathan.

The question that I would like to pose to our readers is this – Did Krishnan simply manufacture the information regarding Swaminathan’s recommendation for a compulsory licence as well as the supposed failed negotiations for voluntary licenses with Janssen and Otsuka? If any of her assertions are true, why is it that nobody in the government has a shred of paper to back her assertions? Why has ICMR denied making any recommendation for a compulsory license for bedaquiline?

I normally would not bat an eyelid if such a news report appeared in other newspapers but I’ve been a reader of the Hindu since I first started reading newspapers as a kid. For all its shortcomings, I tend to believe news published in the Hindu because they have a reputation for publishing facts after verification. However, I have noticed glaring issues with Krishnan’s health reporting. A few years ago, she published a front-page story on a whistleblower at GVK Bio – like many of her stories, it was well written but unfortunately with little truth to it. At the time I was a lawyer for Dinesh Thakur, who had also been contacted by the whistleblower – I assisted Dinesh in researching two pieces that he published on the Wire where he blew huge holes into Krishnan’s reporting. Thus, the bedaquiline compulsory licensing story is not the first case of her facts not adding up.

I can understand journalists getting some facts mixed up in a rush to meet crazy deadlines but the bedaquiline story is not one of those cases. There is simply no trace of any evidence in government records that backs Krishnan’s claims. The question therefore is whether Krishnan published fake news on the front page of the Hindu?